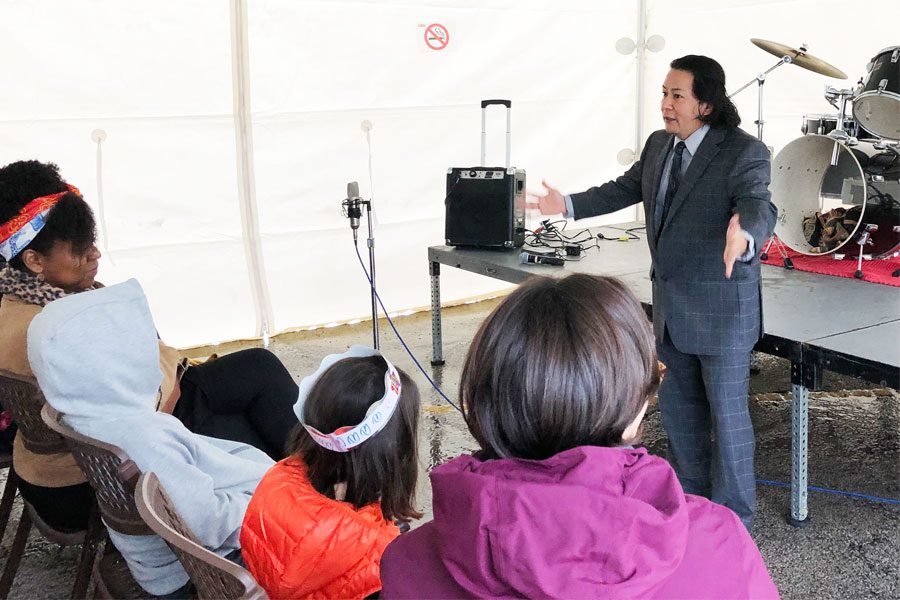 Laughter, squeals and jazz muffled the downpour as around 30 residents gathered outside the new Robert Crown Center to celebrate the 100-day countdown to the opening of an Evanston Public Library branch in the community center.

The new branch is part of a $53 million community center expansion project. In addition to two full-sized ice rinks, an indoor track and a daycare center, the renovated community center will host a 6,000-square-foot library.

Jill Schacter, EPL’s marketing and communications coordinator, said opening a library within a community center is an “innovative kind of model.”

“There will be a lot of synergy between families taking their kids to preschool or taking their kids skating, and then there’s a library,” she said. “Having a run in the running track and pick up a book on your way out.”

The event’s activities and speakers reflected the library’s increased outreach to the Latinx community. Mexican-born designer Rafael Robles, who was one of the first recipients of the Deferred Action for Childhood Arrivals designation, as well as stand-up comedian Sonal Aggarwal, spoke at the countdown. Henna artist Shruti Vijay applied mehendi as a continuation of the library’s Diwali celebration, and The Beantet, a jazz combination of Evanston Township High School students, performed.

The library currently has three locations: Main Library in the 1st Ward, the Chicago Avenue-Main Street branch in the 3rd Ward and the Central Street branch in the 7th Ward. Library director Karen Danczak Lyons said she noticed a gap in library accessibility for southeast Evanston residents. The Robert Crown branch, which is located in the 4th Ward, intends to serve primarily Latinx residents who live too far from the library’s other branches to access them.

Latino outreach librarian Mariana Bojorquez said the new branch will incorporate programming directed toward Spanish-speaking residents, including ESOL and citizenship classes. It will also host a “sizable” Spanish collection of children’s, young adult and adult books. Bojorquez said she expects the branch will serve students from nearby Washington Elementary School, which has a Hispanic population of 35.8 percent.

With a library card, residents can access the library before and after normal hours as part of its “open plus” plan, Danczak Lyons said. She added that the branch will host Sunday family programs and have a teacher available for academic tutoring, promoting community engagement.

“The bigger the branch, the more impersonal it becomes,” she said. “Libraries are really about community building, and if that goal isn’t achieved it really is just a waste of space.”

Bojorquez said she hopes the new branch encapsulates this sense of “coziness.”

“Main is big and it’s beautiful, but there’s something about a branch in your neighborhood that just makes it cozy,” Bojorquez said. “You really get to know the librarians there, and the staff really gets to know the people. I’m really excited to be able to forge that type of relationship with the neighborhood.”