Rebecca Makkai awarded for novel about Chicago during the AIDS epidemic 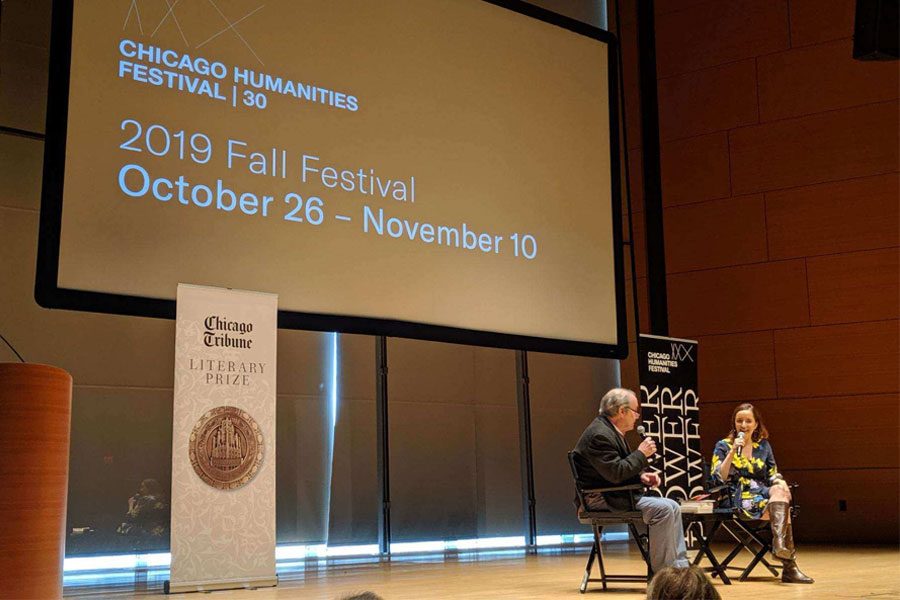 Before receiving the 2019 Chicago Tribune Heartland Prize for Fiction on Sunday, Rebecca Makkai, a Chicago-based author, spoke in-depth about her experiences as a writer and how her award-winning novel ‘The Great Believers’ took shape.

The talk and award ceremony took place in Ryan Center as part of the Northwestern Day of the 30th annual Chicago Humanities Festival, a year-long program that works to connect people and ideas that shape humanity.

Makkai spoke with Rick Kogan, a Chicago Tribune columnist. Throughout the talk Kogan praised the book, saying it was “one of the most ambitious novels” he’s ever read.

‘The Great Believers,’ set during the 1980s at the height of the AIDS epidemic, focuses on the intertwining stories of Yale Tishman, the director of a Chicago art gallery, and Fiona, who is the sister of Tishman’s best friend. The novel deals with themes of friendship and redemption in the face of death and hardship.

During the conversation, Makkai said she hadn’t originally planned to make the AIDS epidemic the main issue of the novel — it was supposed to be a subtext. But then she said she realized that she didn’t want AIDS to be just another sidenote.

Makkai said she wanted to avoid telling a generalized story that plays into what most may think when they hear “AIDS epidemic.” The typical narrative, Makkai said, is that AIDS affected young, white men in New York and San Francisco, and that it’s an issue of the past.

Makkai said one of her main goals for the novel was to achieve granular realism — a great sense of detail — in her depiction of 1980s Boystown.To achieve this, she said she read every back-issue of the Windy City Times, a LGBTQ+ Chicago newspaper, and reached out to many people who have remained active in LGBTQ+ and AIDS activism in Chicago.

She said not being a part of the community or history made writing the story terrifying at times.

In order to avoid mistakes, Makkai said she had a trio of editors who had experience with the AIDS crisis who meticulously edited her drafts throughout the writing process and told her “any little thing that wasn’t right,” even if it meant telling her to completely restructure and change the story.

Sherrie Gauley, a Chicago resident who attended the talk, said she loves that the novel is set in Chicago, and after listening to the conversation she wants to read more of Makkai’s stories.

“I didn’t realize that so few books had been written about the AIDS epidemic,”Gauley said. “I think she made a terrific point that we probably have a misconception that it’s behind us when there are still people dealing with it, suffering, and it’s important.”