Football: Northwestern’s defense wears down in loss to Iowa 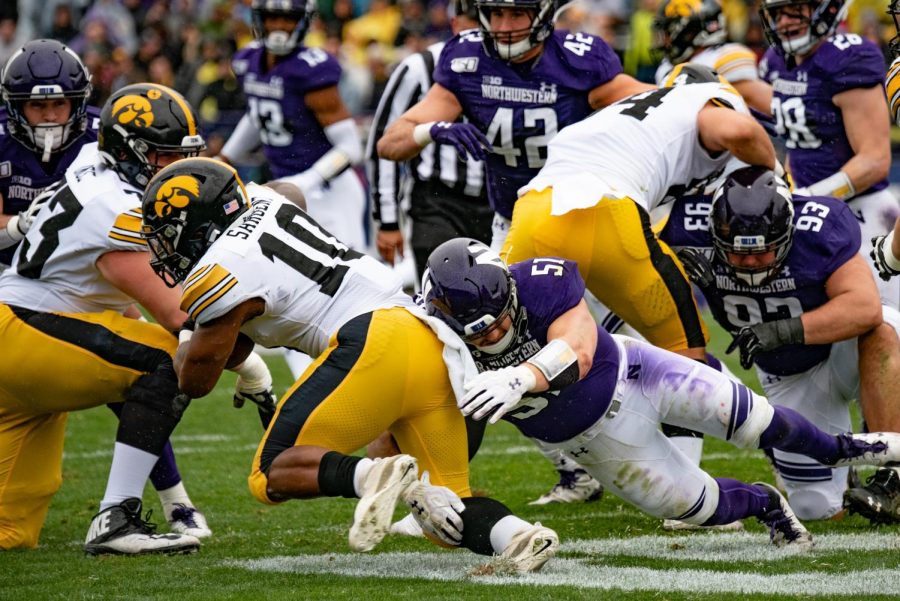 Blake Gallagher makes a tackle on an Iowa runner. The junior linebacker led the team with 10 tackles.

With a defense asked to carry as much weight as Northwestern’s is right now, injuries are going to take their toll.

With sophomore Trevor Kent and junior Earnest Brown IV both missing from the defensive line Saturday against No. 20 Iowa, the Wildcats’ defense gradually wore down in a 20-0 loss. The unit has not produced a turnover since junior safety JR Pace’s interception Sept. 28 against Wisconsin.

“We have a handful of younger pups getting a lot of reps,” coach Pat Fitzgerald said. “The next guys have to step up and play to the best of their ability. I’ll watch the tape to reserve judgments on a lot of those things.”

Among those “younger pups” in the defensive front were redshirt freshman Wyatt Blake and true freshman Jason Gold. Blake played in his third game of the year and has not accumulated any statistics in any of them. Gold saw his first collegiate action Saturday and had a decent showing, recording a tackle for loss and a quarterback hurry.

But NU (1-6, 0-5 Big Ten) missed out on several opportunities to get its defense off the field. On the final play of the first quarter, with the Cats down by just seven, the Hawkeyes (6-2, 3-2) faced a third and eight at their own 48-yard line. But running back Mekhi Sargent went straight up the middle on a draw play for 13 to move into NU territory.

Later in the drive, the Cats were unable to stop a quarterback sneak by Nate Stanley on third and two, which moved Iowa into field goal range. The Hawkeyes would eventually kick a field goal to extend their lead to two scores.

Junior linebacker Blake Gallagher, who led the team with 10 tackles and also had a pass breakup and a quarterback hurry, said NU’s mentality is to have the backups prepare the same way as the starters.

“We just need to keep swinging,” Gallagher said. “I’m not punching (the ball out) enough, some other guys aren’t punching enough. We’re not working the ball right now.”

Early in the second half, NU’s defense had another chance to make a stop in Iowa territory. But Tyler Goodson, the Hawkeyes’ third running back on the depth chart, ran straight up the middle 12 yards on third and seven. Iowa converted a fourth and eight later on a quick pass into the flat, and ultimately scored a touchdown to make it a 17-0 game.

While the front seven was banged up and struggled at times Saturday, the secondary was not blameless either — the Hawkeyes completed two passes for more than 40 yards. The Cats have only made two interceptions in seven games all season, with just one of them by a defensive back.

Both starting cornerbacks, sophomores Greg Newsome II and Cameron Ruiz, got hurt Saturday, though both returned to action in short order. On top of Newsome’s and Ruiz’s injuries, senior Trae Williams is still making his way back — he played briefly last weekend against Ohio State but had not seen the field before that since Sept. 14.

But Williams missed a key tackle on Iowa receiver Tyrone Tracy on what turned into a 50-yard touchdown in the first quarter.

“We talk about tackling and turnovers — those are the two most important things you have as a defense that you can control,” Fitzgerald said. “If you tackle well and you create turnovers, you give your offense more opportunities, short fields and momentum. Right now, the turnover aspect is not happening.”