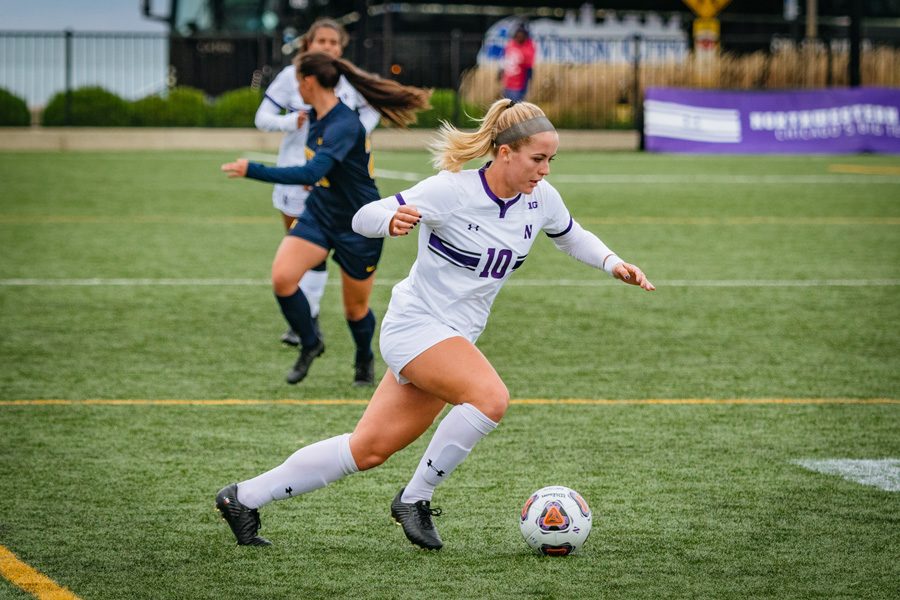 Sophomore forward Olivia Stone dribbles the ball to the offensive half against Michigan.

We’ve all had that feeling. When you wake up on the wrong side of the bed. When your shoelaces keep coming undone. When the weather app is wrong. When the computer takes a little bit longer to load.

Days and nights that make you shake your head, and it seems everything is conspiring against you. For Northwestern on Thursday, this feeling manifested itself after a game-long effort of quality defending and organization was undone in the final few minutes by bad luck and a couple of inches.

The Wildcats lost a tight game to Minnesota by a score of 1-0. But the loss wasn’t the only bad news to come out of the game. Freshman defender Danika Austin’s knee injury, occurring during a non-contact play in the game’s first minute, changed the complexion of the season and the team’s mentality.

“It’s even more than what she contributes as a player,” coach Michael Moynihan said. “Any time you see a knee injury, a lot of girls get really emotional. It’s a tough thing. We were not playing well in the opening part of the game, and I think a large part of it might have been influenced by that.”

After their initial struggles, NU (5-9-3, 3-5-2 Big Ten) stabilized, holding the Golden Gophers (3-11-4, 2-6-2) to six shots on goal and forcing two saves from Minnesota’s goalkeeper Maddie Nielsen. Minnesota’s 14 combined shots were the fewest the Cats had allowed since October 11, when they held Michigan State to just nine.

In the 81st minute, Gophers’ midfielder Katie Duong fired a long-range curler that rang off the crossbar and back into play before being gathering into the waiting arms of sophomore goalkeeper Mackenzie Wood. On the field, it was not called a goal

But the referees went to the video replay system, and after a long period of review, they confirmed the ball had just barely broken the plane of goal.

“I haven’t seen the replay but apparently it was in the goal,” Moynihan said. “I don’t know. They did enough.”

The loss doesn’t help the Cats’ chances of qualifying for the Big Ten Tournament with a forthcoming matchup with No. 9 Wisconsin on Sunday.

Sophomore forward Olivia Stone said the lessons from this game, and other losses from this season, will help them against the Badgers.

“We came in fired up, ready to beat this team,” Stone said. “We’re a young team, we’ve learned these lessons throughout the season. I definitely think we’re putting them in our belt as tools, and we’re going to use them against a mature team like Wisconsin, going in, nothing to lose, proving ourselves and our program.”

This season, the Badgers have outscored their opponents 22-7. They’ve dominated in shot totals too, firing 220, and allowing only 125. Wisconsin has also compiled 107 corner kick opportunities, facing off against just 63.

For NU to secure its playoff spot, it’s going to need to rely on a tight defense and high work rate.

“It starts now,” Stone said. “Hydration, sleep, rest. We’re just looking to get a result again. We just have to prepare like we have for every game this season and go out and fight.”