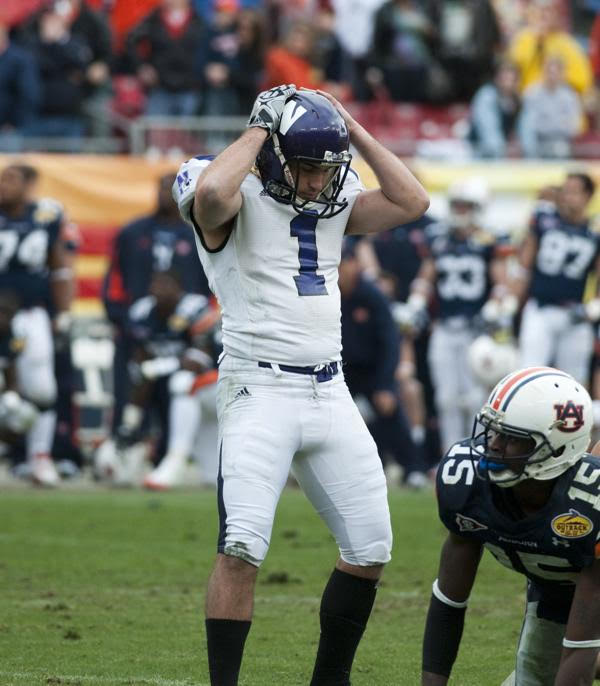 Kicker Stefan Demos missed two field goals and an extra point as the Cats fell in overtime for the second straight year in a bowl game, losing 38-35 to Auburn.

On Jan. 1, 2010, Northwestern was on the precipice of what was once thought to be impossible: a bowl victory.

It was 61 years to the day since the Wildcats had claimed their only bowl victory. But in the time between they had been close — close at the 1996 Rose Bowl and closer at the 2008 Alamo Bowl just over a year prior. But, until NU finally broke the futility streak in the 2013 Gator Bowl, the 2010 Outback Bowl was the best chance the Cats had to vanquish it demons.

“The nickname Cardiac Cats is there for a reason,” former superback Drake Dunsmore said. “There were so many great back and forth games. But that had to be the No. 1 game that sticks out in my mind.”

That 2009 NU team, which lost the 2010 Outback Bowl in overtime on a fake field goal, finished the season with an 8-5 record. It’s not the best team in school history, but it has remained one of the program’s most memorable.

The first unforgettable moment came on Nov. 7 against an undefeated Iowa outfit ranked No. 4 by the BCS at Kinnick Stadium in Iowa City, Iowa. The Hawkeyes, led by quarterback Ricky Stanzi and a ferocious defense, jumped out to a 10-0 advantage.

But Stanzi got hurt in the second quarter, and the Cats’ defense held Iowa offense to only 281 yards and 14 first downs as they pulled off the monumental 17-10 upset.

The victory was the first time Fitzgerald led the team to a victory over a top-10 ranked team, and it derailed the Hawkeyes’ hopes of playing for a national championship.

While Dunsmore — who caught a four-yard touchdown pass to give NU the lead it never relinquished — doesn’t remember much of the post-game celebration on the field, there is one image that stands out in his mind.

“I remember just pulling out of the stadium and just seeing the most dejected fans I had ever seen,” Dunsmore said.

After a 21-16 victory over Illinois for the Land of Lincoln Trophy the following week, NU ended its season against ranked Wisconsin at Ryan Field.

Up 33-31 with only a few minutes remaining, safety Brian Peters forced Wisconsin’s John Clay to fumble the ball with only 1:44 remaining. After NU punted one final time, Jordan Mabin secured the victory with an interception in waning seconds, sending the purple fans in the crown rushing onto the field.

“We had a ton of guys playing incredibly on both sides of the ball that day,” Peters said. “We played sound defense across the board. Sherrick (McManis) was balling.”

The Cats’ eight wins were enough to earn them a spot in the Outback Bowl on New Years Day. Going up against Auburn at Raymond James Stadium, NU was down 14 points in the third quarter, but behind an infamous performance senior quarterback Mike Kafka, the Cats clawed their way back to tie the game at 21.

But then the Tigers went up two touchdowns again, this time in the fourth quarter, but once again, NU tied the game. After a fumble on a kickoff by Auburn in the last minute of the fourth quarter, NU missed a potential game-winning field goal at the end of regulation.

The Tigers kicked a field goal to start overtime, and then chaos ensued. At one point, Kafka fumbled the football and Auburn recovered, but the referee ruled the quarterback down. Later, Stefan Demos missed a field goal, but a roughing the kicker penalty gave the Cats new life. With Demos injured following the penalty, Fitzgerald went for fake field goal to win the game, but it failed.

Kafka finished with an absurd 47 completions on 78 attempts, compiling four touchdowns and five interceptions. He also carried 20 times for 29 yards. On the other side, Auburn running back Ben Tate rushed for 108 yards and two scores.

“I would have liked the legacy to be the first bowl win for Coach Fitz, but unfortunately that wasn’t the case,” Dunsmore said. “I don’t want to say it was the first season, but it was one of the early seasons that cemented Coach Fitz as a top tier coach in the Big Ten.”

The 2009 team wasn’t the one that ultimately broke the bowl win drought for NU, but there’s no question it had a massive impact on the program. Kafka played in the NFL and is now the quarterbacks coach for the Kansas City Chiefs, credited with playing a role in the development of NFL MVP Patrick Mahomes. Peters played four years with the Houston Texans and was a Grey Cup Champion with the Saskatchewan Roughriders.

McManis is the only active NFL player from the 2009 team, as he’s enjoyed a long career as a special-teamer for the Chicago Bears. Defensive lineman Corey Wootton was drafted in the fourth round of the 2010 draft and played five years in the NFL.

“We had a couple of great houses of guys too, so everybody was around it each other on and off the field,” Peters said. “Probably the best locker room while I was there for sure. It was just a tight-knit group of guys.”

According to the athletic department, 40 players from the 2009 team, plus a handful of student managers and trainers, will return to Evanston this weekend for Homecoming. Leading the pack as honorary captain is Brendan Smith.

Smith was a two-time captain for the Cats, and at this week’s presser, Fitzgerald said he named his youngest son after the former safety. Smith told The Daily that it is probably the greatest honor of his life.

For Smith, the opportunity to be back in Evanston this weekend with his former teammates and representing them as honorary captain is surreal.

“I have goosebumps right now thinking about it,” Smith said. “I gave my body to it, to this school, that program. To know that they’re still thinking of me 10 years later is unbelievable.”