Football: After Cam Green’s retirement, NU has struggled to fill the void at superback 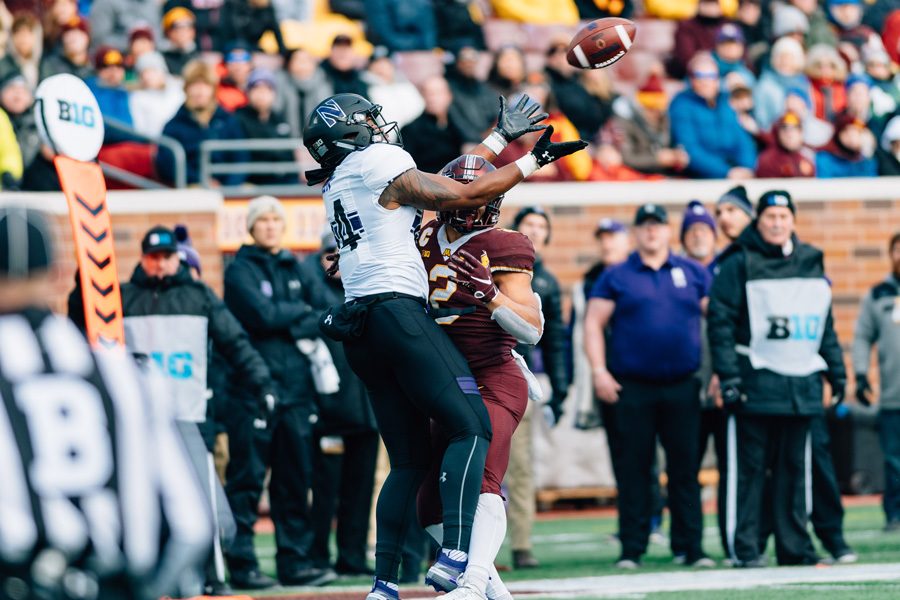 Cameron Green reaches to catch a pass during a game last season. The Wildcats have struggled to replace Green at superback this season.

Coming off of the best season of his career, then-junior superback Cameron Green looked ready to become a key piece in Northwestern’s offensive puzzle in the 2019 season.

But right before the Wildcats’ first spring practice, Green announced that he was stepping away from football due to head injuries within his family.

Many teams embrace the “next-man-up mentality” — and NU had no choice but to do the same after Green’s retirement. But the superbacks on the roster this season haven’t been able to put up the same level of production; in fact, they’ve barely helped in the struggling passing game at all.

“We have not stepped up at superback,” superbacks coach Bob Heffner said. “We’ve worked hard, we’ve practiced hard, but when it comes to a game situation, we haven’t put it together.”

During the offseason, there was a position battle to see who would get the starting nod. Coach Pat Fitzgerald, Heffner and staff looked at the superbacks room and even went outside of it. First Trent Goens switched from defensive end, and then Jason Whittaker stepped up from quarterback. However, when senior quarterback T.J. Green got injured, Whittaker switched to his original position.

Ultimately, on the first two-deep of the season, sophomore superback Charlie Mangieri started against Stanford. Mangieri, along with Heffner, said the superbacks performed well as a group in the Cats’ opening game — but it’s been downhill since that game.

“We took a couple of steps back from that game on,” Mangieri said. “We got to come back and just prove to the coaches, prove to the fans that we’re a worthy group and just keep doing our thing that we know we can do.”

This season, Mangieri has started every game for NU but had just three receptions for 16 yards, hasn’t recorded more than one reception in any game and hasn’t caught a pass since Wisconsin almost a month ago.

As for his fellow superbacks? They’ve caught just as many passes this season as Mangieri has in the past month.

In order to turn the team’s offense around and increase the level of play at superback, Heffner said he needs to coach his players better. He wants to focus on the fundamentals, but Heffner said the list of improvements is too long to go through.

While Mangieri agreed that the superbacks need to work on the fundamentals, he also said part of the positional struggles could be a result of not playing enough with their instincts.

“Maybe it’s just a little mental thing, just focusing too much on fundamentals,” Mangieri said. “I can’t speak for any of the other guys, but I know I’ve struggled just trying to be perfect and make too many blocks instead of just reacting.”

It’s hard to strive to be perfect, but especially at the superback position, where previous NU players have set a high standard. Since Heffner took over as superbacks coach in 2009, the Cats have thrived, from Drake Dunsmore, who was a first-team All-Big Ten selection in 2011, to Dan Vitale and Garrett Dickerson, who played for the Green Bay Packers and New York Giants, respectively.

But while previous superbacks have set a high bar, Heffner believes that the current players on the roster can generate the same level of production — it’s just a matter of executing.

Aside from Mangieri, NU also has a few other options, including junior Trey Pugh,

“The talent factor in the room is not the problem — there’s two problems right now,” Heffner said. “One, I need to coach better and two, they need to perform better on Saturday. It all starts with fundamentals and just going out there and letting it fly.”