Chang: Studying abroad is too Eurocentric 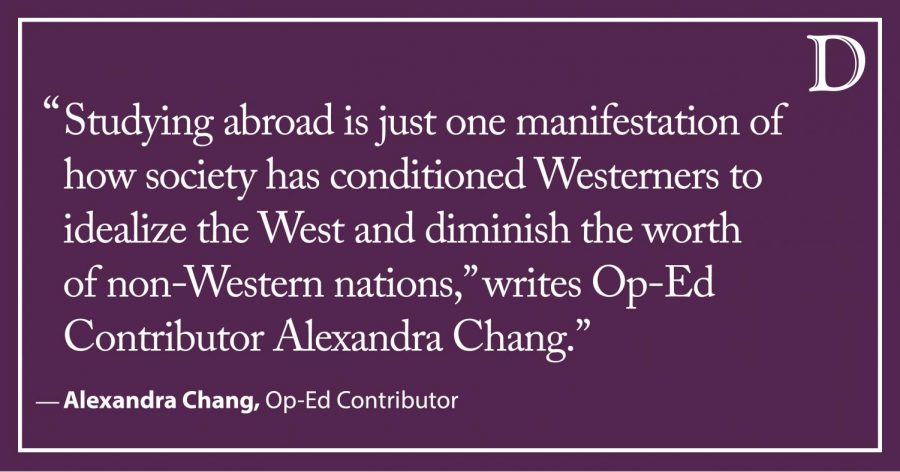 Studying abroad has become an increasingly quintessential part of the undergraduate experience. Students often return to Northwestern and rave about the “life-changing” experience of living in a foreign country, as well as the “culture shock” of living outside of the United States. While I believe that there are many valuable benefits to studying abroad for a few months during undergrad, it’s important to acknowledge the Eurocentric norms of study abroad.

Of the 144 Northwestern, Northwestern-exchange and Northwestern-affiliated study abroad opportunities listed on the Global Learning Office’s website, 71 — nearly half — of the programs are in Europe, despite non-European regions comprising the vast majority of the globe. With its rich history and beautiful architecture, Europe offers an abundance of exciting adventures for young people, whether that be visiting a new museum every week or traveling by train to the dozens of other major cities just hours away. This is the idyllic, stereotypical image of study abroad, and admittedly, I was once entranced by its allure, hoping to study in Paris — despite not speaking a word of French.

Studying abroad is just one manifestation of how society has conditioned us to idealize the West and diminish the worth of non-Western nations. This norm of traveling to Europe as opposed to the plethora of other countries in the world only further feeds the narrative that non-Western peoples, cultures and educational systems are inferior.

Some defend the European study abroad experience, arguing that universities in the West provide a superior education, which may hold merit, given that European nations are generally some of the wealthiest countries in the world. I would suggest that most students go abroad not because of the quality of education they will receive while visiting the university, but rather, to try living outside of the United States in a new environment. If students were truly motivated to receive the best education possible, the most sensible option would likely be to stay at Northwestern, one of the best educational institutions in the world.

Furthermore, the belief that European universities are higher-caliber than those in Africa, Asia or South America is largely due to Western educational standards and is simply untrue. The majority of the ways in which we assess the quality of an institution are by how well they conform to Western norms. As such, students overlook the skills they could gain by experiencing a different style of education that they would never be exposed to in the U.S. or Europe.

Students could also gain a fresh perspective on the issues they learn about at Northwestern. During my time studying abroad at Yonsei University in Seoul this past summer, I took a course on Chinese foreign policy. Although we offer similar courses here, I wanted to learn about Chinese politics from the South Korean viewpoint. From the course, I acquired new knowledge that drastically differed from how the topic is covered in political science classes here. Possibly even more valuable, however, was learning about China without exclusively relying on anti-China rhetoric, which is the norm in America.

Additionally, living in Europe is not as much of a culture shift as living in Asia, Africa, South America or the Middle East. Studying in one of these regions would likely provide students with a higher level of the “culture shock” they claim to seek, allowing them to better appreciate non-Western lifestyles.

A way that Northwestern can attempt to confront this is partnering with more institutions in non-Western countries. For example, GLO offers eight programs in Spain alone, yet in every other Spanish-speaking country — which is most of Latin America and South America — there are only 20 programs in 11 countries. Rather than perpetuate the notion that a European study abroad experience is superior, I encourage the GLO to expand the number of opportunities to study in non-Western regions and provide support for developing these programs, including additional promotional materials or academic scholarships.

Finally, I would like to acknowledge the fact that this issue spans much further than Northwestern. The Eurocentricity of study abroad programs is just one example of our Western-oriented values. Accordingly, we must dismantle the idea that the best study abroad experience is one that takes place in Europe.

Alexandra Chang is a Weinberg sophomore. She can be contacted at [email protected] If you would like to respond publicly to this op-ed, send a Letter to the Editor to [email protected] The views expressed in this piece do not necessarily reflect the views of all staff members of The Daily Northwestern.