Evanston-based artist Ben Blount draws on the city for inspiration 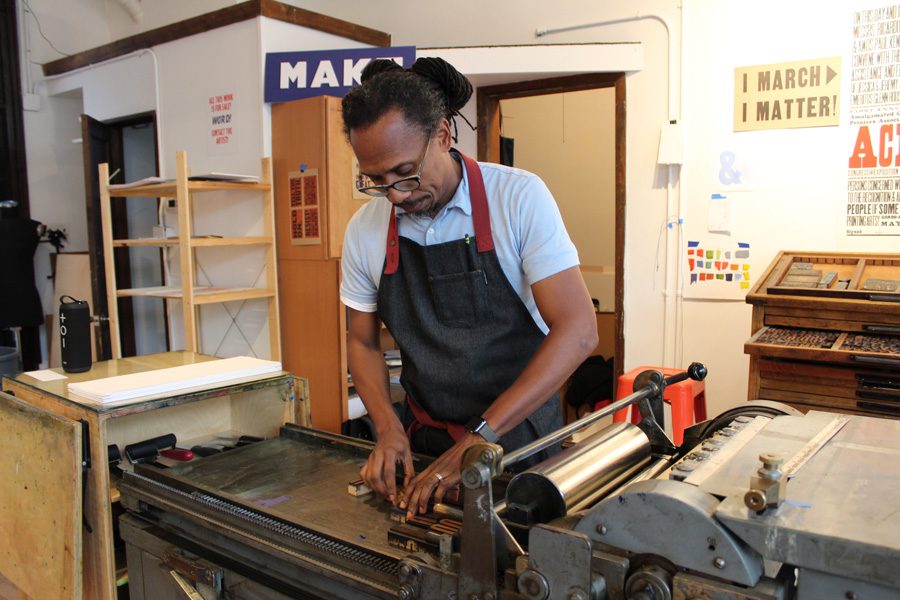 Local artist Ben Blount creates prints dealing with topics like race, inequity and identity. His work is often inspired by Evanston residents and topics of conversation in the city.

Evanston artist Ben Blount draws upon many sources of inspiration for his work. Sometimes he’ll get an idea for a piece from a post on Facebook. Other times from discussions with friends. On a Martin Luther King Jr. Day years ago, Blount’s friend — a black woman — talked to a coworker — a white woman — who said, “If we had a day off every time a black man got shot, we would never go to work.”

Blount said he “couldn’t believe someone would say something so absurd.” He laughed at first, but said he “sat on” what he heard for almost two decades.

“I just kept playing it through in my head,” Blount said. “Having a day off from work because a black man got shot would mean the day would be a holiday, so I made that the premise of one of my pieces.”

That piece, titled “275 Holidays,” premiered in 2017 in an exhibit called “Recollection” in Evanston. It is a large hanging print, covered with calendars for each month of 2017. Red dots placed on specific dates denote the murder of a black man in Chicago in 2016. Some dates have no red dots, while others have up to seven. Along the side of the print are the names of the men who were killed. Blount also created a smaller version of the piece in the form of a page-a-day calendar.

Blount said “275 Holidays” is one example of the type of art he seeks to share, exemplifying techniques he uses throughout many of his works. He trained in graphic design at Washington University in St. Louis as well as book and paper arts at Columbia College Chicago. Blount creates art from letterpress, type and the book form. His prints often revolve around themes like slang, stereotypes and white supremacy.

“My work is usually a response to what’s going on in the world,” said Blount. “I’ll see something and want to make commentary, which is often about identity, race and culture.”

Blount was born and raised in Detroit, but always wanted to end up in Chicago. His mom grew up in Evanston, and he visited the area as a child. This led him to Columbia College for his master’s degree. Blount, however, said the degree “didn’t change his life that much.” For years, he didn’t create anything or share art in public settings.

That changed after moving to Evanston five years ago. He is now a featured artist at Lisa Degliantoni’s gallery, 1100 Florence, and a member of Evanston Made, the local arts organization of which Degliantoni is the executive director. The two met because their children went to school together. After getting to know one another in 2017, Degliantoni approached him about doing the first ever show at her gallery. Blount said yes, and now sees the show as the “impetus” to him regularly producing and sharing art.

“Ben’s work makes you pause,” Degliantoni said. “His work is so topical in such a gentle way, and Evanston is thirsty for that.”

Blount draws upon many sources of inspiration for his work, such as Evanston residents and topics discussed in the city. In October 2018, he did an art show at 1100 Florence called “Residency.” that focused on those who live in Evanston. Blount created a series of prints based on interviews he conducted with residents, asking them to describe Evanston in a few words. Blount used those words as copy for the posters, creating prints that say things like Evanston is “diverse but segregated” and is “in process.”

The show also featured photographs of past and present black residents of Evanston’s 5th Ward taken by Steven Adams, a local photographer and a Northwestern librarian. After interviewing the individuals about their experiences, Blount printed their words over their pictures.

“My work asks, ‘Is Evanston what we want it to be?’” said Blount. “That really resonates with people, and the city has been a fertile ground for what I’m doing.”

Melissa Blount, Blount’s wife, also creates art about similar themes as her husband. The couple has participated in shows together, and Blount’s “275 Holidays” piece inspired Melissa Blount to create the “Black Lives Matter Witness Quilt,” where each square on the quilt signifies a woman or girl who died due to interpersonal or police violence.

“We both want to make people who have been intentionally dehumanized be human through our work,” Melissa Blount said.

Lately, Ben Blount has been sharing his skills and prompting conversations about the themes represented in his art at universities and conferences nationwide. He also leads introductory workshops on letterpress and gives presentations.

Regardless of the setting, Blount always tries to explain why he chooses to focus on race and identity in his work.

“I want people to understand the inherent power in printing, in putting a message on paper,” Blount said. “That’s one way I look at the power of the press.”

Blount’s most recent project involves sharing his work with the public and interacting with people in Evanston through his new studio. He moved his workspace from his basement to a building located at 1123 Florence Ave. in 2019. Blount named the studio “MAKE” because he said “making and sharing” his art since moving to Evanston has been “transformative.” Blount hopes to “activate” the studio through events, community gatherings and workshops, in addition to traditional gallery shows.

Whether Blount’s art is shared at his studio, at 1100 Florence, or on his social media pages, Degliantoni said it’s clear that he is “so frickin’ talented,” both as an artist and a leader in the community.

“Evanston wants to have difficult conversations, but often, we just don’t know how,” Degliantoni said. “Ben’s work sparks very conducive conversations, and it’s an entry point for many people in this city.”