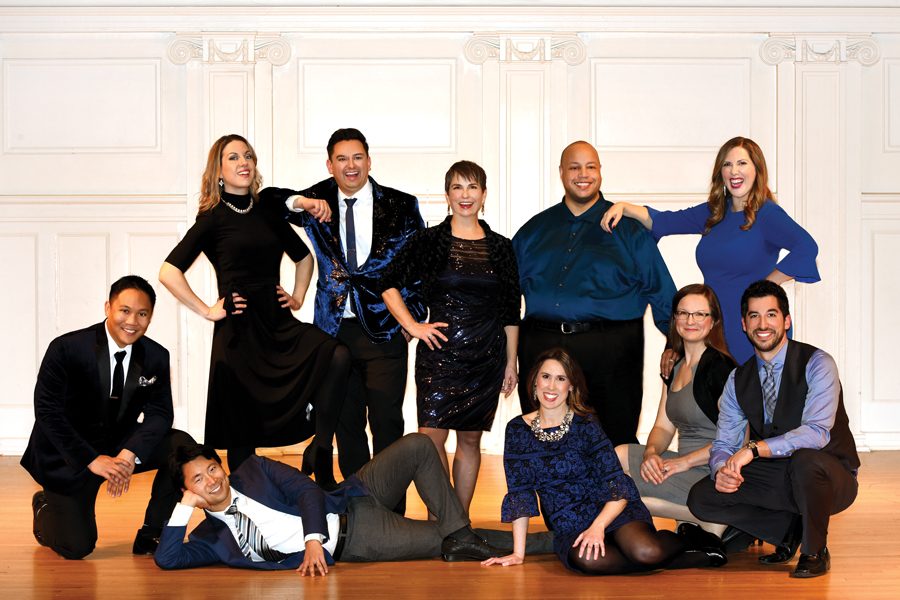 The ensemble of Chicago a capella. The vocal group will be performing “American Anthem” on Oct. 26 at Nichols Concert Hall.

As a music director for Chicago a capella, Patrick Sinozich (Bienen ’88) always hopes an audience leaves a show thinking that the group sounds great. But for his vocal ensemble’s latest concert series, he wants performances to deliver beyond sound quality alone — he also wants them to be “thought-provoking.”

The 10-person ensemble will give its third performance of “American Anthem: Songs that Challenge, Unite and Celebrate,” at Nichols Concert Hall at 3 p.m. on Oct. 26. The show is inspired by and named after an ongoing NPR series that explores music underscoring key moments in the nation’s history.

Sinozich describes an anthem as a song that “excites, inspires and educates.” According to Sinozich, “American Anthem” features a wide range of music throughout history, from traditional patriotic tunes to rallying songs from movements for civil, LGBTQ and women’s rights.

“The rehearsal process was kind of contained, and we weren’t really sure how people would react,” ensemble member Emily Price (Bienen ’02) said. “Once we put the music in front of an audience, different songs connected with different people. Feeling that energy from the audience has been really, really awesome.”

The concert includes short monologues by singers that provide historical context. Sinozich said these introductions can either support or challenge the next piece, giving the audience room for their own interpretation.

Ensemble member Chelsea Lyons (Bienen ’17) said that group’s program coordinator Kathryn Kamp came up with the concert concept and shared materials, including episodes from the NPR series, to help singers understand and prepare for the show.

Price said many songs featured were not specifically written to be anthems. For example, the spiritual “Lift Every Voice And Sing,” an anthem of the African American community, was originally written as a poem.

“That’s what I find so fascinating about going through all of these songs in one program covering such a vast amount of time – how a song someone might have written just from their heart can make people feel seen or inspire them to stand up for their rights,” Price said.

Lyons said for her, one of the most moving moments of the show is an all-female rendition of “Quiet,” a MILCK song that served as an anthem during the 2017 Women’s March on Washington.

Lyons added that after performing “Quiet” in Oak Park, five or six women in the audience rose from their seats, applauding. A woman in the front row, she said, was in tears.

“I could tell that our performance had meant so much to that audience,” Lyons said. “Everybody in that room (was) at some point probably affected by sexual assault, whether it was themselves or a loved one. The piece really resonated with them that day, and since then that’s kind of been the highlight of the program for me.”

Lyons said it’s disappointing that many of the “politically and socially motivated” songs in the show are still relevant today.

She said she hopes audiences take away the idea that the country has come a long way but needs to go even further.

“These anthems are part of our history, but they’re also a huge part of our future,” Lyons said. “They need to continue to be a part of us moving forward so that we can continue to make changes for the better in our society, culture, economy, politics, and ultimately who we are as Americans.”