Thuillier: Diversity at The Daily is important, down to the subject you study 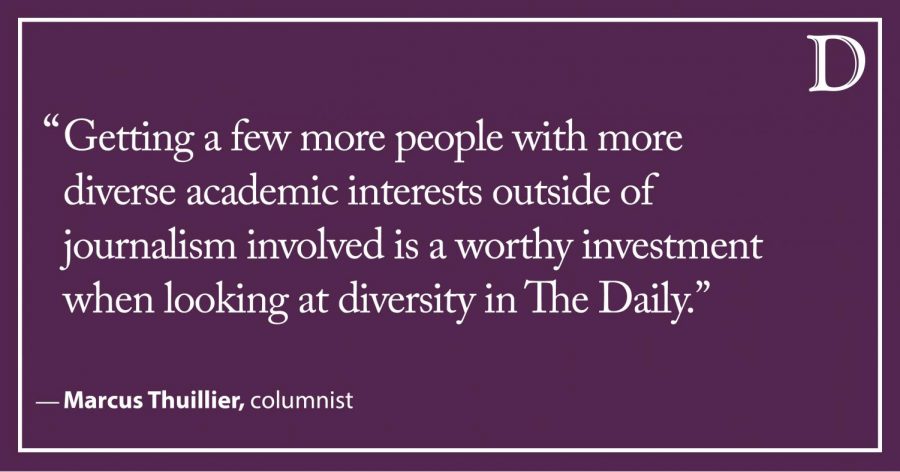 Last year, I participated in the second annual “The Daily Northwestern’s Diversity Report.” I’ll be the first to acknowledge that my socioeconomic and ethnic background do not contribute much to the goal of adding diversity in The Daily’s newsroom. However, it’s nice to see such a storied organization taking steps towards more diversity and inclusion in their newsroom. Still, it was another figure that caught my eye: According to the survey conducted, 83.1 percent of The Daily staff majored in journalism.

This number might seem completely normal. The Daily is a newspaper after all, and you’d expect journalism students to contribute and form the backbone of the organization. Yet the report itself points out the issue with such an assumption. The Daily Northwestern Editorial Board writes that “this imbalance narrows the perspective our staffers bring to each story or project, and makes our coverage less reflective of issues not directly affecting Medill students.”

I attended UC San Diego for my undergraduate education, and we did not have a journalism school or major. As a huge public research university, its publication’s newsroom more often looked like a computer science lab with people working on homework rather than a fully functioning newspaper. One big draw of such an environment was the varied perspectives and issues the many majors present in the staff brought to the table. Newspaper coverage reflected the student population as a whole, not just of one school. What we lacked in professionalism, as none of us were part of the classes and training that Medill students endure, we made up for with a broad convergence of different personalities and views.

Medill students are no doubt some of the brightest journalism students in the country and have shown to be fully able to carry The Daily’s legacy. But they also are around each other all the time. They take the same classes. They have the same tricks when it comes to passing those classes. They might come from different backgrounds and have different stories but in the end have very similar academic perspectives by way of their major. They might make excellent journalists in the long run, but the creators of The Daily largely all undergo the same education, affecting the diversity of thought and perspectives present in the papers they publish.

As a graduate student in a STEM field, my experience at Northwestern can be very different from a Medill student. Ultimately, while my academic background doesn’t really impact the issues I cover, it has shaped my views differently than if I had pursued a journalism major. I just so happen to voice my opinion on content often unrelated to my academic background, so it isn’t always evident.

There are more pressing issues when it comes to diversity in the newsroom. Race, gender, sexual orientation and socioeconomic background are bigger priorities when it comes to giving a voice to those who haven’t been heard. But it’s important to keep in mind this other group of people whose views don’t usually get portrayed in the media. Getting a few more people with more diverse academic interests outside of journalism involved is a worthy investment when looking at diversity in The Daily.