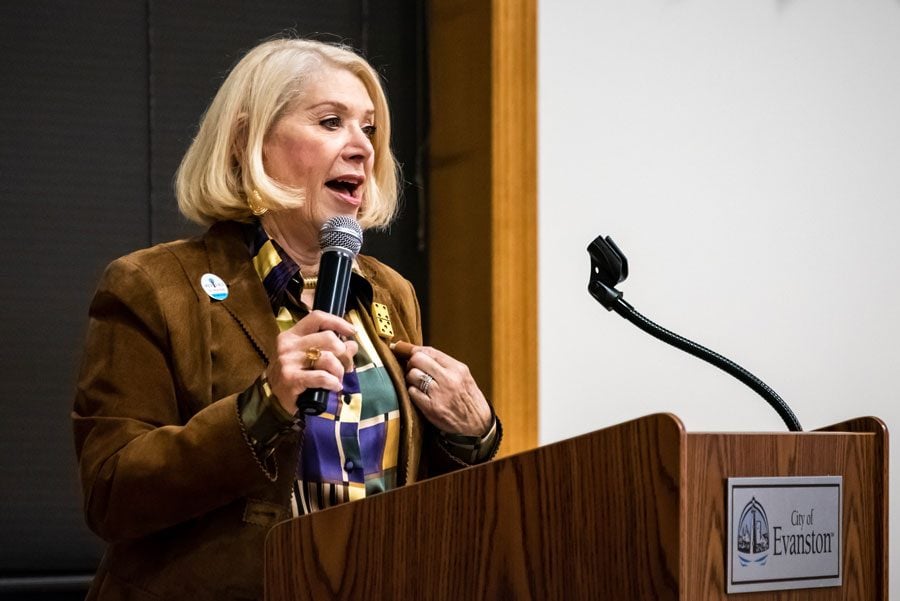 Ahead of the 2020 election, MSNBC contributor Jill Wine-Banks and the Evanston NAACP’s civic engagement chair Willie Shaw urged Evanston residents at a Tuesday event to get out the vote and stay engaged.

Invisible Evanston held the event at the Lorraine H. Morton Civic Center, aiming to inspire community members to become politically active. The speakers emphasized the importance of grassroots work and involvement in both local and national elections.

Before she was a contributor for MSNBC, Wine-Banks served as a prosecutor who worked on the investigation of President Richard Nixon in Watergate. Indivisible Evanston co-leader Kathleen Long said she was excited about the speakers’ messages, especially in light of the current impeachment inquiry.

“We couldn’t have gotten more relevant than the two speakers we had tonight,” Long said.

Shaw started out the event, saying that she got involved with the NAACP in fourth grade and has been a member since.

Shaw said her time as an activist has demonstrated the importance of connecting to community members who may feel like their voices are unheard in politics.

“Sometimes, when they can make the connection between what’s going on locally and what’s going on nationally, it impacts the greater voting initiatives we’re trying to get them to focus on, like local elections,” Shaw said. “When they begin to understand what it is that they need, they feel that you understand that and you want to be a person that will work to help them get those things.”

Wine-Banks’ work as both an MSNBC contributor and a prosecutor has shown her the importance of being an educated citizen, she said.

She added that in the current political climate, she encourages people to become active in their community, so they can create positive change.

“If we don’t do something, we’re not going to take responsibility,” Wine-Banks said. “Hopefully, you will be motivated to say, ‘Well, what can I do?’ And it means that there’s a grassroots effort and that you’ll be able to accomplish something. But I want to motivate you to remember that our democracy depends on it.”

Tate said she attributes the increase in participation to the proximity of the 2020 election, which is one year from Nov. 3. She said events like the one on Tuesday — which drew more than 150 attendees — are key to convincing community members to become politically active.

“We’re hoping that this will make attendees motivated to get involved,” Tate said. “It may seem far away, but we are building momentum. This is consistent with the programs that we’re putting together, and it’s exactly what we want to be talking about.”