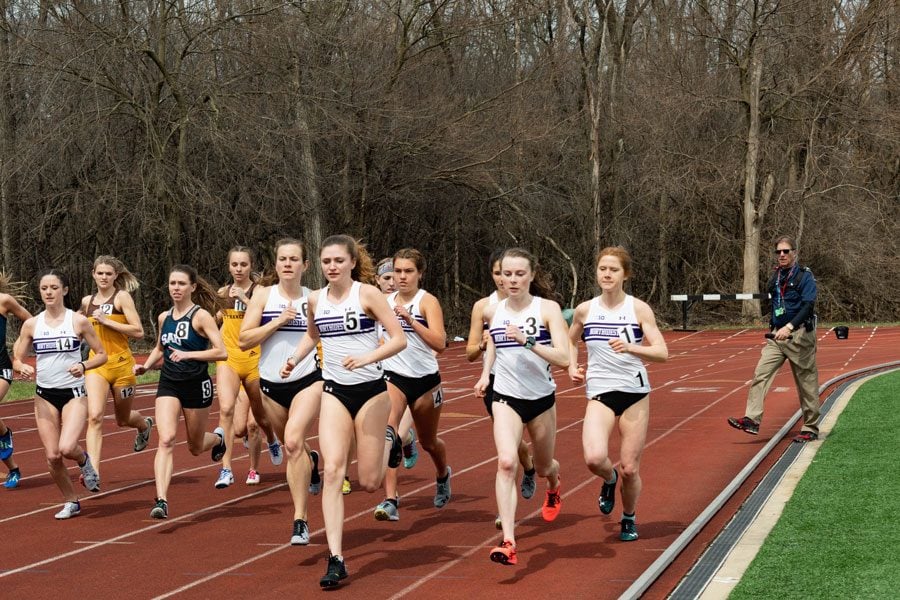 Northwestern runs in a pack. The Wildcats placed fifth out of 26 on Saturday.

After several bottom-half finishes early in the season, Northwestern finally found its footing at the NCAA Pre-Nationals in Terre Haute, Indiana on Saturday.

The Wildcats finished fifth out of 26 teams in the “White Race” — the slower of the meet’s two heats. Sophomore Rachel McCardell and seniors Kelly O’Brien and Sarah Nicholson led the way for NU with top-30 finishes. McCardell took 14th place with a time of 21:24.3, and O’Brien and Nicholson clocked in at 21:47.4 and 21:53.0, respectively.

The result was a drastic improvement over the Cats’ showings in September, and coach Jill Miller said the difference in the team’s composure was “night and day.”

“I was really pleased with their ability to go to the line really calm with a great sense of clarity as the race started and (get) out in really good position,” Miller said. “Tactically we were sound, but we were able to simplify and really engage in the middle and push through the pain to progress really well this weekend.”

For this meet, NU’s strategy involved runners pairing up and pacing off each other through the early stages of the race. McCardell said the plan worked well.

“Everyone stayed with their packs until 2 or 3K — people started breaking off from there,” McCardell said. “It really helped us all to get through the first half of the race because we were able to rely on our teammates through that part. It’s a lot easier to gear up for that 3K rather than the whole thing by yourself.”

The strategy also elevated O’Brien to a breakout performance as the Cats’ second runner to cross the finish line in 26th place.

“It was all mental for me,” O’Brien said. “I didn’t allow myself to get too far ahead in the race or focus on the outcome…That’s something I can replicate and take with me. It was a very nice page-turning moment for me in my longer career too, not just the season.”

While Miller saw the meet as a step in the right direction, she added that there’s still room for improvement. For instance, the gap between the top trio and the team’s fourth and fifth runners was almost a minute long, and she said closing that gap will help NU “take a big step forward.”

But most of all, Miller wants the Cats to keep their competitive mentality.

“It’s a huge improvement from where we were three weeks ago,” Miller said. “I certainly want to illuminate that, but also be very real that we want to be better and to keep focused on the process…My goal is that this is one step forward of many and that they continue to stay true to what we’re doing both inside and outside of practice.”