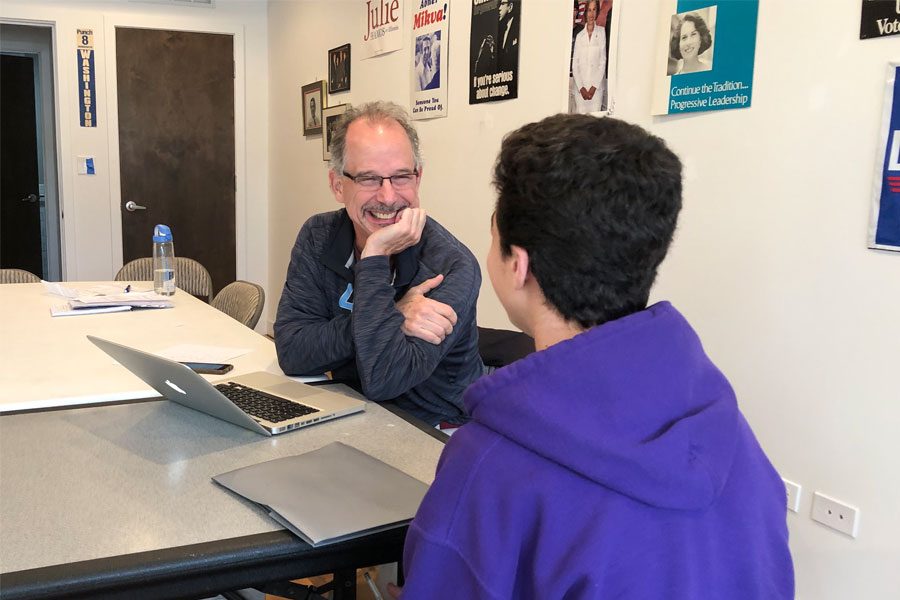 DPOE Climate Action Team Chairman Bob Heuer. Heuer speaks with an Evanston resident about what the group can do to publicize the issue of climate change.

The Democratic Party of Evanston’s Climate Action Team pushed for climate change education at its meeting on Sunday.

The Climate Action Team formed in early 2017, after the inauguration of President Donald Trump, as a part of the DPOE’s attempt to create different local organizing groups to tackle national issues. The team most recently worked with students at Evanston Township High School for the climate strike on Sept. 20. The committee is dedicated to providing climate-related resources and information for local activists to spread the word about the issue of climate change.

For group members like Chicago Waldorf School science teacher Jim Kotz, the inclusion of climate issues in the classroom is essential to students’ education.

“As a scientist, I definitely became aware of climate change. But I really enjoyed bringing the issue to my students,” Kotz said. “They’ve been very responsive, they’re very interested. So when there is positive feedback, I try to educate the students, and they show their appreciation.”

The City-School Liaison Committee, a group of aldermen and school board members, focuses on building relationships between the City Council, Evanston/Skokie School District 65 and Evanston Township High School District 202, and to allow community members to address concerns that affect both the city and the school districts. At the committee’s next meeting, the Climate Action Team will discuss how the city and school districts can work toward educating the public about climate change and positively impact the community.

The group decided to push for the inclusion of climate-related topics in education at all grade levels, said committee chair Bob Heuer. The inspiration for this push stemmed from a discussion about a project that sixth graders in District 65 undertook last year, where they investigated environmental issues, including invasive species and stormwater runoff, and presented possible solutions.

ETHS sophomore Ethan Schaefer said though many students don’t receive in-depth education about climate change in their classes, many are getting involved outside the classroom and speaking up about the issue.

Heuer estimated that approximately 300 people attended the climate strike, the majority of whom were students.

Schaefer attended the committee’s meeting and said some people’s hesitation to discuss climate change comes from how it is talked about on the national level.

“If you play the fear card — you talk about how the earth is heating up and the oceans are rising — you’re just going to scare people,” Schaefer said. “That’s not what needs to be talked about. There needs to be a focus on solutions. If people are scared, they won’t want to talk about it, and those things will actually happen.”

However, the organization wants to continue community involvement in climate change action, and according to DPOE director of communications Neal Weingarden, part of the plan to do so includes starting with smaller, more attainable goals.

“A lot of these things are big ideas, and they can take a long time, which is a good way to get people to lose interest,” Weingarden said. “Identifying small, digestive parts where we can get small wins is the best way to keep people involved.”