Field Hockey: No. 10 Northwestern demolishes Kent State in a 5-0 victory 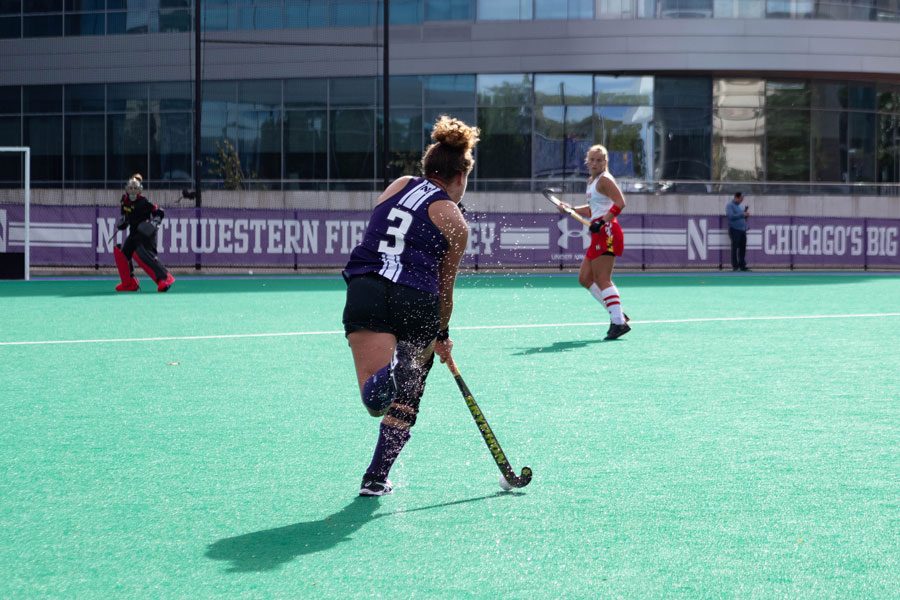 Bente Baekers runs with the ball. The sophomore recorded her third hat trick of the season on Sunday.

The No. 10 Wildcats demolished Kent State in a 5-0 victory that saw Bente Baekers score her third hat trick of the season, the defense hold the Golden Flashes to just one shot and the team earned plenty of momentum for a top-10 matchup with No. 6 Iowa next weekend.

NU (12-5, 4-2 Big Ten) was in control offensively the entire game, scoring its first goal just nine minutes into the contest with a tip in from freshman midfielder Alia Marshall, who scored her first career goal.

“Usually I play in the backfield, so to be in the deep end of our offensive circle, I was a little out of sorts,” Marshall said. “I knew to just hold the post and the ball came trickling through, so I just put it in.”

Marshall and the rest of the midfielders and defenders locked down Kent State (9-6, 4-0 MAC), as the only shot they allowed came late in the fourth quarter long after the game had been decided. The Cats controlled the pace, easily shutting down fast breaks and scoring opportunities.

NU was 2-for-5 on penalty corners with both goals coming from Baekers, one off a rebound and the other directly from the top of the circle. When the Cats execute their penalty opportunities, they play with more confidence. In its last contest against Rutgers, NU was 2-for-6 plus a penalty stroke score.

The Cats run a few different penalty corner plays which give the ball to either Baekers, junior forward Lakin Barry, or sophomore midfielder Maren Seidel. A play they ran twice on Sunday included two stick stopper set ups, which forces the already undermanned defense to make a quick decision as to which person they think will get the ball.

On Sunday, Kent State picked Baekers, giving Barry a window to fire the shot that led to Baekers’ first goal.

“We have two stick stoppers, two batteries, almost all the time, so they don’t know who it’s going to,” coach Tracey Fuchs said. “They have to decide as the ball is coming out, and we have three really good hitters, so it gives us a lot of options so that other teams, when they scout us, have no idea who it’s going to.”

Baekers topped the win off with a beautiful reverse hit in the fourth quarter. Her ability to create shots for herself with minimal space is one of her biggest strengths, Fuchs said. Baekers has scored 22 goals this season, and at least two goals in each of the last two games.

Baekers said Fuchs will remind the team in the huddle that the game is a team effort, and that individual scoring is a smaller part of the team message.

“If no one passed the ball to me, I can’t score,” Baekers said. “I’m glad my role is to reward everyone for the great setup we do, all the passes that I get, they’re all perfect — well, they’re not all perfect, but we make it work.”