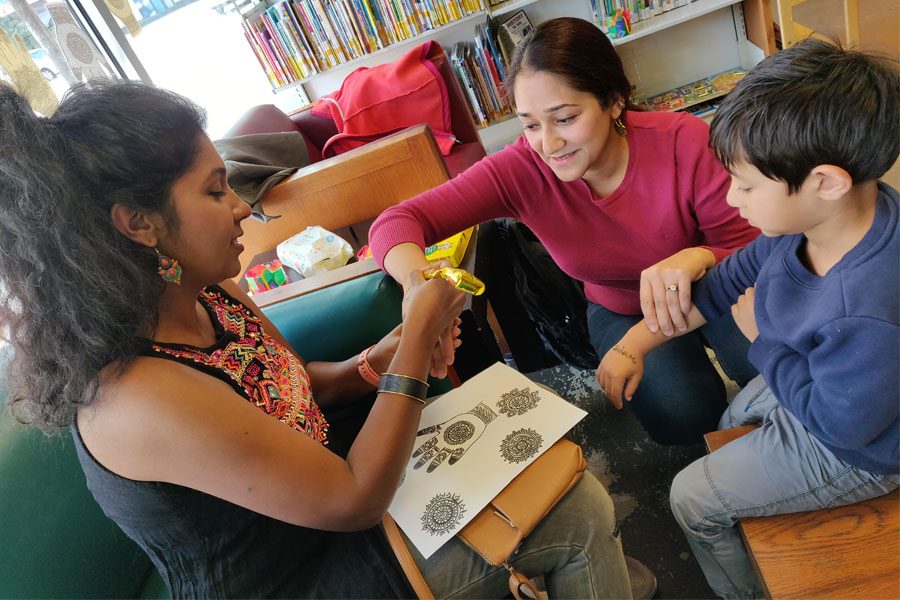 Henna artist Shruti Vijay (left) applies mehendi to Ankita Bhan and her son. The celebration was held Saturday at the CAMS branch of Evanston Public Library.

Standing before a crowd at the Chicago Avenue-Main Street branch of the Evanston Public Library, Martha Meyer, assistant in early learning and literacy services, retold the story of the Ramayana at a Diwali celebration. The epic had been condensed into a short, interactive story where audience members played the roles of characters from ancient Hindu myths.
A crowd of a dozen small children and parents attended the event from 11 a.m. to noon. Diwali, known as the festival of lights, is a four- to five-day-long festival celebrated by Hindu, Buddhist, Jain and Sikh communities. Typically, the festival involves lighting traditional oil lamps, called called diya, and worshipping Lakshmi, the goddess of fortune.
“It was long overdue,” Meyer said of the Saturday Diwali celebration.
At EPL, the Diwali celebration centered around a storytime based on the story of the Ramayana, the lore behind the festival of Diwali, arts and crafts activities and a free mehendi station with a volunteer henna artist. After the children listened to the story, they decorated diya and made their own versions of traditional rangoli designs on paper using colored sand.
To create the story, Meyer referred to children’s books that adapted the Ramayana, including works like “Prince of Fire.” She also worked with advisors to confirm the accuracy of her presentation and ensure that the day’s crafts were appropriate.
“I never do events like this unless I talk to the community,” Meyer said. “I have two members of the community that I talk to to make sure what I’m doing is not offensive.”
Wilmette resident Ankita Bhan said she enjoyed the reception. She drove to Evanston with her son to attend the event and took several videos of the storytime.
Bhan remarked that when she initially came to America from Delhi, she hadn’t anticipated staying. Back then, culture hadn’t been as important for her. Since having children, she said she started putting more importance on community and multiculturalism.
“At home, we just do a little puja and make some Indian food,” Bhan said. “This is a much better way of introducing kids to the culture.”
For Raquel Galan, an Evanston resident who is originally from Spain, celebrating Diwali became a part of her life when she met her Indian husband 10 years ago. Before settling in America, Galan had never celebrated festivals like Diwali or El Día De Los Muertos, which have now become much more important to her.
She came to the event with her husband and two daughters, who had donned traditional Indian lehengas for the event.
“Celebrating festivals enriches your life,” Galan said. “Life is a lot more fun now.“
The event attracted families with different ties to Indian culture. The audience cheered on Rama through his exile and war against the demon Rawana, ending in a victory cry as the prince returned to his kingdom, and the final lines of Meyer’s dramatic retelling rang true:
“Although we may call light something different than Rama, and dark something different than Rawana, we can all celebrate the victory of light over evil in India,” she said.