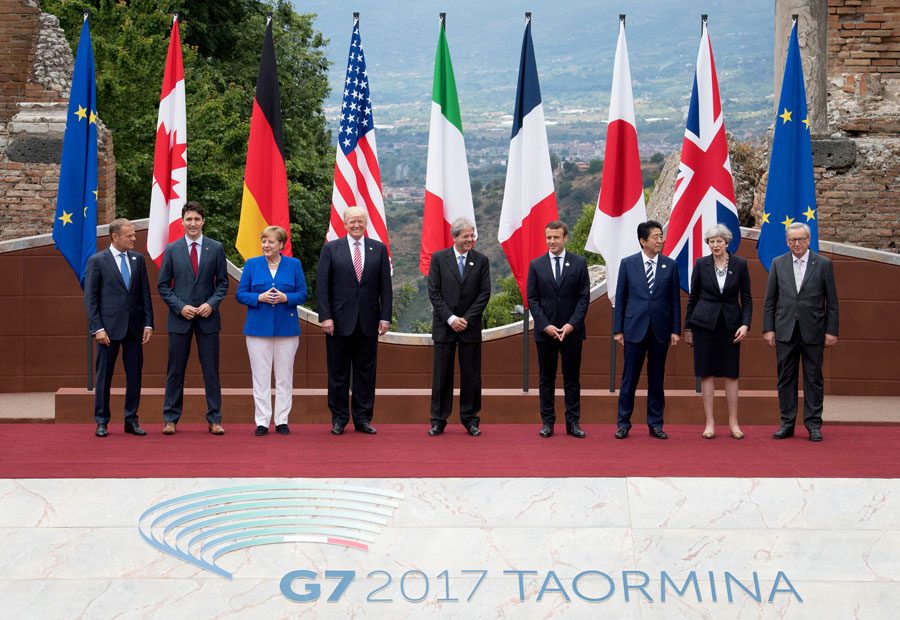 US President Donald Trump and Japanese Prime Minister Shinzo Abe pose for a photo with other world leaders at the 2017 G7 summit at Teatro Greco in Taormina, Sicily, Italy. On Friday, Northwestern professors discussed Japan’s economic prospects as part of their fall lecture series.

A group of Japanese scholars and professionals discussed the role of Japan in the global economy at a Friday event, saying that despite demographic challenges, the island nation has room for growth.

About 40 people attended the event, held at Hardin Hall in the Rebecca Crown Center. Hosted by the Japanese government, the event is part of the “Walk in U.S., Talk on Japan” lecture series, which aims to improve U.S.-Japan relations at the grassroots level.

Tomohiko Taniguchi, a professor at Keio University in Japan and one of the event’s panelists, told The Daily it’s important for Americans to move beyond perceptions of Japan as just a place of “Pokemon and anime.”

“Those are important elements of Japanese soft power, but there are lots of other things going on,” Taniguchi told The Daily. “What about the elderly population? What about environmental concerns?”

The series is funded by Japanese taxpayers and managed by Prime Minister Shinzo Abe’s cabinet.

During the panel presentation, Taniguchi discussed several of Japan’s biggest hurdles to economic growth, including its declining and aging population.

He stressed the fact that there’s “no silver bullet” for increasing productivity in the country. Solutions, he said, must include integrating more women into the workforce and opening the door to people from abroad.

“We must engage people from outside of the traditional box,” said Taniguchi, who’s also a special adviser to Abe’s cabinet. He noted that Japan has increased the number of work visas it grants to foreign workers each year.

Despite the challenges, however, Taniguchi said there are bright spots in the Japanese economy. Japan still boasts levels of numerical proficiency higher than the Organisation for Economic Co-operation and Development average, and the unemployment rate among college-educated and non-college-educated people remains lower than in other developed countries.

Akira Sakano, chair of Zero Waste Academy — an environmental nonprofit in Kamikatsu, a small town on Japan’s Shikoku island — encouraged people to not only recycle, but to also rethink how consumption plays into their daily lives.

“Right now we are in a linear economy,” where goods are purchased, used by a single person, and then discarded, Sakano said. “The ideal is a circular economy, where we keep products within society and reuse them before recycling.”

She cited several successes in Kamikatsu that could be replicated elsewhere, including a “circular curio shop,” where assorted goods are stored and free for residents to take, and an upcycling center where fabric from old kimonos is converted into other articles of clothing.

Besides alleviating the stresses put on the earth from mass consumption and unnecessary waste, living a zero-waste lifestyle can be good for local economies, Sakano said, because municipal waste costs are lowered.

Sakano, who spoke about the Zero Waste Academy at this year’s World Economic Forum in Davos, Switzerland, stressed the importance of striving towards a zero-waste lifestyle even if it’s not attainable from the offset.

“It’s a long process, but it’s more important to be ambitious,” Sakano said. “If you say just want to cut waste in half, that’s realistic, but it doesn’t give you the out-of-the-box thinking to go beyond.”

Max Sigal, a Weinberg senior who attended the event, said he came because he was interested in environmental issues and because he had taken Japanese classes at Northwestern.

“The biggest takeaway is that even if you can’t get to full reduction of waste, it’s really the mindset that you need to instill in people more so than policy that will help you get to that goal,” Sigal said.

But having students and faculty meet with Japanese people one on one, she said, remains vital.

“It’s a great opportunity to not just study a country and its people from here in Evanston, but to interact with them too,” Rapp said. “To have that conversation.”