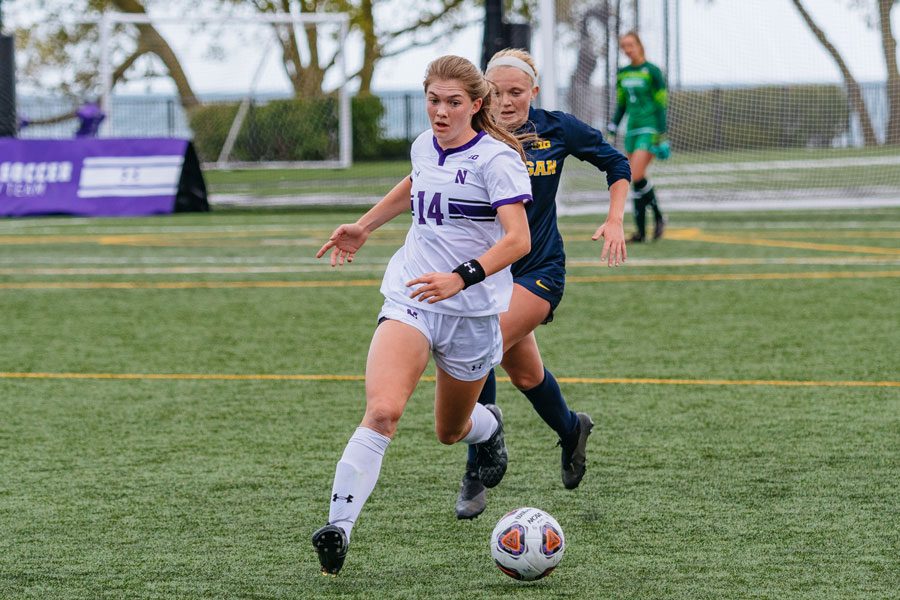 Marianna Annest dribbles the ball. The freshman defender scored the lone goal for Northwestern on Thursday.

For the third time this season, Northwestern couldn’t pull out the win when tied in double overtime.

In their Aug. 29 tie against Central Michigan, NU had 15 shots, and in their draw against Purdue earlier this season, the Cats only took five. In Columbus, Ohio, on Thursday, NU notched 21 shots — the most of any game this season — and seven of them were on goal.

The Buckeyes struck first, with midfielder Maddy Lowe picking up her first college goal in the 31st minute. Midfielder Olivia Petit drove the ball down the center of the pitch before passing it to Lowe on the left side of the box with an open lane to the goal. Sophomore goalkeeper Mackenzie Wood came out of the net to block the shot, but Lowe nicked it past her and sophomore center back Julietta Thron.

“(Lowe) got behind our entire line, and the only thing that I could do was sprint to the goal and see if I could save it,” Thron said. “There was no way I was really going to be able to get it.”

The Cats came to life in the second half with seven shots — just three fewer than their number of shots against Michigan and Michigan State all last weekend.

The Colorado native had the ball in the middle of the field and took the shot with her left foot from just outside the box.

“She’s got a great shot,” coach Michael Moynihan said. “She’s a natural lefty, so it was something that was designed for her, and she executed it very well.”

NU had a collection of good chances to take the lead in overtime, highlighted by freshman midfielder Lily Gilbertson’s shot to the bottom left that nearly passed Silkowitz.

However, even with a second overtime and most of the possession near the Buckeyes’ net, the Cats still finished the game without another goal.

NU will travel to University Park, Penn., on Sunday to face Penn State, who currently sits in third in the Big Ten standings, four spots above the Cats.

Thron said the Cats need to come out playing well from the first whistle and not wait until 10 minutes into the game.

“Penn State’s an extremely talented team,” Thron said. “It’s going to be one of those things where we need to come out with a fire and a desire to win. Everything needs to be 100 percent.”