Men’s Soccer: Why the Wildcats need Bardia Kimiavi now more than ever 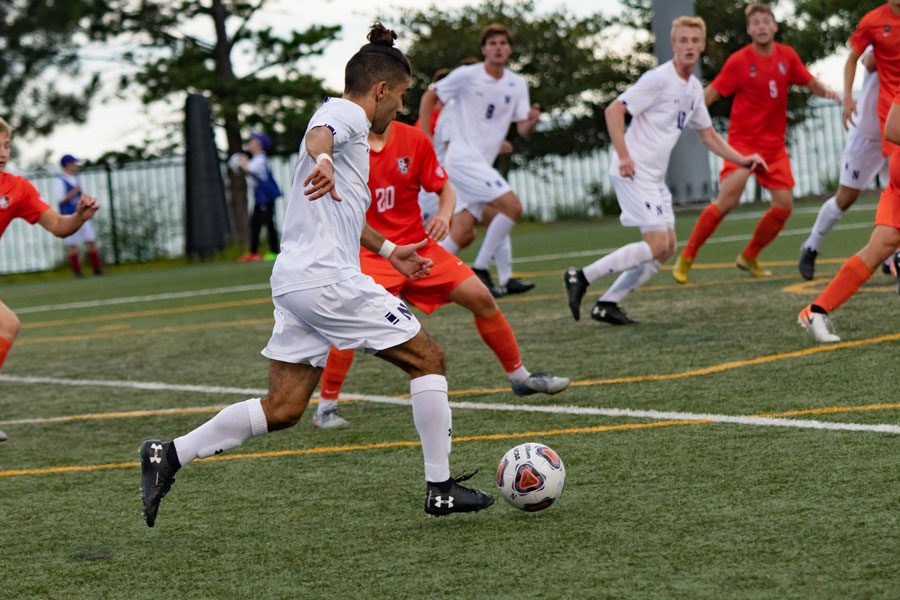 Attacker Bardia Kimiavi dribbles the ball. The sophomore has provided strong offense for Northwestern throughout the season.

Speed had never been an issue for sophomore forward Bardia Kimiavi. He’s so quick that Northwestern defenders frequently kick the ball all the way down the field, hoping he’ll chase it down and create a chance by himself.

So when Kimiavi had a lower body injury that forced him to miss two conference games, both he and the Wildcats’ offense weren’t themselves. Kimiavi couldn’t cut and run the way he usually can, and NU couldn’t make up for his consistent presence in the attacking third.

“He had a little pop in his step,” Lenahan said. “That’s what we were watching, to see how he moved. And I think he moved pretty well.”

In the two Big Ten games Kimiavi missed, NU score just two goals against Michigan and Penn State. The Cats were outshot 43-12 in those games, dropping them to second to last in the Big Ten standings.

Kimiavi returned in Monday’s 6-0 exhibition win against Aurora. In his first game back, he scored an athletic goal –– cutting back to his left with the ball and taking a contested shot that went in the net.

Lenahan said the purpose of Monday’s game was to get players on the field who were struggling with injuries or haven’t been able to crack the rotation against in-conference competition. Kimiavi played extended minutes for the first time in two weeks, and he said he felt emotional getting back on the field.

“I didn’t think it would take this long to get back, and it was pretty frustrating to watch from the sidelines,” Kimiavi said. “Especially considering it was a week where we had three pretty big games. Hopefully, after this, I’ll be good to go.”

NU will need him Sunday and for the rest of the season to accomplish their goal of hosting the first round of the Big Ten Tournament as a top-four seed. The Scarlet Knights currently sit in seventh place, and with a win, the Cats would jump from eighth to fourth.

“It’s pretty much make-or-break at this point,” Kimiavi said. “If we want to have the season that we know this team has the potential of having, we’ve really got to put it all out there these last three games.”