‘I’ve got class even though I don’t but I do:’ What playing on a Friday means for Northwestern 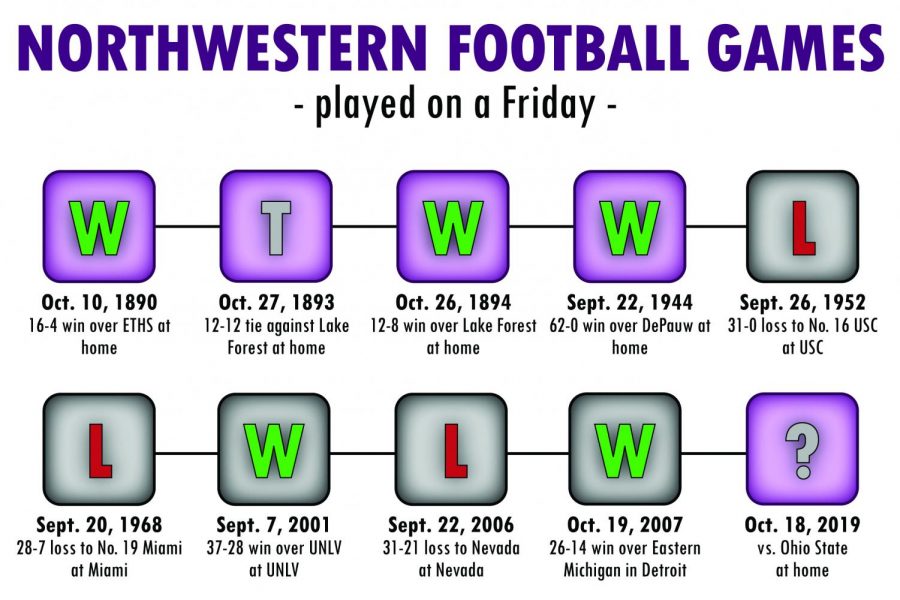 In a famous tune by the band Chicago, the lead singer is approached by multiple people on the street and asked what time it is. His response, which is also the name of the song, propelled it to the top of the charts.

“Does anybody really know what time it is?”

If someone walked up to junior wide receiver Riley Lees this week and asked him what day it is, the questioner might get a similar answer.

With Northwestern playing its first Friday regular season game since 2007 — and first ever conference game on a Friday — the Wildcats have rearranged their schedule and mindset to be ready to play a day earlier than usual.

The Big Ten’s decision to schedule conference games on Friday has been poorly received throughout the conference. When the decision to make this game a Friday night contest was announced, Fitzgerald told The Chicago Tribune that the choice “does not make me happy.” Northwestern’s athletic department has emphasized for weeks that it had no role in the scheduling of this game.

One of the reasons Fitzgerald gave for his disappointment with the schedule was that Fridays are meant for high school football. A Friday night game means Fitzgerald and his staff cannot scout high school contests, and most high school players cannot visit the campus for the game. Ohio State coach Ryan Day responded to a question about negative reactions from high school coaches to the Friday game.

“I hadn’t really got much feedback from the guys on that,” Day said. “Just one-on-one in my conversations with high school coaches, I’m sure they don’t appreciate it, but that’s out of our hands, out of our control and not much we can do about it.”

NU has played about 10 non-bowl games on a Friday, including nonconference away matchups against No. 16 USC in 1952 and No. 19 Miami in 1968. But the team has hosted only two Friday games since 1894 when touchdowns were worth four points and the Cats were coached by a University of Chicago student who also played for the Maroons that season.

During Fitzgerald’s first season as head coach, Northwestern traveled to Reno, Nev., to play a Friday night nonconference game against Nevada. Fitzgerald said his son Ryan was born on the Monday or Tuesday before the game, and he doesn’t remember anything else about that week.

The following year, NU traveled to Ford Field in Detroit to play a Friday game against Eastern Michigan. He recalls the 2007 game against the Eagles as “brutal” — even though the Cats won 26-14 — because there were “like 12 people” in attendance.

“I’m not gonna use anything (we) did those weeks,” Fitzgerald said. “I’m not having any kids this week.”