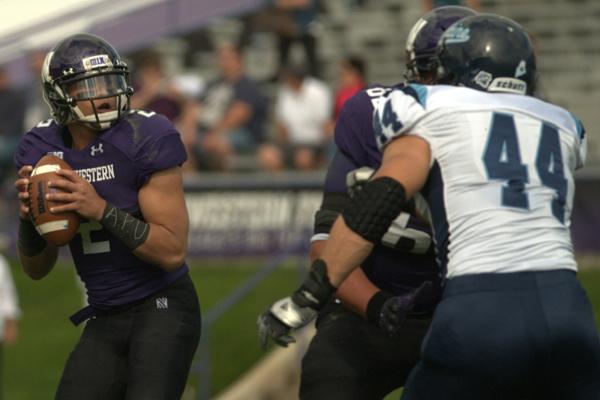 Kain Colter drops back to pass. The former NU quarterback spoke with The Daily about his favorite NU moments, the famous ‘College GameDay’ game and his unionization efforts during his time at NU.

Kain Colter served as Northwestern’s quarterback from 2010-2013, but he’s most well-known for spearheading the unionization push for NU’s football team in early 2014. Over five years after Colter made national headlines at NU, he spoke with The Daily about the fallout, his playing career and SB 206, the landmark California bill passed last month.

The Daily: As Northwestern prepares to host Ohio State for the first time since the 2013 ‘College GameDay’ game, the question still remains: Do you think you got that first down?

Kain Colter: Ohhh, yeah. I felt that at the time, for sure. I don’t know what the TV coverage showed — I know there was like a fumbled snap, and my knee hit the ground before I picked the ball up. I felt like I’d crossed the first down mark, but who knows. The chain gang knows. The chain gang says no, so that’s what it comes down to.

The Daily: When you look back at all of your NU career, what stands out as the best moment?

Colter: Winning the Gator Bowl was a highlight for sure. I just look back at a lot of our upset victories. A lot of time going into the game we are the underdog. I guess if I had to pick out a certain moment, it’d be the Gator Bowl victory because we went so long as a football program without winning one.

The Daily: California recently passed SB 206, which gives college athletes the ability to profit off their image and likeness. Do you feel like the stuff you worked on in college contributed to bills like these finally being passed?

Colter: Absolutely. It was something that we addressed in our platform as well. Our effort was
(about) the right to free association and some sort of democratic participation and these rules and regulations that we have to live by. But I think being able to have rights to your name, image and likeness is a huge component of that.

The Daily: Looking back to the unionization push in 2014, how do you feel about it now?

Colter: I think a lot of the criticism we faced was that this is just at Northwestern, it’s one private school within a sports league that’s composed of mostly public institutions and therefore if we were able to negotiate or collectively bargain just so that one institution within the Big Ten — within the NCAA — that it wouldn’t bring, I forget what the judge said, it wouldn’t bring stability in the labor relations or something like that.

And I think a lot of it was portrayed in the media as ‘Kain’s just attacking the school,’ rather than the players are actually trying to get meaningful participation in the decision making process of all these things that are gonna be affecting their lives.

The Daily: How do you feel about the way you were portrayed through all that?

Colter: I don’t know. In some ways, it followed the typical union-bashing campaign, carried out. Third partying the union, that was a lot of the rhetoric, just talking about how this is one disgruntled employee that had the issue instead of 98 percent of the team signing cards. They did do a good job of controlling the narrative and going along the lines of a regular union bashing campaign, but that only came after we won the regional decision.

I don’t know, it was also difficult because I just wasn’t with the guys on the team as that whole process was playing out as much as I wanted to be. I wasn’t able to communicate with them the way I’d like, and talk about some of these anti-union arguments that they were receiving — and that their parents were receiving. It would have been nice to actually be on campus at the time and try to combat the propaganda that they were receiving on the other end.

The Daily: What’s your relationship like with NU now?

Colter: I’m definitely rooting for them. I love Northwestern and my time there. It was a very formative time in my life.

But I think the decisions that we made to try and get the collective bargaining unit, I think that definitely severed some relationships there. I don’t know, I guess to answer your question, they’re pretty much nonexistent.

The Daily: Do you ever talk to Pat Fitzgerald or Jim Phillips?

The Daily: Looking back would you do anything different with the NLRB case?

Colter: We probably should have made a joint employer case, that we’re not just employees of Northwestern but also saying that we’re joint employees of not only Northwestern but of the Big Ten conference and the NCAA. And that way, I think the bargaining unit would have been greatly expanded and the judges argument that this wouldn’t have brought stability to labor relations would’ve went away.

The Daily: Anything else you want to add?

Colter: I hope my love for Northwestern comes across. Hopefully it’s criticizing intercollegiate sports and not the people.