Field Hockey: No. 10 Northwestern prepares for the final stretch, starting with Kent State 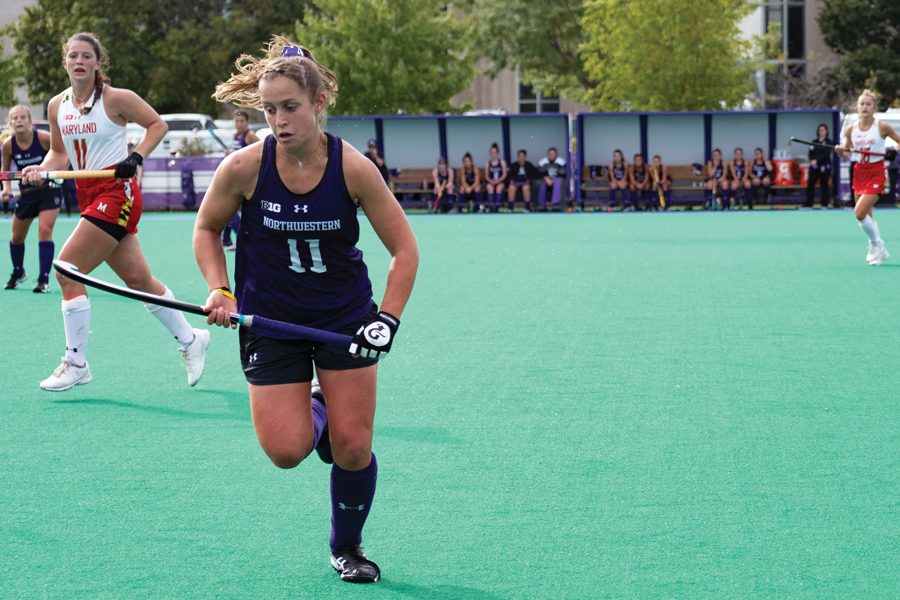 Kayla Blas runs towards the ball. The sophomore defender has started every game this season for the Cats.

Last Sunday, No. 10 Northwestern rebounded after three consecutive losses with a big 4-1 win over No. 18 Rutgers. This Sunday, the Wildcats have another big game ahead in a matchup with Kent State, who is currently No. 1 in the MAC standings.

“Kent State always comes out pretty hard, pretty strong. We play a little bit similar to them, but we have to go in prepared for how much energy they always bring,” junior defenseman Christen Conley said. “They have a similar structure and some pretty key players, so going up against them, we have to come out strong.”

In order to beat Kent State, the Cats will need to repeat their lockdown defense from their win against the Scarlet Knights. Coach Tracey Fuchs believes the back line is the unit that has grown the most from the beginning of the season, and Sunday’s performance was a great sign going forward.

NU has been playing a new defensive system this year, and sophomore defenseman Kayla Blas said the back line’s positive communication was key to their success during Sunday’s game.

For the first time all season, the Cats only have one game this weekend. Going forward, NU will only play one game per weekend and Fuchs said that will ensure the team does not underestimate any opponent down the stretch.

“This season our motto’s been ‘For the Fight’, and I think, especially with these one game weekends, it’s times that we can really fight for our teammates on the field, and we can really just practice and zone in,” sophomore defenseman Kayla Blas said. “We have three games with tough practice to prepare for them, and we know we have to fight every single time to get the best we can get done and nail down the home stretch.”

An NU win this Sunday would keep the team’s momentum going as it enters the final stretch of the regular season and the Big Ten Tournament. The Cats have three regular-season games left to prove their case, because they are currently on the outside looking in.

“We’re looking at every game as a playoff game. There’s only eight at large bids for NCAAs, so you have to perform really well at the end of the season to get in there,” Fuchs said. “We’re taking every game like it’s our last.”