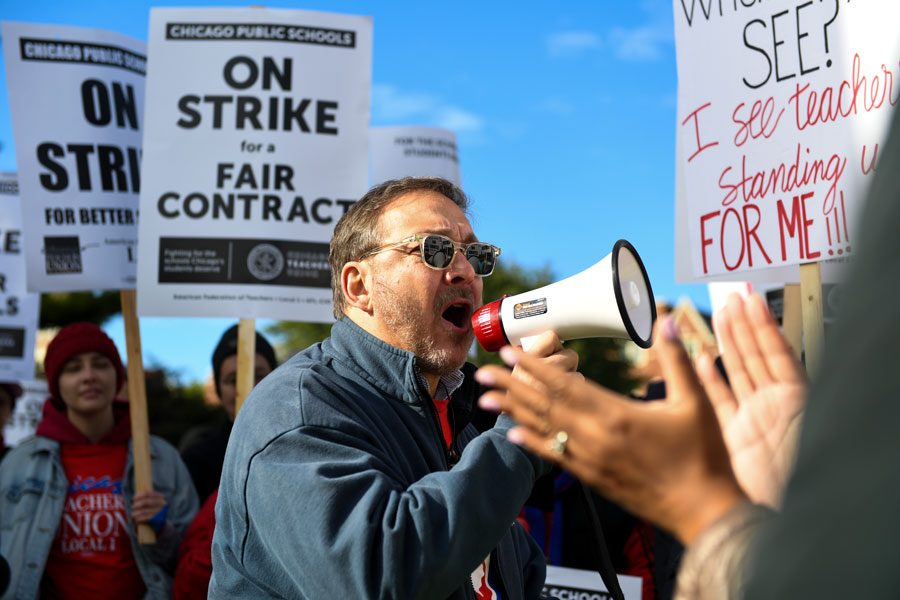 CHICAGO — Strikers donned in red marched up and down West Madison Street Thursday morning in front of Chicago Public Schools headquarters, as 25,000 members of the Chicago Teachers Union mounted picket lines across the city.

A breakdown in contract negotiations between the union and CPS affected an estimated 300,000 students in the nation’s third-largest school district. However, schools and public parks remain open for students who need a meal or place to go during the day.

Though Chicago Mayor Lori Lightfoot has offered a 16 percent pay increase over five years, the CTU has emphasized class sizes and additional staffing supports for students, such as social workers, librarians and school nurses.

SEIU Local 73, the union representing special education classroom assistants, janitors, bus drivers and other support staff also joined the picket lines on Thursday after their negotiations with the city fell through in July.

Dennis Kosuth from Rogers Park currently works as a nurse at three schools, though last year he worked at six. He expressed frustration toward Lightfoot, who included education reform as part of her campaign platform last spring.

“The mayor campaigned on our demands,” Kosuth said. “She said she wanted to put a nurse in every school, every day. I just wanted her to put her campaign promises into writing.”

Social workers, nurses, teachers and other CPS professionals joined the picket lines across Chicago on Thursday morning, marching from 6:30 a.m. to 10:30 a.m. Strikers wore red CTU paraphernalia and held signs and coffee cups while chanting. One man walking by shouted, “Take the deal,” while some continued to bang on their makeshift drums made out of buckets and duct-taped straps.

Erin Matthews, a social worker at Wells Community Academy High School and Brennemann Elementary School, said she is striking because she sees an unmet need for social workers on school campuses.

“There are communities experiencing trauma,” Matthews said. “They come to school carrying all that weight, and when there are no mental health services readily available in the community, the school is it.”

Matthews attended the strike with her 12-year-old daughter, Gabrielle Odom, who attends Blaine Elementary School. Matthews said her daughter’s school has Chromebooks, but some schools’ library doors are locked.

Odom said she has seen the difference between her school and the schools where her mother works, such as the lack of a full-time school nurse at other schools.

“When kids are sick they have to go to the office and call home, or they have to push through the day,” Odom said. “They don’t have a nurse to actually check up on them.”

The city and CTU came back to the table for negotiations during Thursday’s protests, but Lightfoot canceled school again Friday, as the strikes continue.

Correction: A previous version of this story misstated Gabrielle Odom’s name. Her name is Gabrielle, not Danielle. The Daily regrets the error.