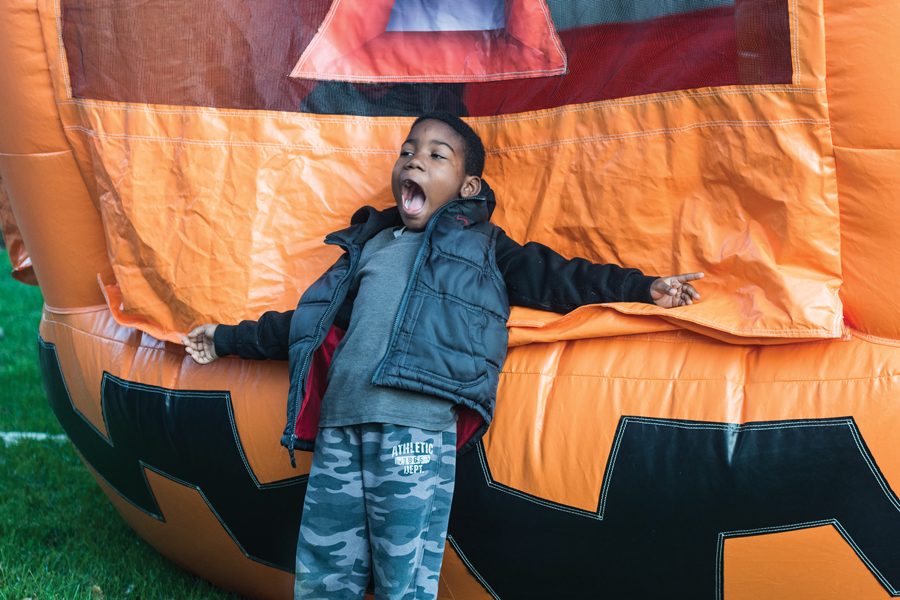 “The pumpkin is eating me!” said Destin, arms outstretched on a giant inflatable pumpkin. Fall Fest, put on at Gibbs-Morrison Cultural Center by Parks, Recreation and Community Services, featured a pumpkin moonwalk, costumes and face painting.

Destin laid back, arms outstretched on the giant inflatable pumpkin at this year’s Fall Fest at Evanston’s Gibbs-Morrison Cultural Center on Wednesday.

“The pumpkin is eating me!” the young boy said.

Fall Fest is both a celebration of the arrival of fall and, most importantly, a pre-Halloween spook-fest. Children from around the city decorated pumpkins, made buttons, got their faces painted and enjoyed pizza and candy.

“The favorite part for the kids was something that I had never seen before, where it’s make your own buttons,” said Evanston parent Bill Gray. “Favorite part for Dad? It will be the caramel apples.”

Maurice Wilkerson, the director of Gibbs-Morrison Cultural Center said events like these have been a success for the center.

The cultural center also puts on events for other holidays, Wilkerson said.

“Halloween, Christmas, those times people are celebrating, we do different programs and events,” Wilkerson said. “They all have been successful. This is doing something for the community to come out and just enjoy themselves with the family and the activities.”

Inside, the cultural center was adorned with colorful Halloween decorations along the walls and ceilings.

Outside, there was a “pumpkin moonwalk” — an enormous inflatable pumpkin-house that was new this year.

In the midst of the pizza, candy apples and painted pumpkins, Mariana Bojorquez, the Latino Engagement Librarian of the Evanston Public Library, was promoting reading.

Bojorquez said EPL wanted to bring books to the event for children who may not make it to the library.

“We don’t want the library card to be a barrier,” Bojorquez said. “We want to really bring down those barriers. So giving away these free books is one way that the library can do that.”

Bojorquez, like many other residents, noted how Fall Fest was a great example of a novel way to bring the community together. Behind the loud music, silly costumes, and impending “boos” of Halloween, community was being built in Evanston.

The event brought a diverse slice of the community together, Gray said.

“It’s nice that it brings all different sections of the community,” Gray said. “Sometimes you wouldn’t have a chance to interact with even some of your neighbors. And here everybody comes together. Good family fun.”