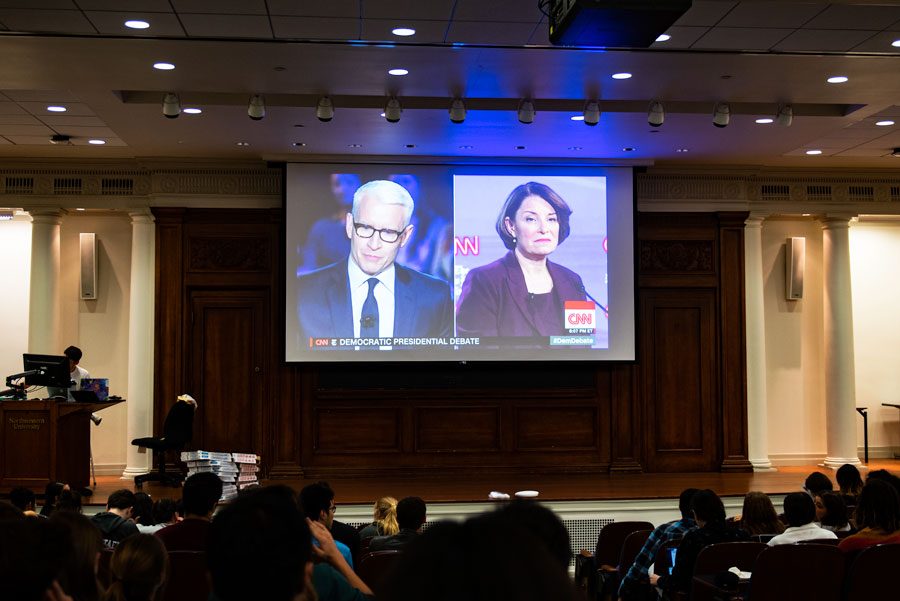 Students watch the Democratic Presidential Debate at Harris Hall. The presidential hopefuls debated topics such as the impeachment, the Middle East, health care, and gun control.

Tensions ran high Tuesday, as 12 presidential candidates took the stage at the fourth round of Democratic debates in Westerville, Ohio.

The New York Times editor Marc Lacey and CNN anchors Erin Burnett and Anderson Cooper moderated the debate and posed questions about topics including impeachment, the Middle East, health care, and gun control. Candidates did their best to distinguish themselves and often ended up attacking one another as a result.

Sen. Elizabeth Warren (D-Mass.), a front runner in several polls, received intense criticism throughout the debate. Mayor Pete Buttigieg directly attacked her for supporting Medicare for All, and Sen. Amy Klobuchar (D-Minn.) emphasized that Warren is not the only democratic candidate with bold policy ideas.

Communication senior Rachael Packard said she was impressed with how Warren conducted herself while under scrutiny.

“I always think Elizabeth Warren stands out,” Packard said. “She was getting s–t on a little bit tonight because she’s leading in a few of the polls, but I just really would love for a woman to be the nominee again. I think it would really send a message to run another woman against Trump.”

Packard worked on Gov. J.B. Pritzker’s gubernatorial campaign last year, so she said she understands first-hand how important debates can be. However, she noted that the structure of the Democratic debates can be challenging for viewers.

“I think the format of a 10- or 12-person debate is frustrating, just because, in a 30-second answer, no one is going to completely say what they want to say,” she said. “It’s also frustrating watching Democrats fight each other over such nitty gritty details. It’s really important for them to distinguish themselves at this point, but it is frustrating, as a Democrat, to hear them attack each other.”

SESP sophomore Madeline Baxter said she was particularly interested in what the candidates had to say about health care, especially as a global health minor. However, she said she only happened to catch a few minutes of the debate on Tuesday because her housemates had happened to turn it on.

She said she thinks it can be particularly challenging for students to take time away from their studies to watch the debates.

“Maybe it’s the difference between freshman and sophomore year, and me still feeling out of control in trying to ground myself in my academics and make the time for it, but I’m struggling to make time for things that should be important,” Baxter said. “School unfortunately trumps those things.”

Medill junior Alex Moore also said he was surprised by how difficult it was for students to watch the debates, though he set aside some time to watch highlights. He said he thinks of Northwestern as a politically engaged campus, but he noticed the libraries were still packed Tuesday night with students studying for midterms instead of tuning into the debate.

Regardless, Moore said that he is excited to see what’s in store for the next debate in November.

“Just having less people on stage is going to make a huge difference because it’s hard when there are 12 people on stage,” Moore said. “Having more time for the candidates to speak is something that I’m excited about, and just the fact that you never know what’s going to happen.”