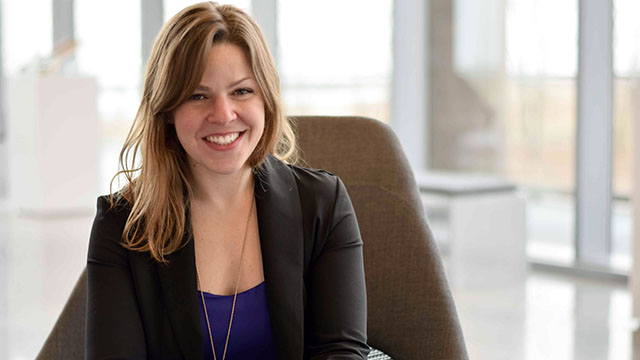 Liz Kinsley, the new director of undergraduate admissions, said she plans to continue increasing diversity in the class profile at Northwestern.

Still, Kinsley said she knew that working in admissions was always “in her DNA”.

“I love that the work we do in undergraduate admissions is equal parts intellectual, pedagogical and strategic,” she said in an email to The Daily. “For me, few other spaces in higher-ed so fundamentally weave together these modes of thought and practice.”

After receiving her doctoral degree at NU in 2015, Kinsley started working as the director of communications at the admissions office and was appointed as director of the department in July. Before that, she worked at UChicago Creative, the communications and editorial service of the University of Chicago.

Kinsley got her start in the admissions field at Yale University, her alma mater, where she worked for about five years. While at Yale, she helped to increase diversity among incoming students in her role leading Bulldog Days, an admitted student event that hosts up to 2000 participants per year.

Kinsley added she was planning to continue increasing diversity in the class profile at Northwestern.

“We’re always looking to bring in the most diverse class possible — a cohort of remarkable, brilliant students from across the world who represent all manner of perspectives, interests, talents, backgrounds and experiences, and who arrive on campus eager to learn from one another,” Kinsley said.

Margit Dahl, the director of undergraduate admissions at Yale, said it was Kinsley’s leadership of Bulldog Days — a similar program to Wildcat Days at Northwestern — and positive attitude that helped increase diversity in enrollment and contributed to the department.

“She’s just got ideas, she’s making some changes,” Dahl said, “she’s just very enthusiastic and positive about what she does.”

In addition to her role, Kinsley also taught a residential seminar as well as published her first book: “Here in This Island We Arrived: Shakespeare and Belonging in Immigrant New York.”

She said Kinsley was more than a teacher — she was a mentor and then later, a friend.

“She just gives her whole self to her students when she’s teaching,” Gilburne said. “It hurts me that she doesn’t teach more.”

At the time, Gilburne said she felt discouraged about her writing abilities. However, Kinsley invested a lot of time giving academic feedback and support to help her achieve her goal of becoming a better writer.

This personality, Gilburne said, is what makes her a perfect fit for her current role as admissions director.

Kinsley said she plans to expand upon current initiatives she developed as a former communications director. These include increasing connections between prospective and current students as well as fostering a bigger social media presence.

“When you ask a Wildcat why they chose to come here, so often the response you get is, ‘the people,’” Kinsley said. “So this is an important strategic lever in recruitment to be sure, but it’s also a substantive resource, because when prospective students arrive on campus having already made meaningful connections, they’re in a better position to thrive here.”