Margot Lee Shetterly speaks at One Book One Northwestern Keynote 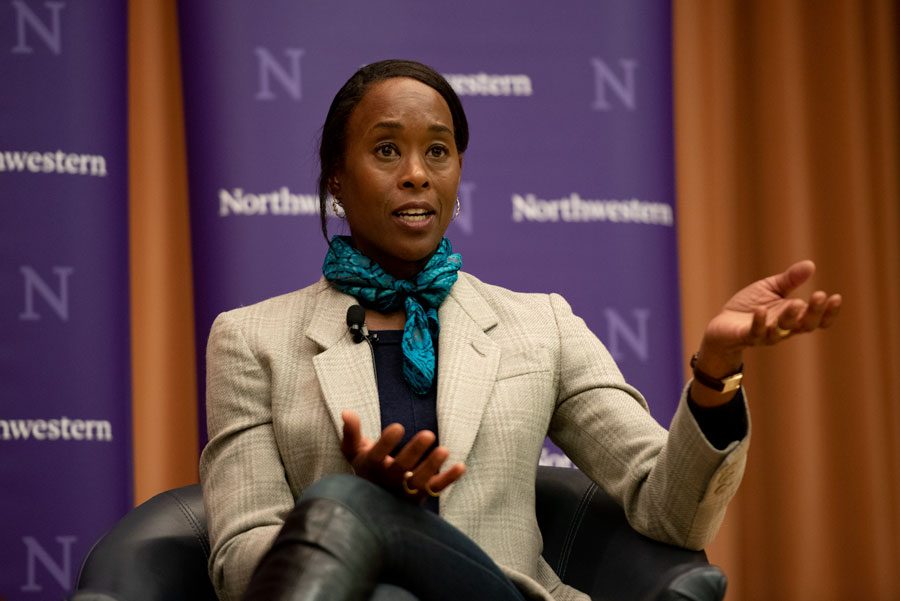 “Hidden Figures” author Margot Lee Shetterly speaks at One Book One Keynote. “Hidden Figures” focuses on the real-life stories of four black women who worked at NASA and made significant contributions to the organization during the space race.

Growing up in the city of Hampton, Virginia and surrounded by stories of black scientists, Margot Lee Shetterly never thought a black person being successful in STEM held particular significance.

Shetterly, author of the 2016 best-selling nonfiction book “Hidden Figures” which is this year’s selection for One Book One Northwestern, said she drew inspiration from her family and upbringing. The first scientist she knew was her father, who worked as a research assistant at the local Langley Research Center. Her hometown was full of black professionals who worked at NASA.

It was only when Shetterly’s husband said he had never heard about NASA’s black female employees that Shetterly realized people weren’t aware of the significant role black women played in the space race.

Shetterly spoke at the One Book One Northwestern keynote event Thursday in Ryan Family Auditorium.

“These women and their work and their stories and the history of NASA were something that was always in the background as I grew up, and that was something that I took for granted,” Shetterly said. “But when he asked that question, I had to admit, I didn’t know the whole story — I didn’t know why there were so many of those women. I didn’t know how they got there, and I was like ‘well, I want to know,’ and I should know.”

“Hidden Figures” unearths the stories of black women who worked as “human computers” at NASA during the space race and the challenges they faced working during the intensely segregated era.

The novel won the Anisfield-Wolf Book Award for Nonfiction and was adapted into a 2017 film nominated for three Oscars, including Best Picture.

In her opening remarks at the keynote, The Graduate School Dean Teresa Woodruff said the One Book selection committee chose “Hidden Figures” to mark the milestone of 150 years of coeducation.

“Through the various websites and school-based programs that feature our intellectual sisters and grandmothers comes a recognition of the heels and shoulders upon which the institution was built,” Woodruff said.

During the event, Weinberg Prof. Heather Pinkett facilitated a discussion with Shetterly about her book. Shetterly said she had to become familiar with the women’s research, then write and explain it in a way that was accessible to a wider audience. Shetterly said she also researched the work of civil rights activists who pushed to allow black women to work in civil service and incorporated that context into the novel.

One Book Fellow and Weinberg freshman Teresa Truong said she enjoyed “Hidden Figures” and admired Shetterly’s dedication to highlighting the significance of the black women. Truong said that the book struck a chord with her.

“I’m a woman in STEM, and although I might not be facing the same racism as them, there’s still some discrimination,” Truong said. “These women weren’t really acknowledged when they were alive, and that’s a little disappointing, but the fact that there were these women throughout our history — it’s good to know that they’re there.”

Shetterly told The Daily that the stories in “Hidden Figures” resonate today because women of color in STEM still face barriers and obstacles. Shetterly said she hears from women facing the same discrimination she chronicled in “Hidden Figures.”

In spite of this, Shetterly said working on the book and learning about the achievements the women made fills her with optimism about the possibility of progress.

“To look back at a time when there were many problems… and see how these people came together and applied their talents and applied their humanity and were able to move forward, that brings me a tremendous sense of optimism,” Shetterly said. “As challenging as it is, it has happened before, and it is possible.”