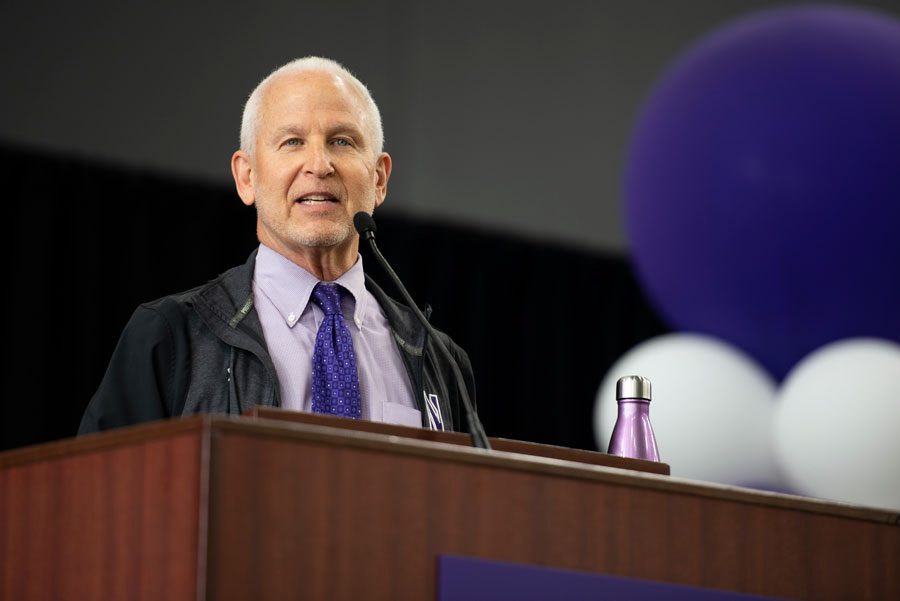 University President Morton Schapiro addresses the class of 2023 and transfers.

Commencement and other graduation ceremonies will move closer to the end of classes starting in the 2020-2021 academic year, University President Morton Schapiro told The Daily in a Wednesday interview.

After the University announced in June 2018 that calendar changes were on the horizon as early as this academic year, Schapiro said starting with next year’s graduating class, commencement and ceremonies will take place on the Sunday and Monday after finals week.

The calendar change closes the gap in end of year scheduling. Last year’s graduating class, for example, lined up in Ryan Field for Commencement on June 21, while classes ended two weeks prior.

With the shift, however, comes the elimination of Senior Week, a week after final exams that provided programming to graduating students such as an an alumni office-sponsored beer garden and a day trip to Six Flags.

Provost Jonathan Holloway told The Daily last year that, as of Summer 2018, the Northwestern Alumni Association was one of the only constituents opposed to the elimination of the week, but that the University would find other ways to create a bridge between alumni and graduates. In past years, graduating seniors had previously expressed concerns that the week’s paid programming — like the Six Flags trip — created barriers to participation for low-income students.

The new changes to the academic calendar began with recommendations from the Faculty Task Force on the Undergraduate Academic Experience in January 2016.

In the report, the group said that the current academic calendar “mandates a rapid pace” and “can detract from students’ ability to engage fully with each assessment.” One area of concern for the task force was the near-six month block of classes starting in January — with an only one-week reprieve during spring break.

Starting this academic year, spring quarter will start on a Tuesday so students have two full weekends during spring break.

Last fall, discussions also kicked off around creating a potential December session — nicknamed the D-Term — which would have students start classes earlier in September and finish exams before December. In administrators’ vision for term, students would have around a month to pursue classes, work, research or other programs.

But Schapiro told The Daily plans for a D-Term had stalled due to logistical challenges in scheduling.

“I’m not very hopeful for that,” Schapiro said. “There turned out to be so many impediments even though I really was hoping for it.”