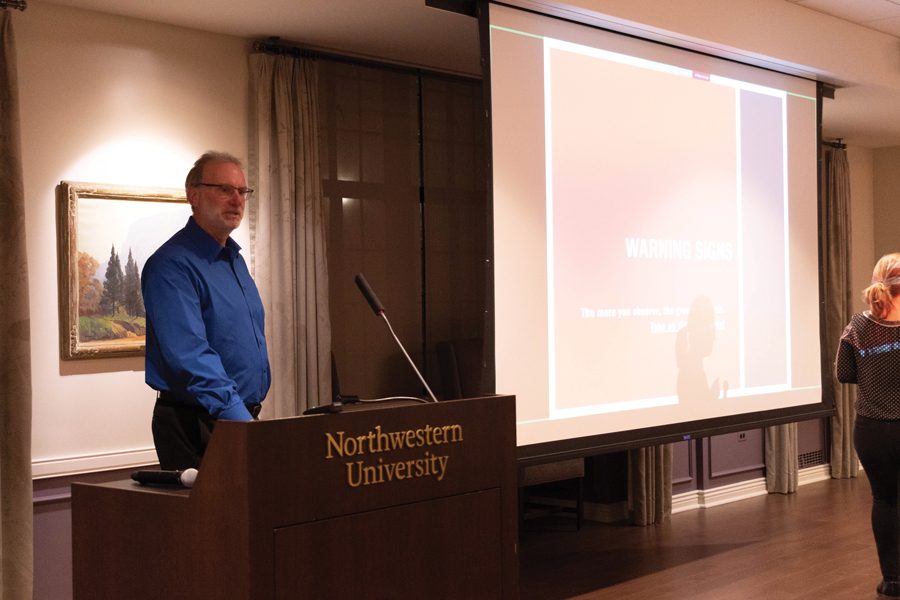 CAPS has seen a 50 percent increase in the utilization of its services over the past ten years, Shor told the Faculty Senate at their first meeting of the year. Last year, the primary mental health service on campus served about 3,200 different students, including over 1,000 urgent care appointments, he said.

Faculty Senate President Lois Hedman said that while she hopes as many faculty members as possible receive QPR training, she said the members present can at least return to their departments more informed.

“We thought this was one way for us to not only put a focus on this at the beginning of the academic year,” Hedman said. “But at the same time, also train many of us who are all from different departments.”

In the syllabus, Shor recommended professors encourage students who anticipate or have any history of mental health concerns to register with AccessibleNU.

Shor, who teaches Emotional Intelligence 101 with Joseph Holtgreive, assistant dean for Undergraduate Engineering, described mental health as a continuum. Wellness issues like stress and fear are similar to mild to moderate health concerns like muscle aches, irritability or sleep/appetite change. Those concerns could also be symptoms of severe mental health concerns like obsessive thinking or medical issues, which could relate to mental illnesses like PTSD, OCD, panic events or psychotic illness, Shor said.

For students whose performance may be poor because they do not feel engaged, Shor suggested inquiring about the student’s “activities of daily living” — wellness issues like sleep schedule, eating habits and proper hygiene.

For students who might be over engaged and stressed, he suggested professors lead the students in a three-second inhale, five-second exhale breathing exercise. Doing so, he said, would stimulate the vagus nerve, slowing down the amygdala — a set of neurons in the temporal lobe that help process emotions — and telling it “we’re not in a life and death situation.”

Shor said privacy is important, and professors should give students some space to talk. However, how the question is framed is less important than asking the question itself, he added.

Caring confrontation, with statements like “I noticed this” or “I’m talking to you because I really care” is where the conversation should begin, Shor said. Those indirect questions can then lead to more direct ones like “Have you been feeling unhappy?” or “have you been feeling so down you’ve been thinking about ending your life?”

Shor said professors should thank for their vulnerability and refer them to a variety of services, like CAPS, the dean of students office or campus ministry. For more emergency situations, a peer-operated helpline is open from 8 p.m. to 11 p.m. from Mondays through Thursdays, he added.

In the case of an emergency, Shor said someone should call the police.

Anthropology professor Micaela di Leonardo told Shor that as he spoke about the police as a form of emergency intervention, she thought of Atatiana Jefferson, a black woman who was shot and killed in her Fort Worth home last week by a white police officer after a neighbor called a non-emergency line to report an open door.

“There is a danger for students of color, again involving police, especially if you say that they are upset,” she said. “What do you all do about that?”

Shor said CAPS has conducted training with NUPD about mental health conditions and crisis situations. He said the police are only called when it is an absolute danger to the student to go to the hospital without an escort. When officers arrive, Shor said they are given full behavioral descriptions. Students are also asked if it would be helpful for a specific officer, like a woman or person of color, to be called, Shor said.

Shor said he would love for the admissions department to share information the quarter system might not be the best fit for students with severe anxiety disorder.

“No matter how intelligent you are, it’s not healthy,” he said.

Shor said by the end of the fall quarter, CAPS will publish an online database of local clinicians they have vetted and work with to help provide students with mental health care.