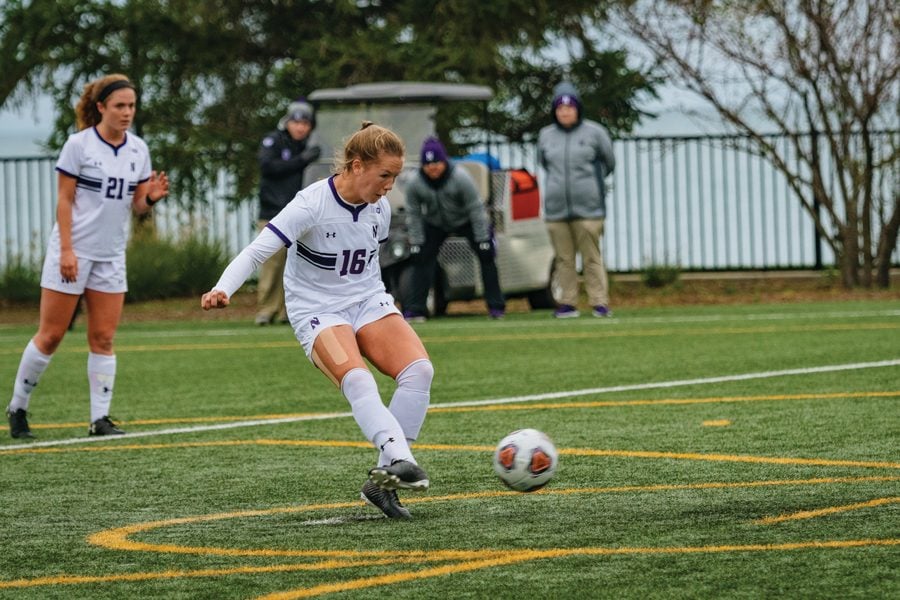 Mikayla Hampton dribbles the ball in front of the goal against Michigan Sunday.

No, Northwestern didn’t win against Michigan on Sunday.

But in this season of turnover and adversity, the Wildcats 2-1 defeat could qualify as a rare moral victory. Facing now the top-ranked team in the Big Ten, an offensive powerhouse, which has scored 28 times this season and poured 211 shots on goal, NU (5-7-2, 3-3-1 Big Ten) faced an uphill battle.

The result, a narrow overtime loss where the Cats put four shots on goal and scored once on a dramatic late-game equalizer by junior forward Mikayla Hampton, impressed coach Michael Moynihan with their offensive opportunities.

“I think our whole starting group came in and played really well,” Moynihan said. “It was a strong team effort. (Michigan) is a quality team. I don’t know that they had too many more dangerous chances than we did.”

NU showed resilience in the loss, scoring the equalizer just minutes after Michigan’s Nicki Hernandez’s goal gave the Wolverines the lead. In addition to the goal, the Cats used long balls to sustain an offensive press.

“I think we were a lot more dangerous,” Gilbertson said after Sunday’s game. “We had a lot more opportunities but obviously we didn’t finish on as many as we’d have liked to. But, I think it was big for us to finally start attacking with a lot more confidence and strength going forward.”

Sunday’s game was the second of the weekend for the Cats, who took down Michigan State on Friday behind goals from Gilbertson and graduate midfielder Olivia Korhonen. Sophomore goalkeeper Mackenzie Wood made six saves as NU came back from an early one goal deficit.

Gilbertson said the team’s performances have her feeling good about Big Ten Tournament qualification heading into the season’s final stretch.

“I think this shows us that we can play with some of the best teams in the Big Ten,” Gilbertson said. “Obviously we didn’t get the result we wanted [against Michigan]. I think we deserved a better result.”

Ohio State is the next challenge. The Buckeyes, who haven’t won since Oct. 3, when they took down Maryland 1-0, have gone goalless for the last two games, against Purdue and Indiana.

Despite its offensive inefficiencies, Ohio State has taken its fair share of shots, recording 204 throughout the season but they’ve only scored on 14. The Cats will need a big game from Wood to keep the floodgates from opening against them.

“We’re right in the mix,” Moynihan said. “We just played the second-placed team, maybe the best team in the Big Ten, and played very well. If we can keep doing that and building one performance into the next I think we’ll be ready as we come down the stretch.”