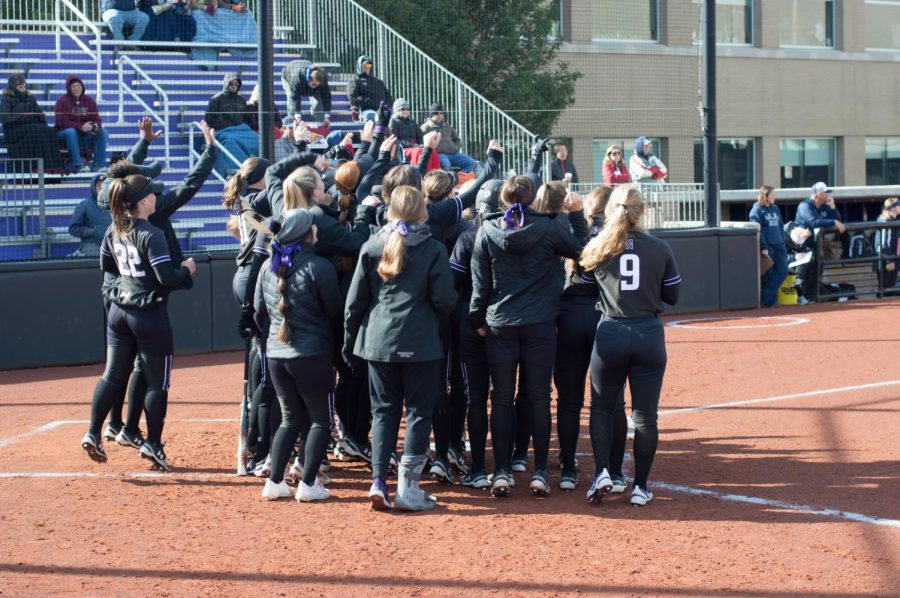 Northwestern celebrates a home run. This year’s Wildcats will look to build off of last year’s Super Regional appearance.

Coming off its best season in more than a decade, Northwestern returned to Sharon J. Drysdale Field this fall to take on five Illinois schools in exhibitions to prepare for the 2020 season. The Wildcats hosted Loyola, Bradley, DePaul, Heartland Community College and Spoon River College over the last three weekends.

NU has a legitimate chance to reach its first Women’s College World Series since 2007 after going 47-13 and advancing to the NCAA Super Regionals last spring. But despite last year’s success, the Cats fell just short of the Big Ten title, lost in the semifinals of the conference tournament and did not score a single run in two Super Regional games. The bittersweet ending left NU hungry to achieve more in 2020.

“We all got a little taste of the Super Regionals and it felt pretty good, and now we realize we’re not satisfied with that,” senior utility player Morgan Newport said. “We’re putting the World Series on our calendar this year because that’s our goal, and I’m really excited to work toward that this winter.”

This fall, the Cats welcomed a class of seven freshmen that Softball America ranked No. 12 in the country. Of the group, catcher Ashley Schultz and outfielder Angela Zedak looked particularly impressive, with Schultz throwing out a would-be base stealer and hitting a two-run home run against Bradley on Sept. 29, and Zedak smashing a triple and a double this past Sunday against Heartland.

Schultz is currently blocked behind the plate by sophomore Jordyn Rudd, who hit .328 with 51 RBIs in 2019 while catching every pitch of the season. Zedak, on the other hand, could see playing time right away, as Morgan Nelson’s graduation left an open starting spot in the outfield.

NU’s highest-rated prospect, Sydney Supple, was the fourth-ranked pitcher in the class and a three-time Wisconsin high school player of the year. She can play first base as well.

While the freshmen are not quite as highly touted as last season’s class, which FloSoftball ranked ninth nationally, the Cats’ upperclassmen have been helping the newcomers get acclimated to the program.

“We learned how to do it last year with that big class, so having another big class come in, it’s been an even smoother transition,” junior second baseman Rachel Lewis said. “The freshmen are very confident, which is awesome to see.”

The Cats welcomed a handful of new coaches this year, though some are familiar faces within the program.

Also joining the Cats is Faith Canfield, who graduated from Michigan last year with a .379 career average and a .579 slugging percentage, as a graduate assistant. Though Canfield comes from a rival Big Ten school, coach Kate Drohan said this gives her familiarity with the conference.

“I like to really bring in people in that position who understand how the Big Ten works, understand the environment we have on our campuses — the focus on academics,” Drohan said. “That’s what makes it such an easy transition.”

Drohan added that Canfield’s experience in the infield would complement Strub’s background in the outfield.

Lily Novak, NU’s starting first baseman the past two years, rounds out the new coaches for the 2020 season, taking on the role of graduate student manager.

The Big Ten is on the rise

Before 2019, no Big Ten team had hosted an NCAA Regional since 2016 — and the last time a team other than Michigan did so was 2014. But last year, the conference had three of the 16 national seeds, including the Cats.

Minnesota, despite finishing third in the regular-season standings, earned the No. 7 seed and won both Regionals and Super Regionals at home to advance to its first Women’s College World Series in program history. The Wolverines also hosted a Regional, but were the only national seed not to advance to the Super Regionals.

All three teams were led by dominant arms last season — Minnesota’s Amber Fiser, Michigan’s Meghan Beaubien and NU’s Danielle Williams — and all three figure to be contenders for national seeds again in 2020.

“We have great pitching in our conference right now, and that’s going to elevate a program really quickly,” Drohan said. “That’s what we saw out of Fiser and Beaubien and Danielle. We’re excited about our growth, but I still think we have a long way to go.”

Big Ten schools have to spend the first month-plus on the road because the season starts early February. As a result, the balance of power in the sport has always resided in the South and West, with the Pac-12 sending three teams to Oklahoma City last year and the SEC earning six national seeds.

But the strong showing by the Big Ten in 2019 benefits the sport as a whole, Drohan said.

“The Big Ten conference has such a great tradition on the softball side of it,” Drohan said. “It’s good to see us back there and hosting the postseason on our campus. That’s the best way to elevate a conference.”

What’s next for sophomore class

From winning all-Big Ten accolades to pitching 10-inning complete games to blasting homers on top of Welsh-Ryan Arena, several of last year’s freshmen had big first years with the Cats.

But Drohan said the new sophomores are looking ahead to this season.

“There’s a lot to be said for how people talk about your sophomore year, but it’s what you make of it,” Drohan said. “They love the game, they love practicing, and in the first four weeks already, they’re right back to where they left off.”

Drohan spotlighted sophomore Lauren Dvorak, who redshirted last year, and said the California native has “come along well” and impressed her during Fall Ball.

This year’s sophomores will look to avoid the “sophomore slump” and make necessary changes. Lewis experienced this herself last season — her batting average fell from .351 as a freshman to .228 as a sophomore.

“People had a lot more film on me from one year to the next,” Lewis said. “I was a little more in my head last year… but I’ve just got to be able to make those adjustments, and I think that’s what my biggest working point this offseason is going to be, just getting out of my head and playing like I normally do.”