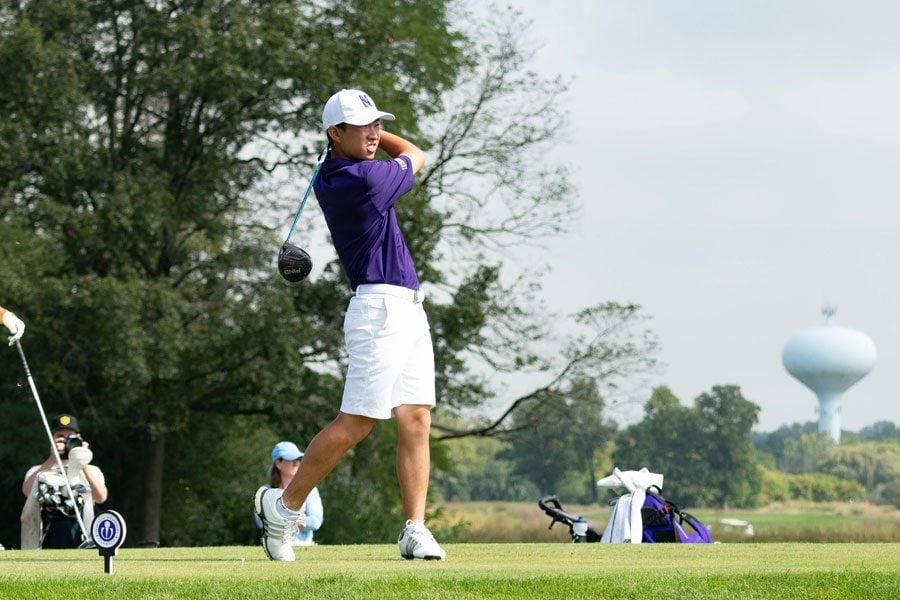 James Imai swings his club. The freshman shot even in second and third round of the tournament.

Northwestern’s performance at the Crooked Stick Invitational tournament can be summarized in one number: 293.

That’s the number of strokes the Wildcats recorded as a team in each of the tournament’s three rounds on Monday and Tuesday. NU’s remarkable display of consistency helped the Cats secure a solid third-place finish in a crowded 14-team field in Carmel, Indiana.

“It was a little bit of a coincidence,” coach David Inglis said. “Two hundred and ninety-three was the low round (in the final round) with the wind. I felt like we were in a position to really play a little bit better… Overall, it was a very solid tournament.”

Like the Cats’ previous tournament, sophomore David Nyfjäll led the way. The Sweden native opened with a sterling 2-under-par highlighted by an eagle on the Par 5 11th hole. He followed up his strong start with back-to-back even-par rounds to finish fifth among individuals.

In addition to the sophomore standout, much of the heavy lifting for NU was done by underclassmen. Freshmen John Driscoll III and James Imai shot even-par in the second and third rounds, respectively. Driscoll’s 13 birdies in three rounds trailed only Leach’s 16. His play drew praise from Inglis.

“That was his best performance so far,” Inglis said. “He brings a lot of energy to the team, and he’s just really fun to be around.”

Driscoll tied for 13th in the field of 78, and Imai checked in at No. 21. The latter tied with sophomore Yannick Artigolle, who had a decent outing competing as an individual, including a one-under second round and an eagle in Round 3.

Rounding out the Cats’ quintet were junior Eric McIntosh and senior Everton Hawkins, who carded identical scores of 11-over and both finished 40th.

Georgia captured the tournament’s team crown, edging out Vanderbilt by one stroke. The SEC powers were at least 11 strokes clear of NU, which tied with Marquette for third; Ohio State, two strokes behind the Cats, rounded out the top five.

As a team, NU was a terrific 17-under for the tournament on Par 5 holes, a continuation of a season-long trend of stellar play on high-par holes. Of the Cats’ four competitions thus far, NU has scored lowest-to-par on Par 5 in three, with the only exception being the season-opening Windon Memorial. Driscoll, Nyfjäll, Artigolle and Imai all ranked among the top ten individuals on Par 5 at Crooked Stick as well.

“I think Par 5 holes are a little bit more of a risk-reward type of hole,” Inglis said. “We seem to do well when we have that challenge in front of us.”

Crooked Stick marked the fourth and final tournament of the Cats’ autumn season, which saw NU steadily improve from eighth- and 11th-place finishes in a pair of September tournaments to second- and third-place finishes in October. The Cats will carry that momentum into the 115-day layoff that lasts until the start of the Big Ten Match Play tournament on February 7.

“We’re getting better, we’re improving,” Inglis said. “It’s always a bit of a challenge at the very beginning of the season to know where everybody’s at. (Crooked Stick) was a nice way to wrap up the fall. It showed how they’ve progressed.”