Van De Loo: So, you think you can set a federal precedent? 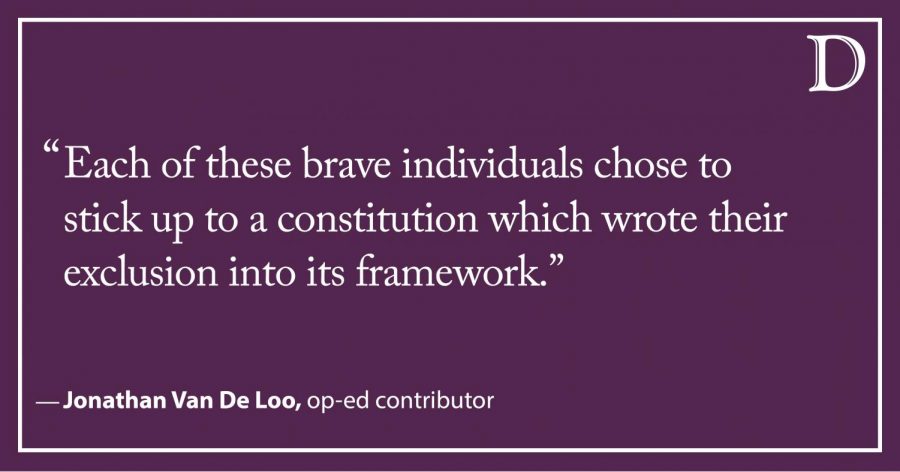 One paying attention to news sources in the past week may have noticed an influx of the following words used in articles: “LGBTQ+,” “workplace discrimination,” “Title VII,” “the basis of sex” and “transgender rights”.

The issue at hand: LGBTQ+ discrimination in the workplace. Do LGBTQ+ employees fall under federal protection?

These cases provoke strong emotional responses from members on any side of the political spectrum. Members from all sides are eager to see how these cases will set new legal precedents, affecting the whole nation. These big waves of change had small beginnings. As a reader of headlines, I found myself getting caught up by the words of commentators without ever having heard the words of people directly involved with the cases directly quoted.

Donald Zarda decided in his early 20s to make a career out of his passion for jumping out of the sky. Zarda, at the age of 40, was fired from his job after a client’s boyfriend claimed he sexually harassed her. As a professional skydiving instructor, Zarda frequently made jokes about his sexual orientation in order to ease the nerves of female clients strapped to him during jumps. One client shared one such joke with her boyfriend, who reported it to Altitude Express. Subsequently, Zarda was fired.

Zarda filed suit against Altitude Express in 2010, arguing his firing was due to his sexual orientation.

He died in 2014 after a skydiving accident in Switzerland, and the suit is being continued by his surviving family.

Aimee Stephens, born and raised in Fayetteville, N.C., began to question her identity around the age of 5. With the rise of the internet years later, Aimee began to discover more about the identity she had locked away for so long. When further conversation around Stephens’ identity arose within her marriage, her spouse encouraged her to see a therapist. These sessions led Stephens to understand that she was transgender. Stephens found support from most people; her workplace, however, was another story. She remained closeted, presenting as male despite knowing it was not her truth. The stress of this double life led Stephen to contemplate taking her own life. In 2013, she wrote a letter to those at her job expressing her decision to transition. She was in the room with her boss, Thomas Rost, while he read the letter. Two weeks later, she was fired by Rost for violating the company’s dress code. After being fired, Stephens struggled to find other employment and retired in 2014 after her kidneys failed.

Stephens’ case is the first in US Supreme Court history to deal directly with transgender rights.

For Gerald Bostock, the sudden loss of his job came after it was revealed to his colleagues that he played for a gay softball league. He worked in Clayton County, Ga., and managed the county’s Court Appointed Special Advocates program from 2003 to 2013. In 2013, Clayton County conducted an audit of funds utilized by Bostock, and two months later, fired him for “conduct unbecoming a county employee.” At the time Bostock was fired, he was recovering from prostate cancer. Along with losing his job, he also lost his medical insurance.

Each of these brave individuals chose to stick up to a Constitution which wrote their exclusion into its framework. This serves as an important moment of reflection for us as citizens of the U.S. to reflect on what justice means to us.

In a time of buzzwords and salacious headlines, it is easy to forget about the humans who the news stories are about. Each of the individuals involved in these cases has been making their arguments for nearly a decade. They are devoting time, energy, and money to stand up for not only themselves but the underrepresented populations within the LGBTQ+ community. Their examples are a testament to the complex journey one can go on when they hold fast in their pursuit of what they believe is right.

Jonathan Van De Loo is a Communication freshman. Van De Loo can be contacted at [email protected] If you would like to respond publicly to this op-ed, send a Letter to the Editor to [email protected] The views expressed in this piece do not necessarily reflect the views of all staff members of The Daily Northwestern.