Thuillier: Being a third culture kid is a complex experience 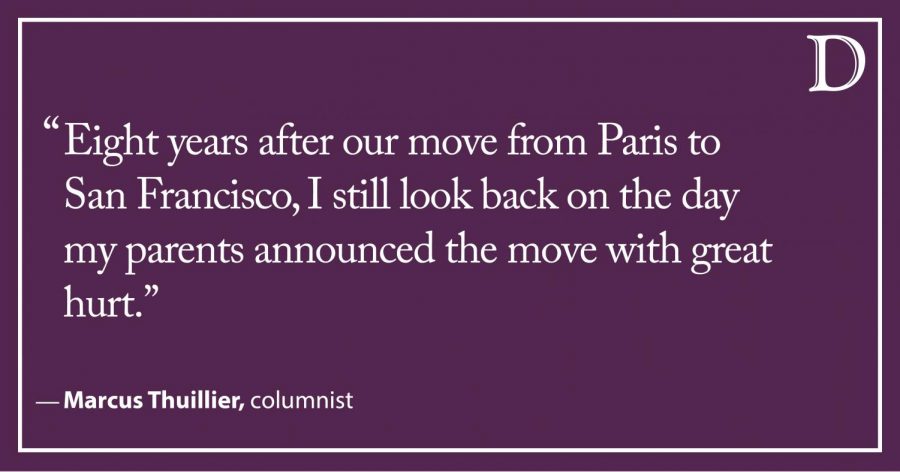 While editing my piece about naturalization last week, my editors asked me how it felt to be a third culture kid. After living here for eight years, it was the first time I had heard of the term, and I had to ask for clarification. I listened carefully, as my editors listed many details of a third culture kid’s life. It quickly felt like I was being described to a T.

My family had lived in France for generations, and I was born there. But when I was three years old, my family decided to make a shift. Over the next 12 years, I would live in four different countries. Everywhere I went, I was kept in French schools, further cementing my experience as typical of a third culture kid.

It is common for TCKs to attend international schools, with many other students just like them, and this experience greatly defines their childhood and adolescence growing up in foreign countries.

I lived in Hong Kong for a year, Germany for eight years and Paris for four years before moving to San Francisco at the age of fifteen. Growing up, I was always sure that I was experiencing something very different than my counterparts but never had a way of explaining it.

Looking back, I think growing up all around the world has some major advantages. I was able to pick up two additional languages, German and English. It led me to have broader views of the world and better cultural awareness, which is common for TCKs. I was also lucky to only move during major periods of inevitable changes for me: when I was entering middle school and high school. Combining the exposure to different people and a seemingly seamless transition between key moments of my life was an enriching experience.

However, beyond these advantages come the difficulties.

Being a TCK isn’t always easy. As expert educational consultant Rebecca Grappe points out, these kids very frequently lose their sense of belonging, recognition and connection. Identity loss has implications that generally show themselves during adulthood.

There’s also no one to actually blame for becoming a TCK. Most of the times these moves are made out of sheer necessities. In many cases, it is one parent’s work obligation that lead to the frequent moves, and the child has no input. Eight years after our move from Paris to San Francisco, I still resent the day my parents announced the move. Abandonment is greatly associated with being a third culture kid and it’s not just restricted to places.

The defining feature of a TCK, however, is their ambiguous relationship to a place they call “home.”

Sometimes there isn’t really a home at all. Mannerisms and habits picked up along the way clash with each other and ultimately get diluted by the prevailing norms of wherever the person ends up living. In such cases, coming back to their place of birth makes the estrangement with the home country even deeper, something that undeniably creates torment and anguish.

I was lucky enough to have a different experience.

I lived in Paris between the ages of 11 and 15, as well as for three years when I was born. Even though I spent more time living in Germany and the U.S., Paris to me is home, and it always will be. I have an incredible level of comfort and satisfaction with the city. I know I will never feel the same way about a place. It is a feeling that keeps me grounded and will help me when I inevitably pack up my bags and move again in the future. For TCKs, the definition of home is something most have a hard time coming to terms with.

But I have a definitive answer to the question “where are you (really) from?” I’m really from Paris. Knowing this helps greatly when dealing with feelings of loss and confusion that result from the perpetual motion of my world. I feel lucky in that I know I will always have a place to go back to, the one where I will never be an outsider. I am still coming to terms with my past experiences and how they’ve impacted the person I have become.

Being a third culture kid has treated me well so far, and I just want to continue to see how my past will shape my future.