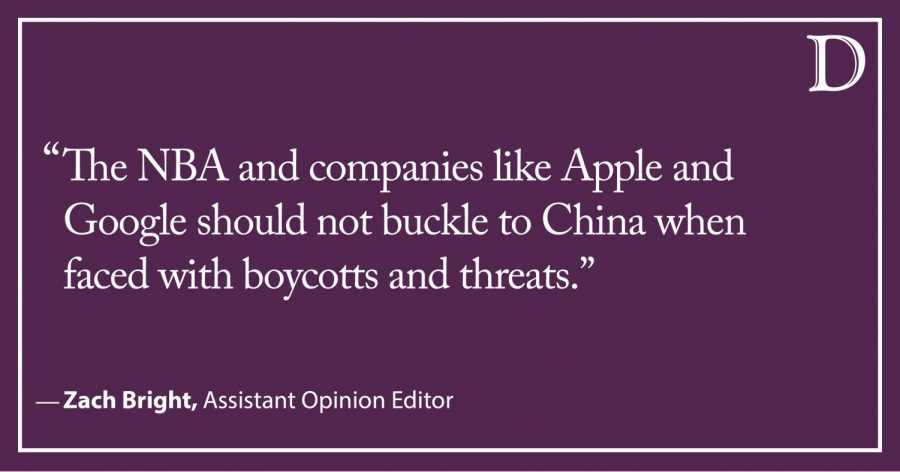 In recent months, Hong Kong has been the site of a power struggle between the island’s natives and the People’s Republic of China’s government. What started as a protest to an extradition bill has now grown into a pro-democracy movement.

But American actors including the NBA, Google and Apple have been spineless, putting profits over people, when it comes to defending fundamental freedoms that global citizens deserve.

Protests started in June, after Hong Kong’s Chief Executive Carrie Lam proposed legislation to allow people accused of a crime to be extradited by the mainland Chinese government. This was extremely unpopular, with critics claiming the bill would give China reign to arrest political dissidents. Since then, the bill has been withdrawn, but the movement has grown into one that is demanding democracy, freedom and the continuation of Hong Kong’s autonomy.

Earlier this month, the NBA entered the conversation, after a tweet from Houston Rockets general manager Daryl Morey. He shared an image of the protesters’ rallying cry: “Fight for Freedom. Stand with Hong Kong.” Yet rather than protecting the freedom of speech of its officials, the NBA has instead decided to do damage control after losing Chinese sponsors and receiving backlash from mainland China.

Companies like Apple and Google have also taken action to pacify mainland China’s government. Last week, the platforms removed several apps used by the protest movements from Hong Kong user’s app stores. Companies putting their fingers on the scale through such actions are stifling democratic progress.

American companies should not be in the business of carrying out the Chinese government’s demands and policing global citizens.

Politically, there is bipartisan support for standing up to China. A letter from members of Congress has been sent to NBA Commissioner Adam Silver, calling for the league to suspend all relations with China until government-controlled broadcasters and sponsors end their selective boycott of the Houston Rockets. Signatories include members from across the aisle, like U.S. Rep. Alexandria Ocasio-Cortez (D-N.Y.) and Sen. Ted Cruz (R-Texas).

The NBA and companies like Apple and Google should not buckle to China when faced with boycotts and threats. Through their actions, they are endorsing gross violations of human rights and are condoning a crackdown on civil liberties for their own profits.

The people of Hong Kong deserve more, and these organizations should not take the rights that they have for granted.

Zach Bright is a Medill Sophomore. They can be contacted at [email protected] If you would like to respond publicly to this op-ed, send a Letter to the Editor to [email protected] The views expressed in this piece do not necessarily reflect the views of all staff members of The Daily Northwestern.