Some students weigh convenience versus price when grocery shopping around Evanston 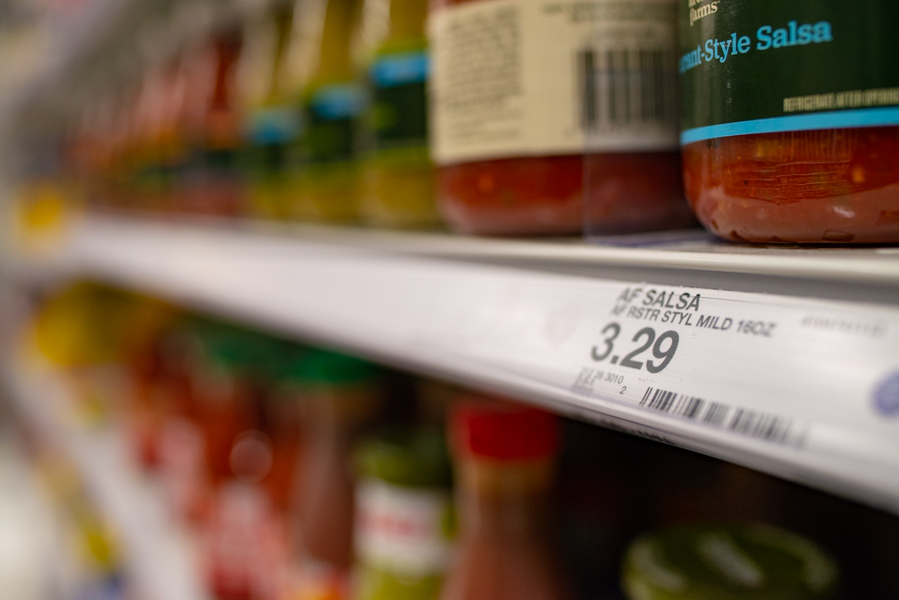 Items at a grocery store. Students compared prices at Target to convenience stores on campus.

How much does a 25-minute walk cost? For McCormick freshman Sarah Bogan, it’s equivalent to a portion of the $7 she put into a recent purchase at the convenience store at Foster-Walker Complex, known as Plex.

“Even if it’s slightly more (than somewhere else), I’m willing to pay that convenience price,” said Bogan, who lives in Elder Hall.

When buying a packet of pistachios and two cold milks, the fact that the walk across campus is a shorter trip was a bigger priority than the savings Bogan might have gotten had she walked to the Target in downtown Evanston. Plus, at Plex, she had the option of using dining dollars on groceries.

Advertised as a meal plan benefit, dining dollars — accessible on a student’s Wildcard — function as a currency usable on meals and marked-up groceries at Fran’s Cafe, Plex, Norris University Center and Lisa’s Cafe featuring Plum Market. The gap between the cost of groceries at on-campus locations versus off-campus stores means customers often pay extra for “convenience.”

For Communication freshman Kylie Lin, an 1838 Chicago Ave. resident, that 25-minute walk doesn’t exist, and dining dollar locations aren’t even a consideration. Target and Whole Foods — which are about 9 and 5 minutes away on foot, respectively — are Lin’s go-to spots, but she said she couldn’t imagine walking over if she were to live north.

“If I lived on North Campus, it would very hard to walk to Target or Whole Foods. I’d probably go somewhere more convenient than Target,” Lin said. “Besides, by the time it gets to winter, it’ll be hard for people to make a trek that’s a mile or more just to get groceries.”

A closer inspection of prices at campus locations reveals a tougher bargain for Northwestern students.

Lisa’s Cafe, for example, is one of the few campus grocers easily available to residents of North Campus. At Lisa’s, expect to pay $1.48 for a packet of Doublemint gum, which costs around 99 cents at any general convenience store. The listed price for Popchips at Lisa’s is more than a whole dollar above — $5.19 versus $3.49 — their retail price at Target.

But some students believe the choice to buy on campus shouldn’t be determined simply by where you live. Regardless of any potential convenience, some mark-ups at dining dollar locations can be significant. In the grocery section of Plex, a packet of four toilet paper rolls totals $4.99, while a 12-package deal at Target is only $5.79. Plex also sells detergent for $7.99, even though Target stocks the same brand in a much larger quantity for only $5.19.

Some students question whether North Campus residents simply pay higher prices for not living closer to retail stores/ Medill freshman Eric Epstein, a resident of Jones Residential College, would rather make the walk.

“For me, the price is more important than the convenience,” Epstein said. “Even if Target was further away, if I lived North, I’d still go there because I’m cheap, and I like good deals.”