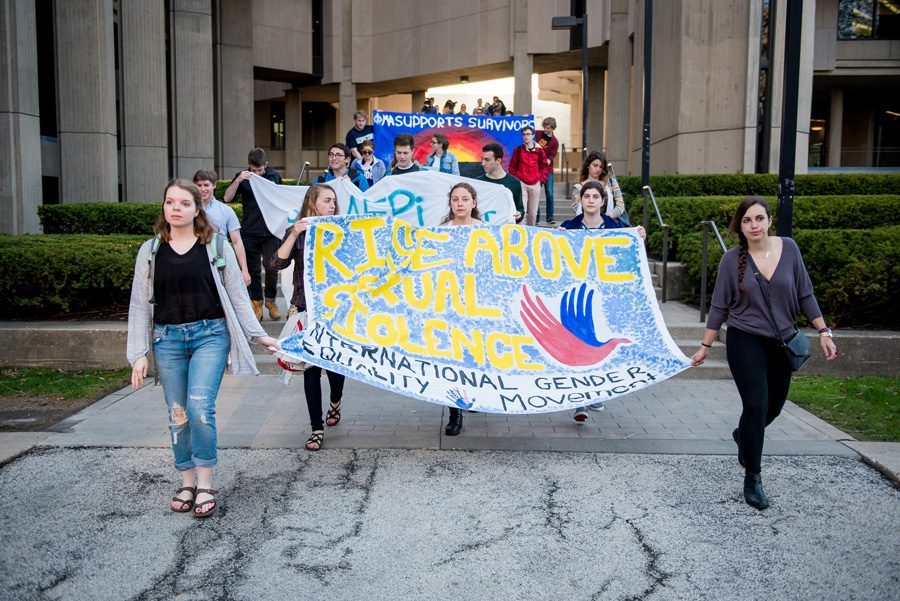 Student protesters during the 2016 Take Back the Night annual march. Northwestern’s Office of Equity released the results of the 2019 Association of American Universities Campus Climate Survey on Tuesday.

The survey, launched in April 2019, reported that 11.6 percent of Northwestern students experienced at least one incident of nonconsensual sexual contact since their enrollment.

This survey saw a higher participation rate than when it was administered in 2015 at 25.2 percent compared to 15 percent. However, only 74.3 percent of respondents said that they felt it was very or extremely likely campus officials would take a report of sexual misconduct seriously. The numbers also differ for different groups — only 50 percent of undergraduate women responded “very or extremely likely,” while 46.1 percent of TGQN respondents did.

Data from the first survey was released in 2017, revealing 179 complaints during the 2015-16 academic year. That survey was used to expand the Office of Equity to give students more resources to report cases of sexual misconduct and to help guide survivors along the healing process.

Information from the 2019 data will help the University provide more targeted responses and cater more specifically to demonstrated student needs.

“Data and information obtained from the AAU survey will help Northwestern and other schools strengthen their ongoing efforts to deal with the critical issue of preventing and addressing sexual assault and misconduct on campus,” Colleen Johnston, director of sexual misconduct and resources and Title IX coordinator for the Office of Equity, said in a University release.

The Office of Equity will release a summary of the work done and forthcoming action items in May 2020, the release said.