Everything Evanston: Community leaders talk push for reparations and inside Tomate Fresh Kitchen 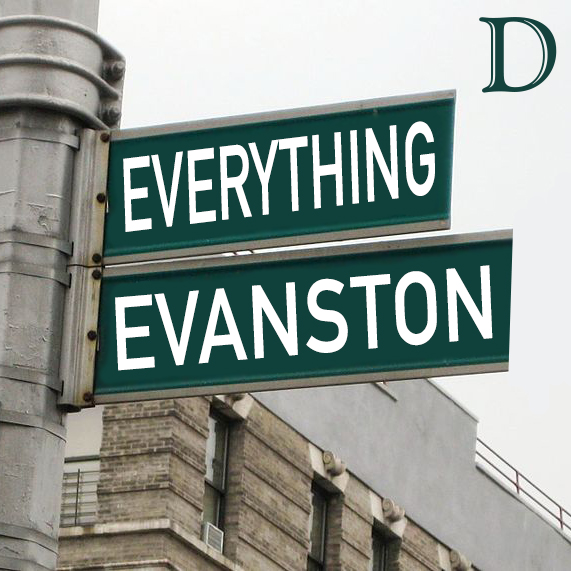 KALEN LUCIANO: From The Daily Northwestern, I’m Kalen Luciano. Thanks for tuning in, and welcome to the first episode of Everything Evanston. In this installment, community leaders discuss their hopes for reparations, and we take an inside look at the beloved couple who owns Tomate Fresh Kitchen. Last month, aldermen approved reparations recommendations by the Equity and Empowerment Commission in a longstanding effort to address wealth and opportunity gaps experienced by black residents. Ald. Robin Rue Simmons of (5th) is helping lead a plan to bring reparations to Evanston.

ALDERMAN ROBIN RUE SIMMONS: In Evanston, we are a progressive and conscious city, and we’ve done a lot already in the name of equality and equity. We have had many ceremonial occasions and honorific statements and resolutions and so on. From my research and my experience, it has not been enough to repair the damage done to black families, black businesses and historically black parts of our community.

LUCIANO: Rue Simmons isn’t the only one who’s made this observation. From a young age, Kemone Hendricks, a community organizer and black resident, saw firsthand the injustices in her community. Her and her family moved from Jamaica to Evanston, where she faced racial inequities in school.

KEMONE HENDRICKS: The school systems, I would say, do not treat black children the same as they do white children, so there’s a lot of injustice going on surrounding education. We’re still suffering. There’s still a lot of injustice around housing, jobs and just everyday incidents that it still occurs in Evanston. It’s what I think long overdue for the community.

LUCIANO: From Facebook posts to administrative assistance for the Equity and Empowerment Commission, Hendricks tries to support the reparations effort in any way she can.

LUCIANO: Over the course of the year, former Ald. Jane Grover (7th) worked with eight other commissioners on the Equity and Empowerment Commission. They listened to community members like Hendricks and developed the reparations plan.

JANE GROVER: So the commission, at the urging of Ald. Rue Simmons, took up the issue of reparations. We’re looking only for solutions, not for causes, not for repercussion, but solutions to this wealth and opportunity gap. How can we address those things in Evanston?

RUE SIMMONS: The initial formal communication came from me in February of this year, and that was after getting to this point, working really hard, and realizing that a reparation is the answer.

GROVER: So the commission agreed to take it up. We affirmatively absorbed the issue into the commission’s work, and that meant that we convened two significant, well-attended community meetings a few months ago to take the community’s temperature on what they saw as solutions for this wealth and opportunity gap.

RUE SIMMONS: We’ve had at this point well over 100 Evanston residents and stakeholders and leaders and thought leaders in this space that have contributed their thoughts, given their feedback and suggestions on what we can do to make a difference, how we got here, who should be considered in the reparation and possible ways that we can fund it.

LUCIANO: Now that the aldermen approved the commission’s recommendations, the plan will move to a subcommittee, including Rue Simmons, Ald. Ann Rainey (8th), Ald. Cicely Fleming (9th) and legal staff. The recommendations focused on economic areas such as homeownership opportunities and expanding job opportunities for black residents. Rue Simmons welcomed the change.

RUE SIMMONS: I was not sure that everyone understood how significant and historic this is because we haven’t funded it yet and we haven’t written the policy yet and we haven’t seen the impact yet, but even the statement that we have agreed by resolution months before that we are anti-racist, that we are for black equality, that we are looking to uplift the impoverished, we’ve done that already but to say that yes, we are approving a local reparation for the City of Evanston, I was so excited. I went home and celebrated it with my family and my closest friends. I’m excited to say that we are innovative, and we are leaders in the space for localities that are tackling reparation.

LUCIANO: In addition to solidifying a plan, the subcommittee will also consider sources of funding for it, which Rue Simmons recommends investing $10 million over 10 years to repair black communities. Grover believes this is possible.

GROVER: So Evanston is not the first community to want to undertake a truth-seeking reconciliation process. The question is where do we find that money? The community came up with, I think, some really good ideas for how we might fund a reparations fund. We’re going to be doing it in our own way. We’re going to find the Evanston way to do it, and it’ll be a long process, and we hope it’ll be a full community process.

LUCIANO: Rue Simmons said she wants to see this plan pass by the end of the year.

RUE SIMMONS: I’m hopeful that it will be a model that other institutions and localities will use, so that we can bridge the unfortunate wealth divide that is a direct result and consequence of slavery. In this 400th year of black resilience, we are acknowledging that this is the 400th year of slavery starting here in America. Let’s do it in this year. Let’s celebrate in this year black resilience and a commitment to equality for black people.

HEENA SRIVASTAVA: At the end of each episode, we’ll finish with a slice of life focused on Evanston. In this installment:

SRIVASTAVA: From the Daily Northwestern, I’m Heena Srivastava. These dishes are classics at the local favorite Tomate Fresh Kitchen, a family-run Mexican restaurant famous for their authentic flavors and friendly service. The Daily talked to owner and head chef Tania Merlos-Ruiz to discuss the development of Tomate, her culinary skills and what family means to her.

MERLOS-RUIZ: So I started really young with my mom and my grandmother. I would cook with them; they’d give me little tidbits and secrets. I’d always liked working in restaurants whether it was being a manager, being in the back or being in the front.

SRIVASTAVA: Tania moved from Guatemala to Chicago in 1972. After working at a few restaurants, she noticed a lack of innovation among her colleagues. She wanted to do something of her own.

SRIVASTAVA: While her husband Polo was the manager of a clothing store, Merlos-Ruiz attended Washburne Culinary Institute in Chicago. She took her skills from culinary school and combined them with her cooking background from Guatemala. Soon, Tania found the final push that allowed her to start her own business.

MERLOS-RUIZ: How was it that we got here? Well, we started selling empanadas at the Farmers’ Market, but in one of my winter markets, I met this woman, Mary Lewis, and she’s the one that came up with my logo. But she would tell me to come over to her house and so I would go different ways, different routes to get to her house, and one day I just happen to take Noyes, and I saw a small “ For Rent” sign. I mean, it wasn’t something that we had been planning or anything. I met the owner the following day. I remember that as soon as I walked in, I knew.

POLO RUIZ: It was hard though, because it was just us. We didn’t have no money. Our savings was put in this.

SRIVASTAVA: With it’s opening in 2013, Tania Merlos-Ruiz and her husband Polo were thankful to have a kitchen where they could cook and create recipes. Their business began with empanadas, and grew from there. Once Tania secured the storefront, they knew it was time for bigger ideas. It was Polo who suggested the menu expansion.

MERLOS-RUIZ: I knew we couldn’t sell just empanadas so were like, “What do we do?” My husband goes, “Why don’t we sell burritos?” I was like “Okay!”

SRIVASTAVA: Tania has more ideas up her sleeve from new entrees to introducing pastries.

MERLOS-RUIZ: First of all, we’re working on some other vegetarian dishes; I’m trying to do a vegetarian Al Pastor. Maybe make some other kinds of desserts. I love doing pastries.

SRIVASTAVA: Tomate’s rich flavors are not the only thing that brings in customers. Students and residents have come to love Polo’s warm smile, positive energy and iconic hat.

MERLOS-RUIZ: The thing about my husband that people love is that he knows their name, their faces, what they want to eat. All of that.

POLO RUIZ: I always like to talk to you guys. You guys are by yourselves, studying, getting real busy. Sometimes, you know, you are always looking for friendly faces.

SRIVASTAVA: Polo eventually left his job in retail to help his wife’s career. He came to Chicago from Mexico in 1990, and met his future wife five years later.

MERLOS-RUIZ: So, a friend of mine took me to the Church, and he happened to be there. He was the leader of the church group, of the youth church group, and it was right away. We’ve been together ever since. When my father passed away, like a year later, that’s when, when I met him. And I started going to the church because I wanted to find that spirituality, I felt the need to. And I think it was just God taking me to go meet him. It’s your typical story. Because I went in, and I wasn’t thinking of looking for a boyfriend. And it was so funny, because two weeks before I went to the actual church, I dreamt of myself getting married in a white dress, and I had never done that.

SRIVASTAVA: Polo and Tania have been married for 22 years. They had a baby boy in 2003, who is now a junior in high school.

TANIA: He’s looking at being in actuarial, actuarial science. I am so proud of him, he’s an honor student. He gets all A’s. After school, he comes here, he works with us.

SRIVASTAVA: On the wall next to the cash register, there’s a black-and-white photo of three young boys and a young girl.

MERLOS-RUIZ: That’s myself and my three brothers in Guatemala. The one to the left, Walter, he has been with me since we opened up, since we were doing the empanadas. But he passed a year ago. He was a good brother. He was always looking out for us.

POLO RUIZ: That was another thing that we stopped going to the farmers’ market. Because he was getting sick. He used to help us a lot though. Yeah, we miss him a lot.

MERLOS-RUIZ: So one thing that I have planned for Dia de Los Muertos. I am going to put up my alter right there, and I am going to invite students if they have a small picture of a family member or friend. And we can put it up there, you know, to remember all of those in our lives, because that’s what it’s about, Dia de Los Muertos. You remember, they’re not gone. It shouldn’t be something so scary. You know, I feel, at the end, we are all going to meet together again. They are truly dead when we forget about that person. We never forget those people.

SRIVASTAVA: To Tania and Polo, Tomate is all about family.

MERLOS-RUIZ: Sometimes we see the students like they are our own kids, because we see them from the beginning to the end when they graduate. We see them throughout, struggling through their finals, going on spring break.

SRIVASTAVA: Most of all, they want people to know how much they love their job.

POLO RUIZ: Someone told us, you guys only want to cater to the students of Northwestern. I said, “Okay, yeah!” We love to keep on doing that. There’s nothing wrong with it.

SRIVASTAVA: Thanks for listening. I’m Heena Srivastava, and this is Everything Evanston. See you in our next episode.