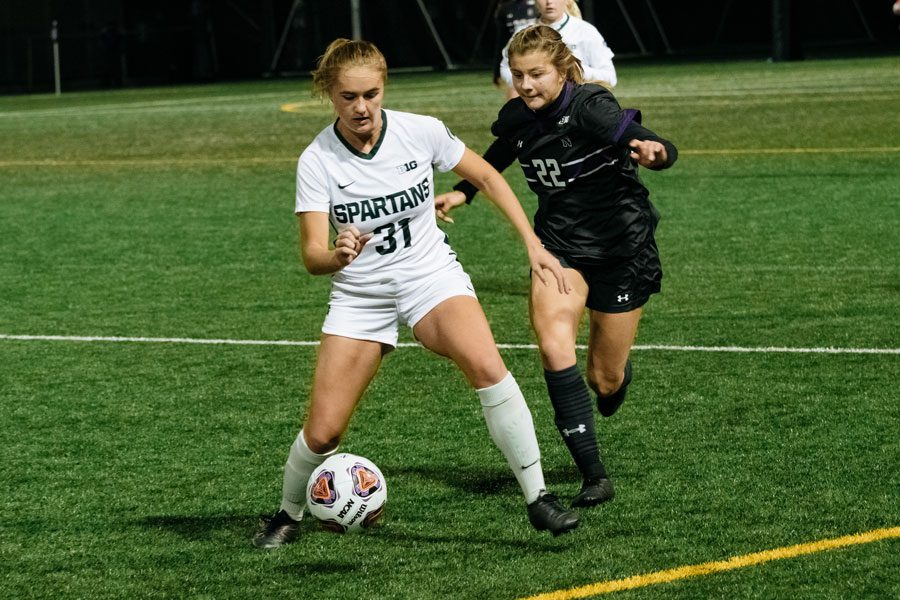 First year midfielder Lily Gilbertson attempts to steal the ball against Michigan State defender. Gilbertson’s goal against the Spartans was the first of her Northwestern career.

Within the first six minutes of Sunday’s game, Northwestern had taken two shots against Michigan, and the crowd’s high energy reflected the Wildcats new, aggressive offense.

It didn’t last long, and by overtime, NU could have used some of its first-half energy.

At the start, NU looked strong and composed on the ball, but freshman midfielder Lily Gilbertson said that they could not capitalize on their chances.

“We were a lot more dangerous and we had a lot more opportunities but obviously we didn’t finish on as many as we would’ve liked to,” Gilberston said. “But I think it was big for us to finally start attacking with a lot more confidence and strength going forward.”

The Cats controlled possession early against a fast opposing team, and Gilbertson and freshman outside back Marianna Annest both had early shooting chances that almost gave NU an early lead.

Offensive momentum slowed as the game wore on and became a battle of possession between the two teams. Nobody scored until the 89th minute when Michigan midfielder Nicki Hernandez headed the ball into the back of the net off a corner kick.

Despite the disheartening last-minute goal, the ball was quickly sent into the box where the Cats drew a penalty kick off a Wolverines handball, and junior forward Mikayla Hampton converted from the spot to send the game into overtime.

The Cats did not get any shots off in overtime, while Michigan had multiple chances. Meredith Haakenson scored the game-winning goal for Michigan off a through ball that split the NU defensive line in the 98th minute.

“They were able to build out well from their outside back into the midfield,” Annest said. “We didn’t have adequate pressure. They got a ball in and that same slashing run was able to beat us. I think we needed to be a little tighter and compact in the backline.”

On Friday, graduate midfielder Olivia Korhonen gave NU a 2-1 win over the Spartans (8-6-1, 1-5-1 ). Korhonen scored a header in the top right corner of the net off a cross from sophomore forward Olivia Stone. Earlier in the game, Gilberston scored an equalizer in the 14th minute.

With four regular season games left, the Wildcats fell to seventh in the conference standings with the loss. Coach Michael Moynihan said the team could have used more practice in the lead up to this weekend’s doubleheader, but the players had to save their energy. Instead, he said he spent more time focusing on the players’ mentality during the week and was impressed by their execution for most of the two games.

“I told the girls we just played the (first) place team right now — maybe the best team — in the Big Ten and played them very well,” Moynihan said. “If we can keep doing that and building one performance to the next, I think we’ll be in good shape as we come down the stretch.”