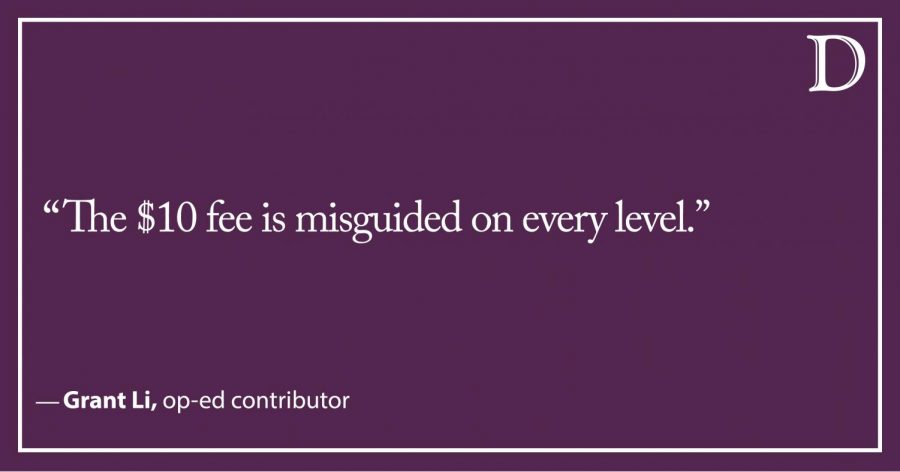 Recently, Northwestern implemented a policy where multiple lockouts will result in a $10 charge, and an additional $25 if the temporary card is not returned within 24 hours.

In 2012, the University attempted a similar policy of monetarily punitive measures where the third lockout would result in a $200 charge. Both of the protocols were also marked by a lack of publicity, leaving most students unaware.

The $10 fee is misguided on every level. The implementation of the fee implicitly suggests that with it, lockouts will decrease and students will learn to be more responsible. Without it, students won’t care as much and lockouts will soar. That view fails to realize that lockouts are already a serious annoyance even without the fee. Only a week ago, my neighbor put just a little too much wind into moving the door and accidentally locked himself out. It was nighttime and raining hard outside — needless to say, he regretted having to make the trip to the RA desk.

Right now, I’m already paying more than $3,920 per quarter for my single in Foster-Walker, on the high end of Northwestern housing rates. Under the two-year on-campus residency requirement, I had no choice but to live on campus. Due to overcrowding of dorms, caused in part by two-year requirement, this was the cheapest room available. Now, there are 82 days in the quarter from September 24 to December 14. That means that the per day rent is $47.80. If we generalize a month to 30 days, that’s about $1,434.15 per month. All that so we can have a hundred square feet or so. Meanwhile, I could get a 2 bed, 1 bath 700-900 square foot apartment in CLK Evanston for about the same price, but split between roommates and with much more space.

For such a high price that we cannot avoid paying, what are we getting? The large numbers I see on my invoice are more than sufficient to teach me responsibility. Asking for a little leniency is not much. No employees are inconvenienced — I’ve gotten locked out once so far and the only person I bothered was the student paid to be at the desk at Willard. All they have to do is activate a temp card, and we can both go on with our days.

Even the most responsible of us will forget their Wildcard on occasion, particularly first-years getting adjusted to taking their cards with them to go to the bathroom. I’m willing to bet that there’s a base rate of forgetfulness that happens when a neuron misfires on a blue moon. Especially as students, there’s a lot going through our heads at once, and forgetting your Wildcard once or twice is practically inevitable.

Sure, students should be more responsible. There’s no disputing that, but there are better ways of doing this. I transferred from another school, where they encouraged students to download the CBORD Mobile ID app, which allows locked out students to swipe their door open from their phones. The system runs through the CBORD CS Gold campus card system, which I suspect Northwestern does not use. Regardless, Northwestern has enormous resources, and I don’t think it would take too much more than simply an earnest effort for the university to put a similar system in place. It would be to the benefit of everyone: fewer security issues with temp cards floating around campus, unbothered housing staff and happier students.

Grant Li is a Weinberg sophomore. They can be contacted at [email protected] If you would like to respond publicly to this op-ed, send a Letter to the Editor to [email protected] The views expressed in this piece do not necessarily reflect the views of all staff members of The Daily Northwestern.