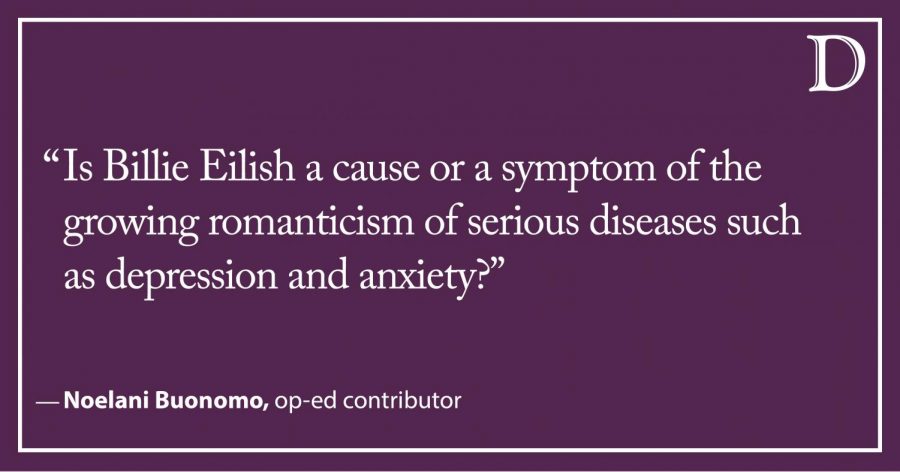 Every generation has its own version of a social counterculture: a group of teenagers and young adults that embody angst, oppose the establishment and embrace the label “outcast.” Wearing their status as misfits proudly, these groups have historically created a large market for music and media dealing with serious, deeply emotional and sometimes violent topics. Whether you call it punk, emo or goth, there’s one thing all these groups have in common: smudged eyeliner.

I’m kidding. Poorly applied eyeliner aside, there remains a vast group whose preferred aesthetic centers around unsettling, disturbing and melancholy imagery. Why exactly is this? Is it merely a product of teenage angst, of a rebellious phase that all young adults are bound to go through? Or could it be a result of the increasing tendency for mainstream entertainment to glorify and romanticize depression, suicide and anxiety?

Through the past two decades, there has been a growing fanbase for unconventional artists, especially those who would typically be classified as “emo.” When bands such as My Chemical Romance, Panic! At The Disco and Pierce The Veil rose to fame in the early 2000s, teens gravitated toward music dealing with serious topics such as depression, self-harm and suicide. Although fans claimed these artists opened a dialogue around mental illnesses, others argued that the lyrics these artists wrote glorified unhealthy thoughts and behaviors by glamorizing symptoms of mental illness. Their concerns seemed valid as artists like Mark Foster crooned over loudspeakers, “all the other kids… better run, better run, outrun my gun” in Foster the People’s hit song, “Pumped up Kicks,” referring to gun violence. These lyrics seem to glamorize and trivialize serious mental health problems. There is grave danger in this romanticization, as it can overshadow people actually struggling with mental illness and create a false impression of how serious these problems can be.

Not only did the lyrics raise eyebrows due to their discussion of disturbing topics, but artists created controversy with the visual content of blood, violence and death. As the 2010s began, a growing number of artists began to capitalize off of this image, including teenage alternative singer Billie Eilish.

Clad in chains, oversized sweatshirts and a gloomy expression, Eilish seems to be an amalgam of every angsty teenager in America. Her lyrics are equally questionable as those found in early 2000s “emo” music. In one song, she drones, “the way I wear my noose, like a necklace.” In her music videos, where she is depicted with jet-black tears flowing from her eyes and spiders crawling from her mouth, the disturbing imagery goes even further.

Is Billie Eilish a cause or a symptom of the growing romanticism of serious diseases such as depression and anxiety? Or is she a 17-year-old girl profiting off the impressionability of other young teens? Either way, the popularity of her music and her vast fanbase is a grave indicator of this generation’s tendency to romanticize mental health problems. This glorification of depression, anxiety and suicidal thoughts can prompt fans to emulate the artists that they admire. The portrayal of depression as hauntingly beautiful or suicide as poetically tragic is dangerous because it encourages impressionable teens to desire these grave illnesses.

The growing number of fans claiming to be depressed or anxious in an attempt to emulate their idols poses a grave threat for those truly struggling with mental health to be recognized. While Eilish claims to advocate for those with mental illness, she has made virtually no concrete contributions. It strikes me as odd that someone who claims to be heavily invested in providing aid to struggling individuals has made not so much as a single donation to relief organizations.

I’m not innocent — I’ve contributed to these artists’ fanbase in the past. I still can’t help but cringe when looking at photos of myself at 14, clad in black combat boots and sloppy makeup. However, after seeing friends and family struggle with their own mental health, I suspect that these artists fail to convey a true reflection of the struggles of depression. It felt wrong and disrespectful to continue supporting them.

For those who truly wish to advocate for mental health, maybe it’s time to ditch the eyeliner and get involved in more effective ways.

Noelani Buonomo is a Weinberg sophomore. She can be contacted at [email protected] If you would like to respond publicly to this op-ed, send a Letter to the Editor to [email protected] The views expressed in this piece do not necessarily reflect the views of all staff members of The Daily Northwestern.