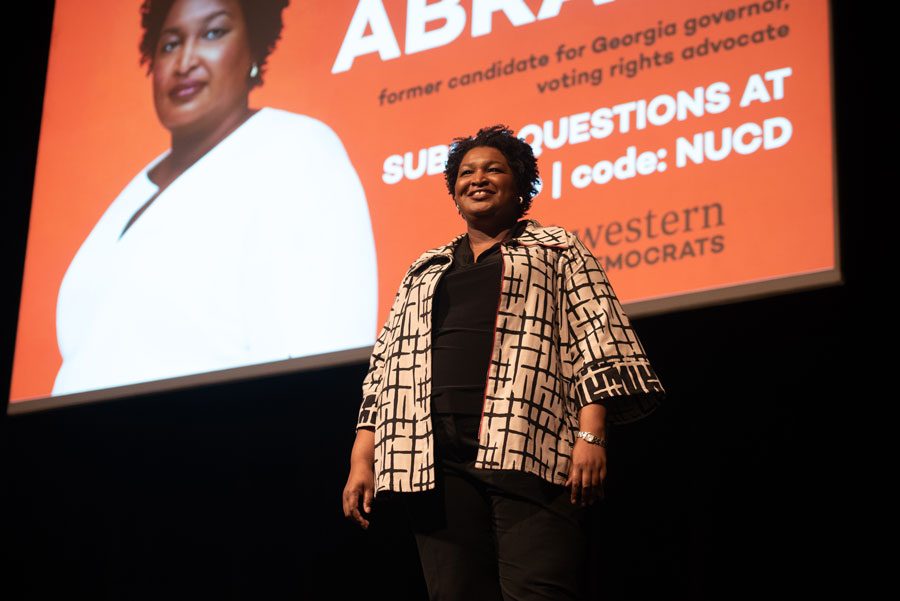 Stacey Abrams speaks at Cahn Auditorium. Abrams discussed the importance of the 2020 Census and her plan for free and fair elections.

Former Georgia gubernatorial candidate Stacey Abrams said though she knows she’s not the governor of Georgia, she still “won the election” — and now she needs the help of college Democrats across the country to ensure future elections are free and fair.

Abrams, Northwestern University College Democrats’ fall speaker, discussed her plans to “recreate” American democracy. She lost her 2018 gubernatorial bid to Republican Brian Kemp — who would become the new governor — by less than two percentage points after the former Georgia Secretary of State wrongly purged over 340,000 voters from registration rolls.

As the first black woman to be nominated as a major party’s candidate for governor, Abrams touted the “new playbook” her campaign used, which involved centering on communities of color and visiting all 159 counties in Georgia.

That playbook resulted in the tripling of both Latinx and Asian Pacific Islander turnout rates and a 139 percent increase in youth turnout rates, Abrams said. White participation among Democrats in Georgia increased for the first election since Bill Clinton’s, she added.

“What we learned in that campaign is that if we see people, if we listen to them, if we understand their needs, we can transform their experiences,” she said.

Abrams also discussed Fair Count, which works to ensure communities that have been previously overlooked will be counted in the 2020 Census.

The 2020 count will be the first census that can be submitted electronically, and experts have expressed concerns about a lack of funding and community outreach during the leadup. Census data determines the allocation of federal funding and the creation of congressional districts across the country.

When asked about the criminal justice system’s role as a tool of voter suppression, Abrams expanded upon the issue of “prison gerrymandering.” When taking the Census, she said the most impoverished communities tend to have the worst counts, and therefore do not receive the proper resources.

Many of those incarcerated come from impoverished communities, she said. But the census counts these incarcerated people in the areas where they’re held, which Abrams said tend to be rural white counties.

“That is voter suppression because you have stripped them of their power to increase their power simply by having the ability to vote,” Abrams said. “When those folks aren’t counted, they don’t get the representation they need.”

Romie Drori, president of Northwestern’s College Democrats, said she appreciated Abrams’ highlighting of the importance of the Census.

“Starting off her speech and starting off the event with, ‘We won in Georgia’ … was really powerful, really ambitious,” Quadir said. “That’s the sort of ambition that we need right now.”

When asked to give advice for young, black female activists, Abrams opened up about the doubts her friends expressed for her as a black woman running for governor, but “no one has done it until someone does,” she said.