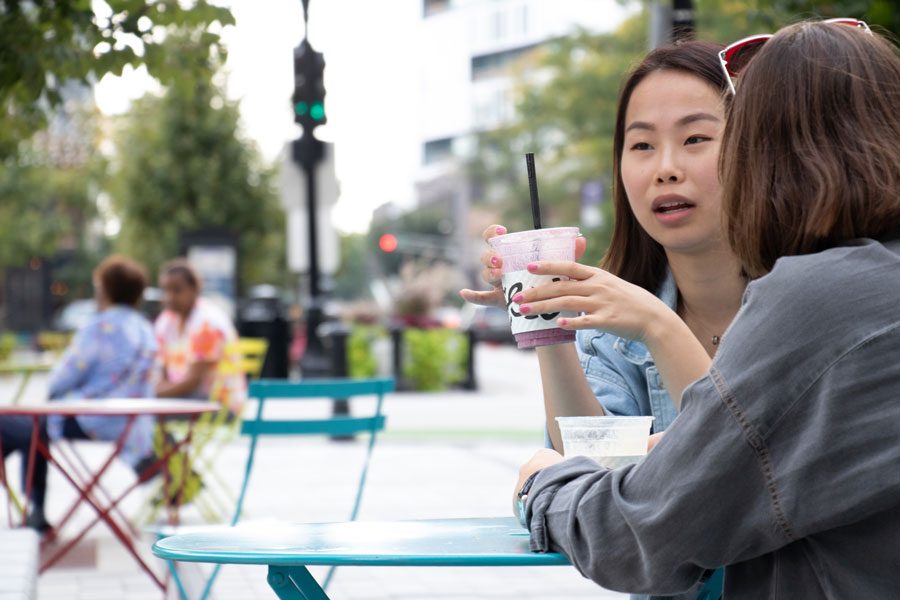 A quick google search of the word “hipster” brings up almost exclusively images of a white men with well-groomed facial hair and flannel shirts. This is just one type of millennial stereotype, but a new study by the Urban Land Institute and PricewaterhouseCoopers is using the term in conjunction with “suburbia” to describe cities, including Evanston, as “hipsturbias.”

According to the report, Evanston is a prime example of this 2020 trend, with millennials increasingly choosing to “live, work, and play” in the northern Chicago suburb.

Fountain Square epitomizes this balanced vibe and has been one of Evanston’s greatest successes, said Mayor Steve Hagerty, who gives the $6 million redesign credit for “reactivating” the city’s downtown district. Hagerty also said some of Evanston’s new coffee shops, like Newport Coffee House and Colectivo Coffee, have added to the city’s recent economic growth.

According to the report, “hipsturbia” — a combination of “hipster” and “suburbia,” — links Evanston to other vibrant communities like Santa Clara, California, and Yonkers, New York, which are known for their vibrant arts scene and balanced retail spaces. However, some say Evanston is too generic and expensive to be hipsturbia.

Molly Liu, a Weinberg junior, said a city needs cheap spots with “$2 teas” and “artsy venues” with conceptual themes to be considered a hipsturbia. Her $7 berry booster smoothie from Milwaukee-based chain Colectivo Coffee, she said, did not fit her qualifications.

Chicago resident Casper Lasken, who works at Evanston Games and Café said the “generic suburb” is not interesting enough to attract hipsters.

“It’s definitely a progressive place,” Lasken said, “but if I want a good place to hang out I’m still going to Chicago.”

Hagerty was slightly more optimistic, saying that Evanston has all the right components to make it “hip.”

“Having Northwestern headquartered in Evanston gives a vibrancy and energy to the city,”
Hagerty said.

The PwC report stated that Northwestern students are the “lifeblood” of Evanston hipsturbia. Last year, the NU student group The .WAV Company began holding open mics at Unicorn Cafe. Other performance venues such as Evanston Rocks and SPACE have also hosted NU groups in addition to seasonal lineups of local musicians.

Breweries and cafés have added to the downtown buzz, and city organizers have capitalized by planning events like Big Bite Night to bring greater attention to local businesses.

“There’s an incredible amount of ownership here in Evanston,” Hagerty said. “It’s why people are so engaged, so willing to invest their time and money. It makes such a difference.”

But most students’ investment ends at Davis and Ridge, said Weinberg junior Miranda Andrade, who works as a barista at Unicorn Cafe.

“The downtown itself is a pretty white place,” she said.

Although Northwestern students benefit most directly from urban development in the downtown district, data from 2019’s first quarter shows that Evanston’s 11 new businesses are distributed across five different wards.

Hagerty said he sees Evanston as “a place for people of all ages,” from seniors to Northwestern graduates who choose to move back once they have families. Similarly, the PwC report said that a hipsturbia’s vibrancy starts with “hip” millennials but leads to benefits for residents of all demographics.

“As we speak there’s a committee planning a new commercial investment in the 820 Davis Building,” Hagerty said. “That kind of new design, that’s exciting.”