Volleyball: Northwestern looks for first conference win in rematch with No. 20 Purdue 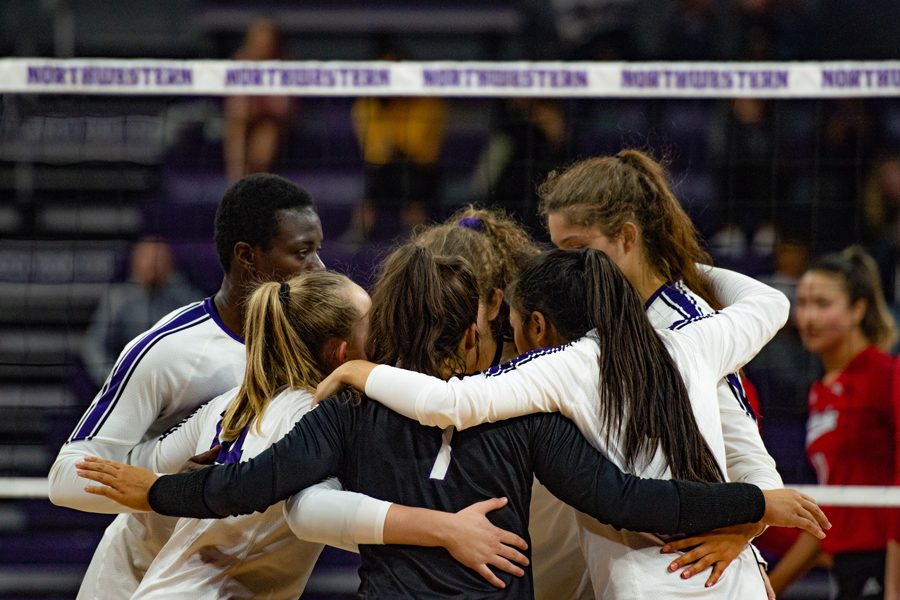 Northwestern gathers for a huddle. The Wildcats will try to pick up its first Big Ten win Saturday against Purdue.

In five conference matches this season, Northwestern has won a total of two sets. Against ranked opponents, the Wildcats have won zero. They’ll look to change that this weekend as they take on No. 20 Purdue on Saturday at Welsh-Ryan Arena.

The Boilermakers (10-4, 2-3 Big Ten) have also struggled in conference play, losing all three of their matches against ranked conference opponents and barely pulling out a win against Indiana on Wednesday. Their only other conference win came in straight sets last week against NU (9-8, 0-5).

Purdue was also playing in front of a sold-out crowd last week in West Lafayette, so Davis said he hopes the Cats can “swing a couple points and rallies” at home.

NU also struggled in Wednesday’s game against No. 7 Wisconsin, losing in straight sets. Sophomore setter Kiara McNulty said she saw some positives despite the loss.

“I think we had some good offensive moments,” McNulty said. “And then I definitely think there’s also some things to clean up before we face Purdue on Saturday.”

The Cats’ last win against the Boilermakers came in 2016 at home. That win is also the last time NU has beaten a nationally ranked opponent.

Statistically, the Cats have outperformed Purdue across the board, having a higher hitting percentage and more kills, assists, service aces and digs. However, NU has also committed more attack errors, service errors and receiving errors.

A big contributor to the Cats’ inconsistency is a series of injuries that have plagued NU all season — namely sophomore outside hitter Ella Grbac and junior opposite Danyelle Williams. Davis said he believes the team is getting healthy again and improving because of it.

“We’re starting to get everybody back, which makes for better practices,” Davis said. “We just gotta get them up to speed a little bit.”

The Cats’ schedule won’t get any easier following Saturday’s game against Purdue.

NU will face two top-10 teams in No. 6 Minnesota and No. 7 Wisconsin next week. In all, the Cats will face six ranked opponents in their first eight conference games.

Davis said he’s confident the team can be competitive against the Boilermakers.

“We can play with the best of the best,” Davis said. “We’ve just gotta be able to do that on a consistent basis.”