Men’s Soccer: Stagnant offense leads to a 2-0 Northwestern loss at the hands of Loyola 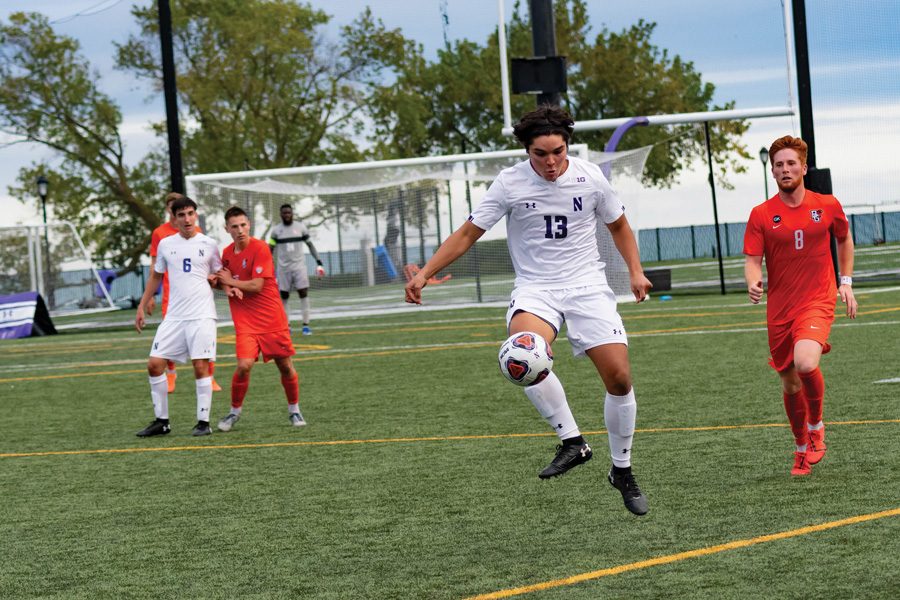 For the second straight game, Northwestern finished without a goal on the board.

“(You) always have to give your best effort. But I thought we got outworked,” coach Tim Lenahan said. “I didn’t think we were mature enough to handle all the energy they had. It’s the second straight game we got thoroughly outplayed.”

With Miha Miskovic feeling “a little under the weather” according to Lenahan, senior goalie Robbie White got the start in goal.

During a save attempt, White punched the ball into the air. After the ball landed, a NU defender tried to clear it, but he accidentally kicked it to Aidan Megally, who took a shot that rebounded off the foot of a Cats defender and redirected into the goal. This gave the Ramblers some early momentum.

Aside from two corner kicks within the first six minutes, NU struggled to sustain play near Loyola’s goal. In the 34th minute, the Cats had a chance to score when senior midfielder Matt Moderwell crossed the ball to freshman forward Ugo Achara Jr.

However, Ramblers goalie Marcel Kampman snagged the pass in the air. By the end of the half, NU had taken no shots and fouled Loyola four times.

But the second half presented more opportunities for the Cats to tie the game.

In the 58th minute, Moderwell evaded a Rambler defender, and as he sprinted down the center of the field, he saw senior forward Ty Seager, already responsible for two earlier shots, unguarded. Moderwell passed to the wide-open Seager, but he kicked the ball too far, and Kampman came in for the save.

After the shot, Seager slid into Kampman and received a red card, forcing NU to play with 10 men for the remainder of the match.

White improved after the early goal, making a sliding save during the 52nd minute. However, Loyola continued to pepper the senior with shots and finally in the 81st minute, Megally fired a rocket into the bottom left corner for his second goal of the night.

The Ramblers finished the game with 11 shots.

The Cats were missing point leader Bardia Kimiavi during the loss. Out for the second straight game with a “lower-body injury,” Lenahan said Kimiavi’s absence contributed to some of the team’s offensive struggles.

Lenahan added that NU’s tough schedule is taking a toll on the squad. The Cats have played six games over the past 19 days — four of them against opponents who rank in the NCAA top 50 for RPI.

Lenahan said NU needs to stay focused as they prepare to play Penn State this weekend. Although he says the schedule will “lighten up” after their match in State College.

“Going from Maryland to now, we knew this was going to be a grind.” he said.