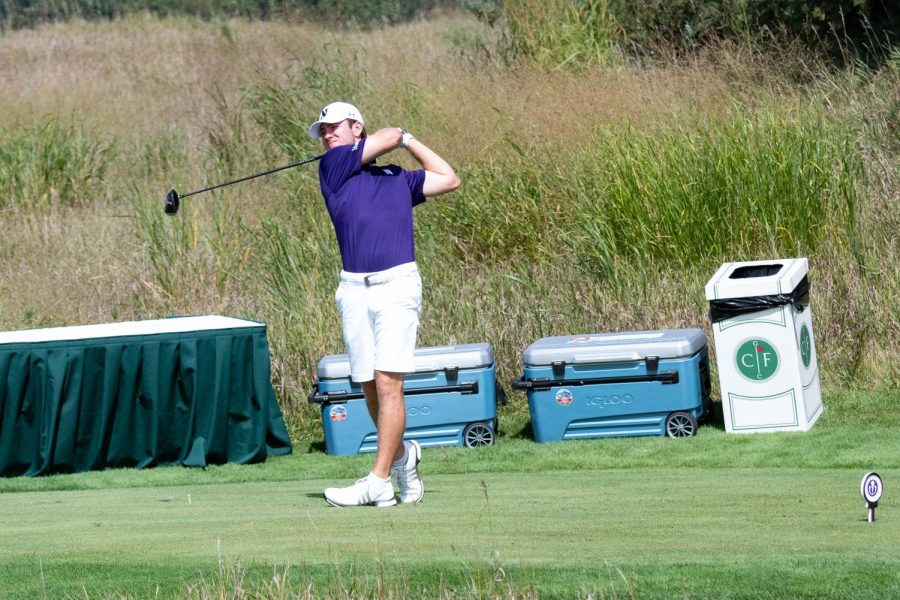 John Driscoll III follows through on a swing. The freshman’s final-round 66 at Erin Hills represented the lowest round of the Marquette Intercollegiate tournament.

Northwestern will take to the links Monday for the Crooked Stick Collegiate tournament in Carmel, Indiana — its final tournament of 2019 and its third consecutive competition at a former major championship course.

The Wildcats competed at Olympia Fields — host of the 2003 US Open — in September and 2017 US Open host Erin Hills last weekend. Both courses are ranked in Golf Digest’s annual list of the top courses in America —- Olympia Fields is No. 75 and Erin Hills is No. 42. Crooked Stick also checks in at No. 99.

The two-day affair features a slightly larger field than last weekend’s Marquette Intercollegiate tournament, with 14 teams teeing off at the Crooked Stick.

Ball State, Indiana, Marquette and Purdue also competed with the Cats at the Marquette Intercollegiate. NU beat the Cardinals, Hoosiers and Golden Eagles by at least 13 strokes apiece, but fell to the Boilermakers by two strokes.

Purdue was the only team better than the Cats at Erin Hills, as NU rode a 13-under-par final round as a team to a second-place finish.

“We try not to have a lot of expectations coming in,” coach David Inglis said. “I’m proud of the guys. [They] came ready to play.”

Freshman John Driscoll III, sophomores Yannick Artigolle and David Nyjfäll, and junior Eric McIntosh all tied or surpassed their lowest rounds of the season to date. Driscoll’s final round was especially notable, as the Florida native shed five strokes off his previous best score, which he achieved in September’s Windon Memorial Classic.

“Everyone can feel good about contributing,” Inglis said.

As was the case at Erin Hills, the weather will play a role on Monday. A sunny first round is forecast to give way to a stormy second round Tuesday afternoon. The chance of thunderstorms increases as the day goes on, potentially introducing variables such as delays and a soft course.

The Crooked Stick Collegiate marks the conclusion of the NU’s autumn season, with the Cats taking a four-month break before resuming play at the Big Ten Match Play in Palm Coast, Florida on Feb. 7, 2020.