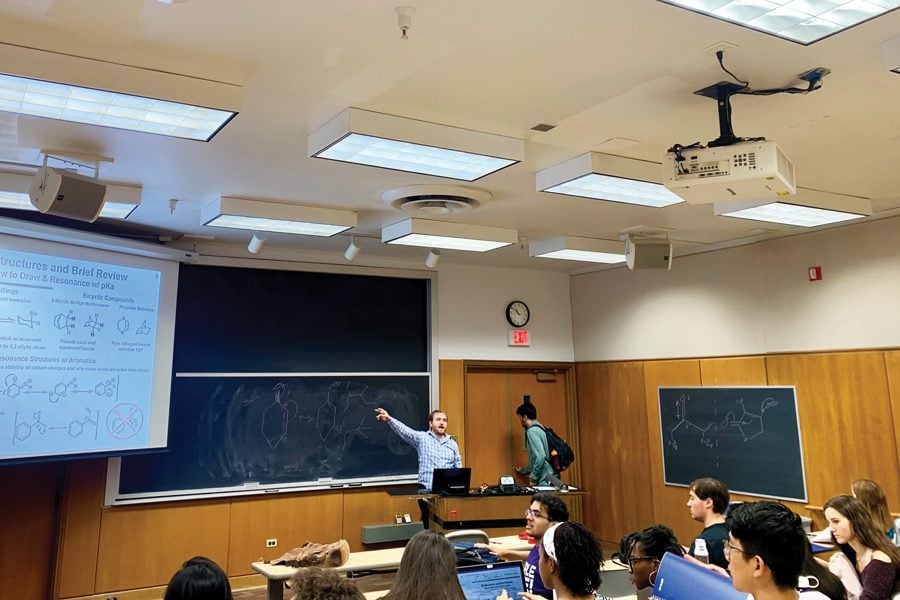 An organic chemistry lecture. Organic chemistry at Northwestern is a three-quarter path that undergraduate students pursuing specific majors involving chemistry are required to take after completing or placing out of the general chemistry sequence.

The organic chemistry sequence offered at Northwestern — notorious among Northwestern students for its difficulty — has forced some students to resort to re-taking the course at other universities or taking it over the summer quarter to complete it.

Organic chemistry at Northwestern is a three-quarter path that undergraduate students on the pre-med track or pursuing specific majors involving chemistry are required to take after completing or placing out of the general chemistry sequence.

Fariha Ahmed completed the second semester of organic chemistry at Loyola University Chicago. The Weinberg junior said she dropped the sequence after one quarter at Northwestern because she was unsure of whether she was going to continue on the pre-med track.

“The way it lined up was my first quarter at Northwestern covered everything they covered in Loyola for that one semester, with the exception of a couple of concepts here and there,” Ahmed said.

One of the more difficult topics taught in the class, for example, involves visualizing molecules on paper, which can be exceptionally challenging since molecular models involve a three-dimensional arrangement of atoms, Gianneschi said.

The slight departure from doing hard calculations to learning through a more conceptual lens is something that students and most people find challenging, Gianneschi explained.

“I know that students find (the sequence) difficult because it is famously described that way,” Gianneschi said. He described the sequence as being similar to an upper-division class, although it is listed as a 200 level course.

Some students said the difficulty of the course itself is compounded by the fast-paced nature of the quarter system.

Eileen Medina, a Weinberg sophomore on the pre-med track, is taking the first class of the sequence this fall. She said although the material thus far has not been too challenging, she anticipates a difficult quarter ahead.

“It’s just a lot of details and you have to keep track of everything,” Medina said. “Lots of information gets thrown at you and you somehow have to make sense of it all in your mind. Because (Northwestern) is a quarter system, (the coursework) is all rushed.

Medina called the sequence a “major changer” because the sequence forces many students to give up on the pre-med track.

Weinberg junior Kumu Myla, who is majoring in neuroscience and took the sequence last year, said the course was manageable, but advised sophomores against taking the sequence with other science classes.

“If you were taking other science classes, then it would be hard to manage,” Myla said. “Doing orgo alone was better than taking it with the bio sequence, for example.”

Medina explained that maybe if the class was taught at a slower pace — with opportunities to walk through one or two practice tests during lectures with the professor — students would have more time to get a better grasp on the material.

“I feel like they are doing everything they can to make (the class) as bearable as possible, but it’s just a hard class that you have to get over with,” Medina said.