2020 Breakdown: Where do the top polling democratic candidates stand on higher education policy? 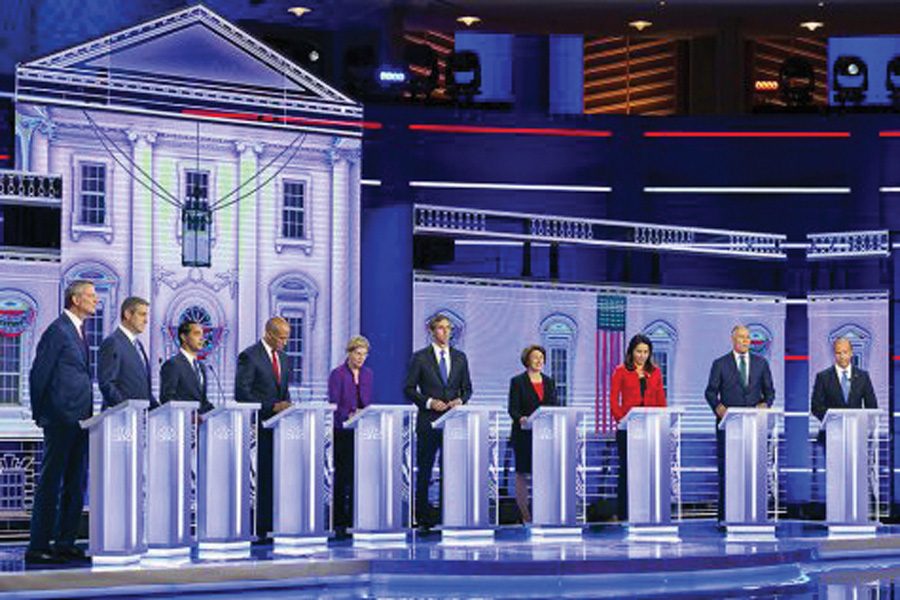 Ten candidates appear onstage during the third round of debates in Houston. The event took place at Texas State University, a public historically black college.

In a crowded field, Democratic candidates for the presidential nomination have called for varying degrees of higher education, distinguishing themselves from the pool.

There are currently 19 candidates in the race. Throughout the primary, they’ve laid out their respective plans for affordable higher education.

The Daily broke down the policies of the seven candidates polling at or above 2 percent, according to the site RealClearPolitics.

The progressive senator expects to pay for her plan with a 2 percent annual tax on household assets over $50 million and another one percent tax on wealth over $1 billion. It’s estimated to cost $1.25 trillion over 10 years.

Biden has yet to launch a policy plan for tackling surmounting student loan debt and rising public college tuition costs.

During a conversation with a student at Keene State College, the former vice president said he plans to reduce monthly student loan payments for repayment plans that are a proportion of the student’s monthly income. He proposed cutting the fraction of disposable income people are required to pay on the loan from 10-20 percent to 5 percent.

Sanders continues to be the favorite among Democrat and Democrat-leaning U.S. college students, according to last week’s Chegg/College Pulse poll. Sanders has actively called for university finance reform throughout his campaign.

The senator announced multiple recommendations for higher education policy, including the College Act for All, a bill to forgive all existing student loan debt and to make all public colleges, universities and trade schools tuition free.

Though critics have questioned its feasibility, others have praised Sanders’ plan for removing requirements for students to reapply for financial aid every year and the cap on new student loan interest rates.

Sanders also vocalized support for work study reforms to expand the number of students and colleges that can participate in federal work study programs and offer part-time employment by tripling the program’s funding. To fund his policies, Sanders has proposed a “Robin Hood Tax” on Wall Street — imposing speculation fees on stock trades, bonds and derivatives.

Unlike Sanders or Warren, Mayor Pete Buttigieg does not want free college for all, though he’s the only front runner with their own student loans and would likely be the first president with student loan debt, according to the Associated Press.

Instead, Buttigieg proposes debt free college for students from low-income and middle-class families. During the first democratic debate, he made his position clear.

“I just don’t believe it makes sense to ask working-class families to subsidize even the children of billionaires,” Buttigieg said. “I think the children of the wealthiest Americans can pay at least a little bit of tuition.”

Beyond tuition costs, Buttigieg’s policy for affordable higher education also calls for a $25 million investment in historically black colleges and universities and other minority-serving institutions, along with an expansion of Pell Grants that keep up with the pace of inflation.

Of her opponents, Harris is one of the few candidates to mention a plan to target for-profit education and lenders. With previous experience taking down one of the largest for-profit college scams in the country, the senator said she will “crack down” on the industry if elected.

She also proposed closing the wealth gap among black Americans through higher education. As the only graduate of a historically black college and university running in the 2020 election, Harris said in July that she wants to invest $60 billion in science, technology, engineering and math education at HBCUs and other minority serving institutions.

The policy would allocate $10 billion to build classroom and lab space and $50 billion for funding scholarships, fellowships and research.

This comes in addition to her broad-sweeping plans to tackle the “runaway cost of college” through calls for “debt-free” four-year colleges and free community college. Harris has not explained she’ll fund either option.

Yang has a number of plans for higher education policy, none of which offer quantitative solutions to college affordability. Yang instead questions the value of higher education and believes that the U.S. is “overselling” four-year colleges.

“As we have tried to plow more people into college, we’ve brought down the college completion rate,” Yang said.

The entrepreneur advocated for vocational schools and community colleges, which he believes will address the imbalances caused by “overprescribing” college and undersupporting vocational trades.

However, he urged colleges to address affordability by increasing administrator-to-student ratio from the current 1-to-21 to 1-to-30.

“Schools need to get back to their ideals – education in service of their students and their country,” Yang said on cost control in higher education. “To do so, they need to get their tuition under control.”

O’Rourke said “no American should be prevented from living their lives” because of student debt.

The former congressman put out proposals over a variety of issues in higher education, including funding for HBCUs, refinancing interest rates and cracking down on the “predatory” practices of for-profit institutions.

However, on the topic of free college for all, O’Rourke charted a different path than his more liberal opponents. He proposed increased grant aid in a partnership between the federal government and states in order to provide a debt-free option for low-income and middle-class students.