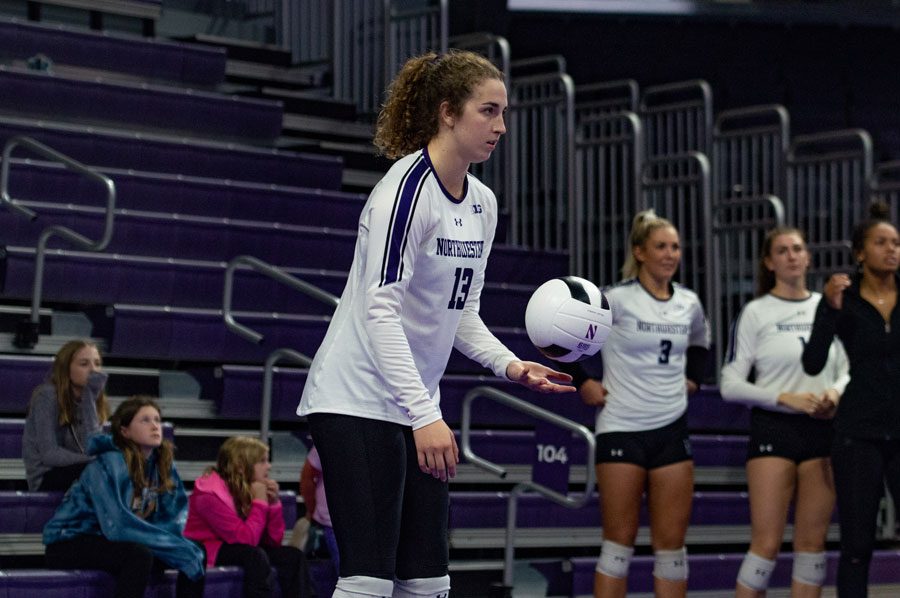 Olivia Viscuso prepares to serve the ball. The senior middle blocker is second on the team with eight service aces.

For the third time in four years, Northwestern has an 0-4 conference record. And, with four consecutive matches against ranked opponents coming up, the Wildcats are in danger of falling to 0-8 in the Big Ten for the second straight year.

NU (9-7, 0-4 Big Ten) kicks off its difficult stretch against No. 7 Wisconsin on Wednesday at Welsh-Ryan Arena. The Badgers (8-4, 4-0) have momentum on their side after upsetting then-ranked No. 5 Penn State and No. 2 Nebraska last week.

Wisconsin setter Sydney Hilley was named National Player of the Week by the American Volleyball Coaches Association following superb performances in those two matches. The Badgers also have a slew of other offensive weapons, with three players in the top 15 in the Big Ten in kills per set.

The Cats, on the other hand, lost in straight sets to No. 17 Purdue last Friday before losing to Indiana 3-1 on Saturday. Despite the losses, NU remained competitive, scoring more than 20 points in six of seven sets. Coach Shane Davis said the team needs to find a way to win the close games.

“We struggled at executing in high-pressure situations,” Davis said. “We did a great job getting to some good points in those matches, but we did a poor job of executing when it mattered. That’s the next thing to cross — when the set’s on the line, the game’s on the line, can you execute your touch, your play?”

Execution will be paramount against Wisconsin, as the Cats have recorded 296 attack errors while the Badgers have only 196 this season.

Historically, NU has struggled against the Badgers, with the Cats’ most recent victory over the Badgers coming in 2012. NU also hasn’t beaten a top-25 opponent since 2016. Nonetheless, Davis said he believes his team has a chance to pull off some upsets as the season progresses.

The Cats have shown some promise, as they have outpaced opponents in kills, hit percentage, assists, and digs this season. Freshman outside hitter Temi Thomas-Ailara, who currently ranks second in the Big Ten in kills per set, said team chemistry is a big part of the team’s success.

“We’ve spent so much time together that we’ve become like sisters,” Thomas-Ailara said. “And it’s really nice being in a sisterhood in a new environment.”

Other players have contributed as well. Junior outside hitter Nia Robinson joins Thomas-Ailara in the top-10 in kills in the Big Ten, and graduate setter Payton Chang ranks eighth in the Big Ten in assists.

As it stands, NU will play eight games against ranked opponents over its final 16 games. Even if the Cats drop all eight of those matches, they still have a chance to finish the season with a winning record and make the NCAA tournament. Davis said he feels optimistic about the team’s improvement.

“They’re going about it the right way,” Davis said. “They believe in themselves, believe in what they’re doing, fighting for one another and getting each other better along the way.”