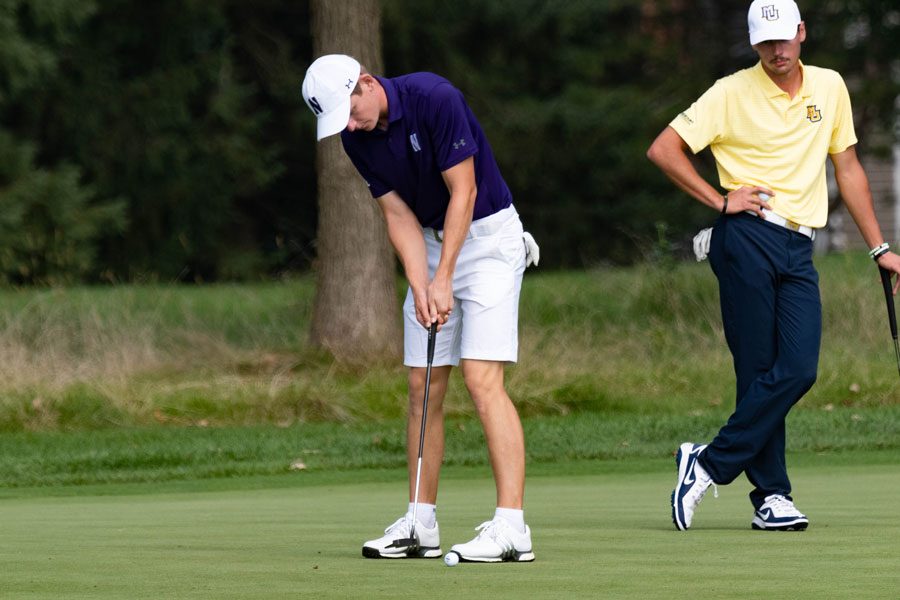 David Nyjfäll hits the ball. The sophomore finished in fifth place with a score of -4 at the Marquette Intercollegiate.

After a slow start in the first round of the Marquette Intercollegiate in Erin, Wisconsin, Northwestern flourished in the second round and put it all together in the third to surge to a second-place finish.

Individually, sophomore David Nyjfäll was the Cats’ top scorer, delivering a trio of below-par rounds and finishing tied for fifth with UCLA’s Eddy Lai at 4-under-par. A final-round 70 firmly secured Nyjfäll’s place in the top five, as the sophomore from Sweden matched his lowest round of the season.

“David’s a great player,” coach David Inglis said. “He feels like he could even have been a little bit sharper. He’s really playing well enough to challenge to win these tournaments. He’s on the right track.”

Junior Eric McIntosh was just a stroke behind Nyjfäll at 3-under, finishing tied for seventh. McIntosh was one of five NU golfers to improve his score from Monday to Tuesday, and he recorded his third top-25 finish of the season.

But the most dramatic improvement from the beginning of the tournament to its end belonged to freshman John Driscoll III who shot 5-over and 2-over before carding a 6-under 66 on Tuesday.

Driscoll’s third round — the Cats’ lowest score this season and the lowest of any player in the entire tournament — catapulted him from 41st to 17th and drew praise from Inglis.

“(Driscoll) wanted to play great today,” he said. “He’s out there kind of leading the way for everyone else… He brings a real contagious energy and enthusiasm to our team.”

The freshman’s 13 birdies were tied for fourth in the field.

Senior Everton Hawkins tied for 30th, freshman James Imai checked in at 47th and sophomore Yannick Artigolle, competing as an individual, was 35th. Like McIntosh and Driscoll, Artigolle shaved strokes off his score every day of the competition.

The key for NU was dominance on par-4 and par-5 holes. The Cats had the tournament’s lowest score to par on both types, with Driscoll and McIntosh leading the way.

However, Inglis acknowledged par-3 holes as an Achilles heel, as NU tied Miami (Ohio) in recording the tournament’s worst score to par at 17-over. The sixth-year coach noted the team is usually “pretty good on par-3,” but practice could help them “find a little bit of distance control.”

“When we put it all together,” Inglis said, “we’re a pretty good team.”