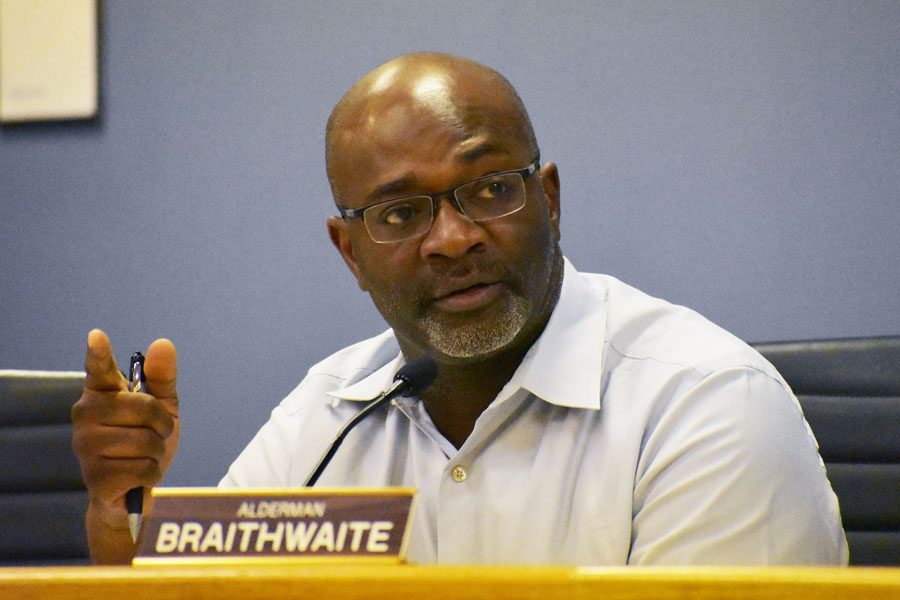 Ald. Peter Braithwaite (2nd) at Monday’s Human Services Committee meeting. Braithwaite emphasized the need for members of the proposed Citizen Police Review Commission to sign confidentiality forms agreeing not to share information they hear in closed sessions outside of the commission.

The proposed addition to the City Code, reviewed at Monday’s committee meeting, would create a commission with the purpose of addressing citizen complaints. The group would consist of nine members, who would serve without compensation and could not be current elected officials, city employees or family members of a city employee.

While the current agreement in place leaves discipline of the officer in question to the chief of police and city manager, the commission would review the department’s internal investigation and evaluate its objectivity and fairness, among other factors.

Members would have the ability to watch necessary videos, including body-cam footage, in their closed sessions.

Because members would be privy to non-redacted body-cam videos, the human services committee amended the ordinance, reinstating a statement requiring members of the commission to sign a non-disclosure and confidentiality form.

“We just have to be very mindful of why we’re asking this committee to be a part of this process,” said Kimberly Richardson, the deputy city manager. “It’s to allow for that community input to ensure that we’re doing the job that we’re supposed to do in these types of situations.”

Under these circumstances, this video footage would be redacted for outside viewers, such as those who FOIA request the footage. Such redactions would include blurring the face of police officers, especially since some officers have greater interaction in the community, which could lead to a higher number of complaints.

Richardson said she doesn’t want members to use previous incidents to make innocent or guilty charges on officers without listening to the content of the video.

Richardson added that body-cam footage is relatively new for the city, and while the city is asking staff to expedite the redaction and review process, a short video could take anywhere from several hours to two days to redact.

Ald. Cicely Fleming (9th) emphasized the need to protect both the identity of a police officer in question, as well as any citizen in the video. When looking to reduce bias, she said, citizens should also be protected since the videos could include footage of the citizens in a vulnerable mental state or list their address.
“I could very well have a bias against the citizen in the video,” Fleming said. “And I could make a judgment based on that, and by seeing the citizen’s face and the number of drinks they’ve had, and all that kind of stuff. So when we’re talking about, in this instance, with the video, and keeping faces anonymous, that needs to go across the board.”

The proposed ordinance also states members of the commission should recuse themselves from any case in which they have a conflict of interest. The code would also prohibit members from making any comments outside of committee related to any pending complaint or investigation.

Ald. Peter Braithwaite (2nd) also brought up the training mentioned in the ordinance for the commission members.

“There’s a training session involved with this that I hope would include the confidentiality agreement and all of those consequences should someone step outside of that committee and share the information,” Braithwaite said.

Violations of these provisions would be grounds for removal from the committee by the mayor, according to the ordinance.

Should the ordinance get approved by Council, the City of Evanston Citizen Police Advisory Committee would be dissolved on Jan. 1.